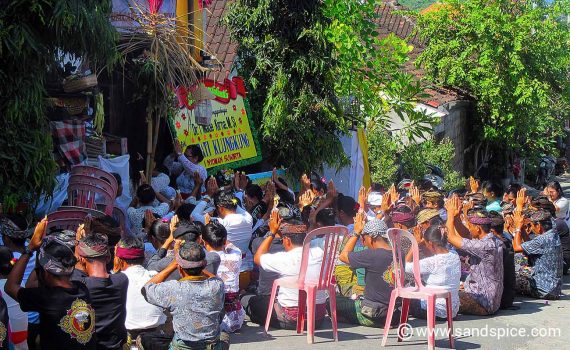 During our 10-day stay in Lembongan, we had several interesting conversations with the owner of our last guesthouse – TS Huts near Mushroom beach. On one occasion he told us there had been a recent death in Lembongan – a member of his own family – and they would be holding the funeral the following day.

He explained it would be quite a busy and colorful affair, and invited us to experience an authentic Balinese cremation ceremony. We’d already had a taste of the vibrant life on the island: Now we would learn a little about the ceremonies related to death in Lembongan.

Death in Lembongan – Invitation to a Funeral

Funeral ceremonies in Lembongan are extravagant events that can cost a fortune for the families and close relatives. Because of these costs, the deceased often have to wait for months – sometimes even longer – while the family gathers the funds to pay for the funeral.

This has led to the practice of families pooling their resources together to combine 2 or more funerals into one ceremony. In the meantime the dead are buried in temporary graves patiently awaiting the big day. When sufficient funds have been accumulated, the families get together to agree on an auspicious day to hold the event. 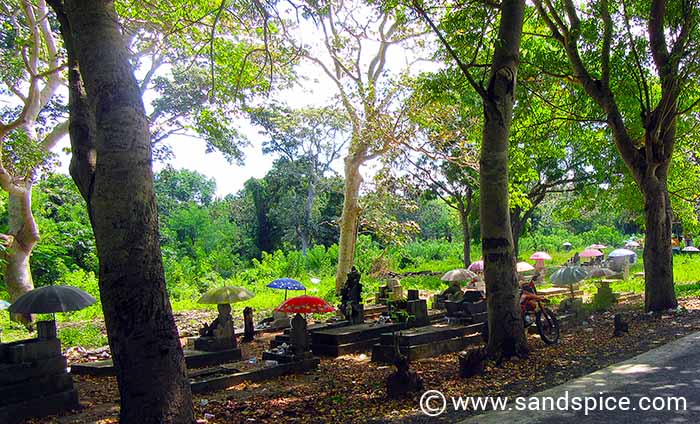 Graveyard close to cremation site: Parasols shade the dead from the sun

On the morning of the funeral we walked over to the temple from where the ceremony would begin. This was not too far from the Warisan guesthouse where we had spent a few days earlier in the week. When we arrived, there were hundreds of family, friends and neighbours in prayer, gathered in and around the temple.

These funeral ceremonies are important events on the island, attracting large crowds. The ceremony can last until late afternoon or early evening. 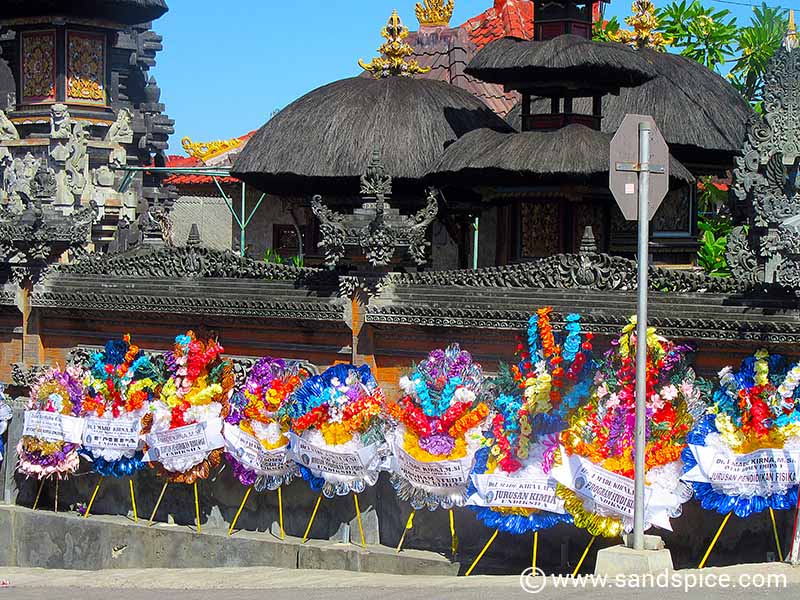 Death in Lembongan – Huge colorful wreaths for the funeral procession

After prayers, the remains of the deceased were raised on brightly decorated wooden towers, and the procession of mourners was formed. They then proceeded to carry the towers along the main street in the direction of the cemetery.

For this event, the police were on hand to divert all traffic away from the center of the island.

Death in Lembongan – The Funeral Pyre

It was a good uphill hike to the cemetery, where everything was prepared for the cremation including the funeral pyre and several large plastic cans of gasoline. 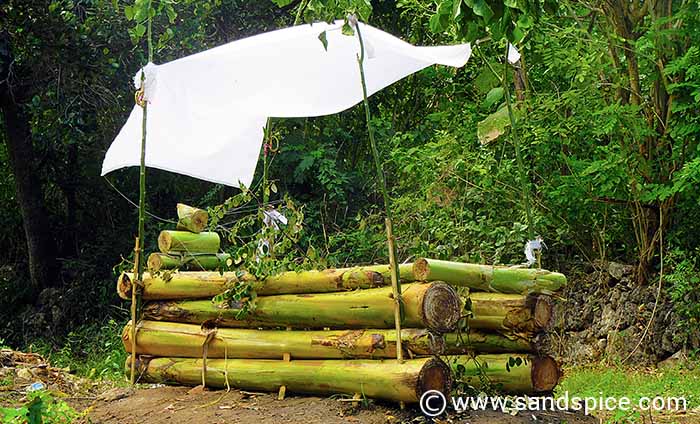 Death in Lembongan – Funeral pyre ready to receive the deceased

The cemetery is in a really pleasant and fairly secluded area of the island, separating the north from the south. The cremation area is in a cleared piece of land just next to the cemetery. Handy as this may seem, the ashes are actually taken away and scattered in the sea. 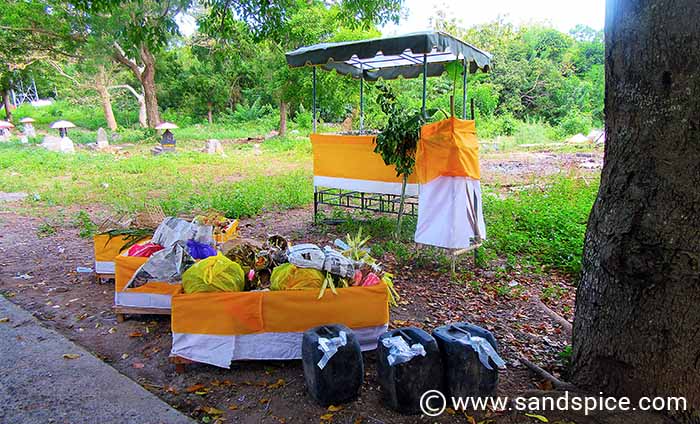 Death in Lembongan – Offerings and gasoline

We appeared to be the only foreigners in the entourage. We therefore considered it best form to leave the mourners to cremate their dead in peace without having strangers looking on.

We passed by the cremation site again the following day to find the charred remains of the funeral pyre. It would soon be grown over by the surrounding jungle…

… at least until there are enough waiting corpses and available funds for the next public funeral. 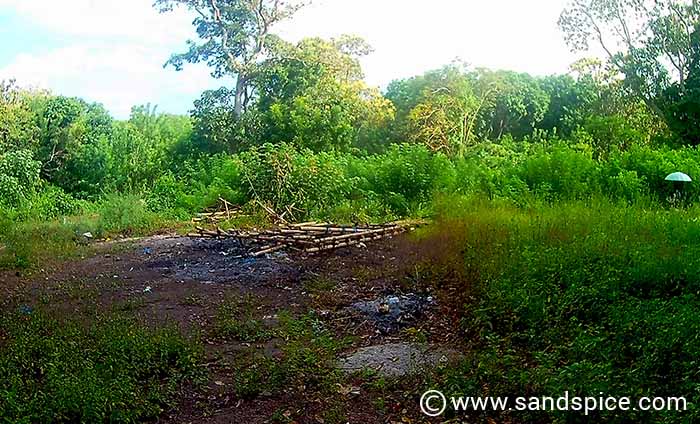 Death in Lembongan – Ashes to ashes

We had only a few more days left to enjoy Lembongan before returning to Denpasar and our flight back home. On the list of things still to do was a snorkeling tour around Lembongan and its sister island – Nusa Ceningan.

From what we had seen so far in the depths around Mangrove Point, we were hoping for a treat.

If you were interested in Death in Lembongan, check out our Bali & Lembongan 2-island itinerary. You may also like: 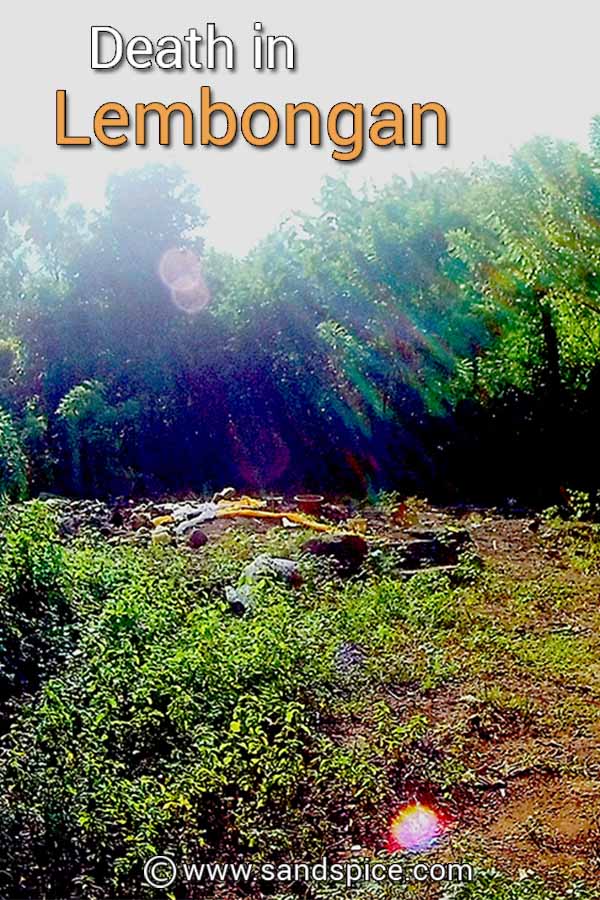 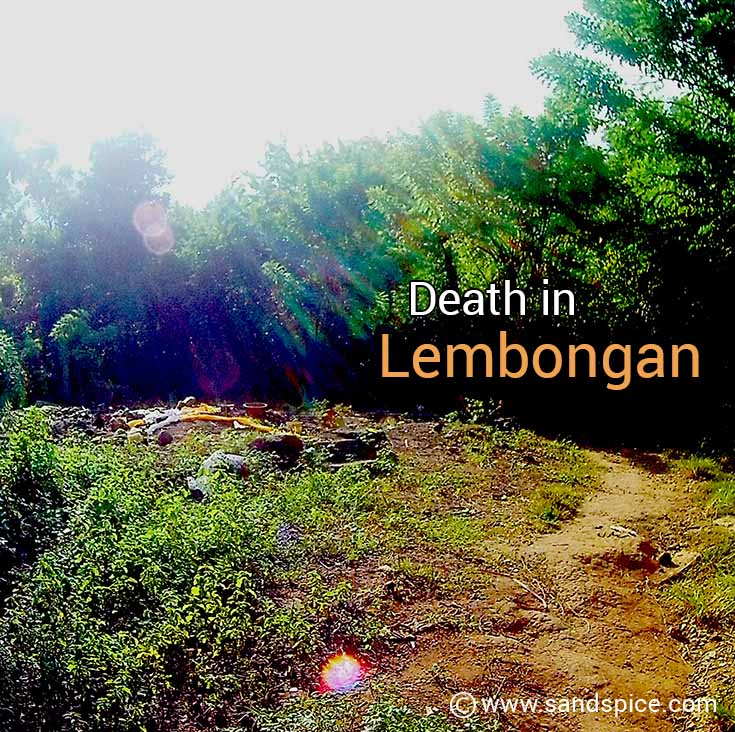