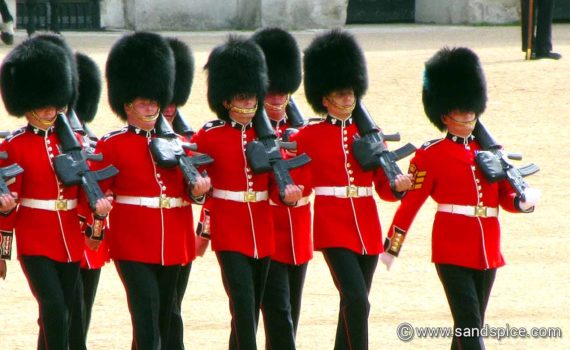 We arrived back in London Gatwick at the end of our multi-stop flight to Hong Kong and Bali, courtesy of Cathay Pacific. With just 12 hours between our arrival at Gatwick and our onward flight home from London Luton airport, we were optimistically hoping to cram in some essential sightseeing on our London city stopover before heading off for the hills.

Luton airport is 80 miles from Gatwick – on the other side of the city. So our time in central London would actually be more like 6 hours since we needed around 2-3 hours to clear customs, travel into the city and drop off our bags, and at least another 3 hours to pick up our bags, travel out to Luton airport and check in an hour before departure. 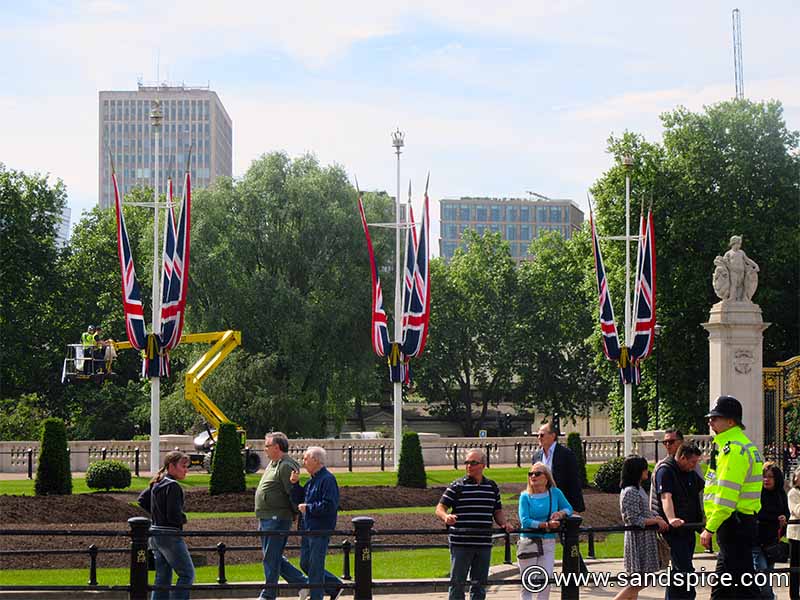 Our London city hit list worked out as follows:

To do all of this we would need to stick to a pretty tight time schedule. 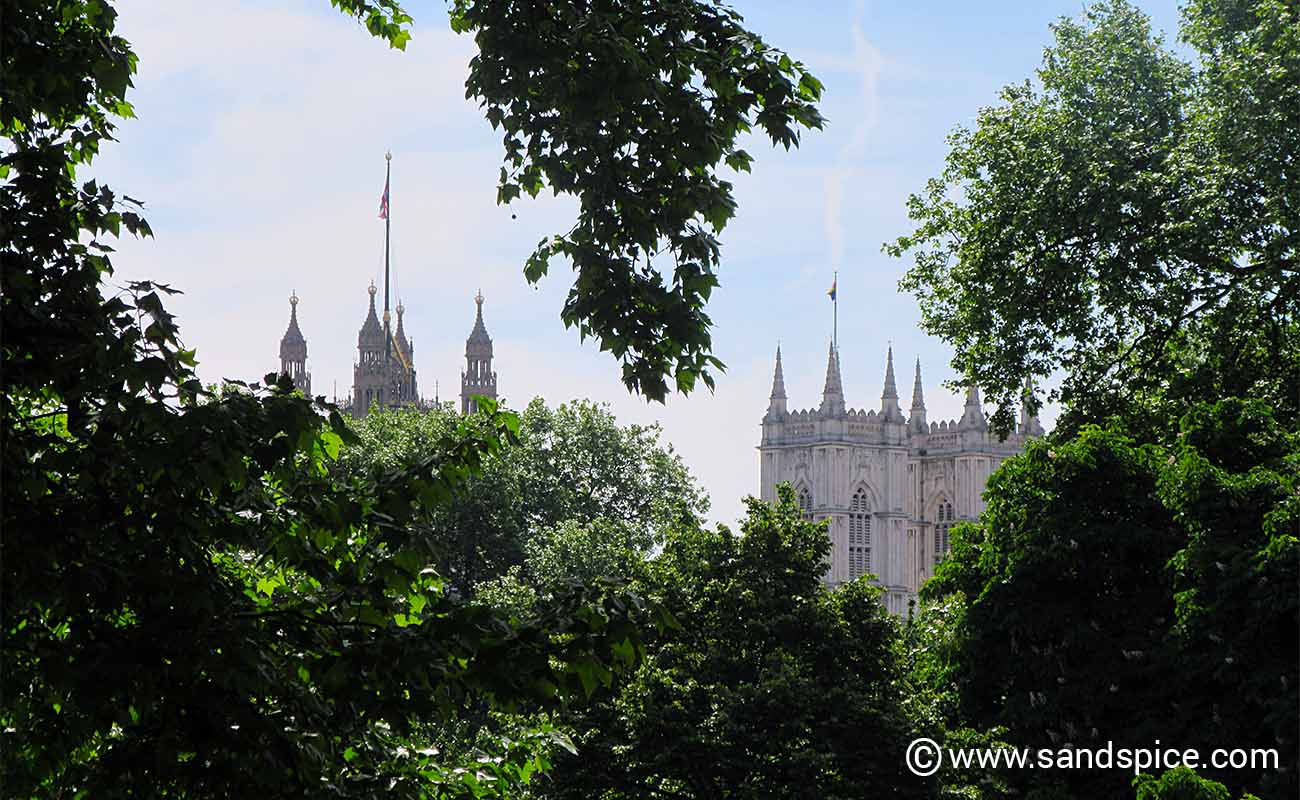 Gatwick to London via National Express

We arrived at Gatwick airport at 07.00 am, having just enjoyed a good breakfast on the plane. From here we spent £40 on 2 National Express coach tickets from Gatwick South to London’s central Victoria Coach Station.

Our plan was to leave our bags at Victoria Coach Station’s left-luggage facility (£5 per bag) while we visited the city.

Victoria to Charring Cross by Foot

If you follow a simple map (… and it’s not raining) you can enjoy a pleasant stroll north from Victoria Coach Station up to Buckingham Palace, St James’s Park and the Royal Mall. There are always crowds of tourists around the Palace, but we were treated to a Guards Parade in the Park, together with a brass band and colorful marching troops. 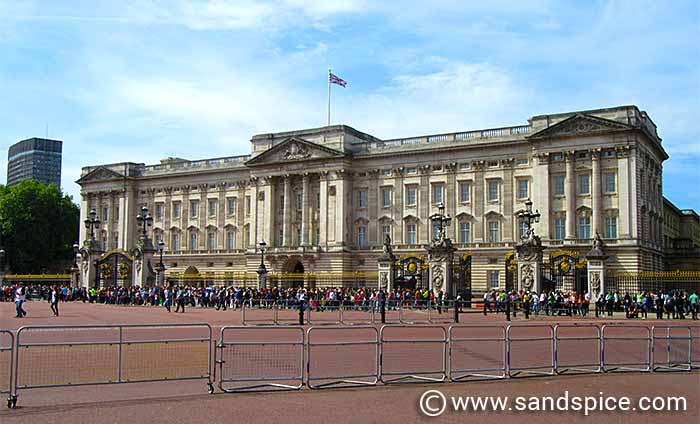 We strolled down the Mall and then passed through Trafalgar Square to Charring Cross. From Charring Cross we took seven stops on the underground to Tower Hill (£4.90 each). 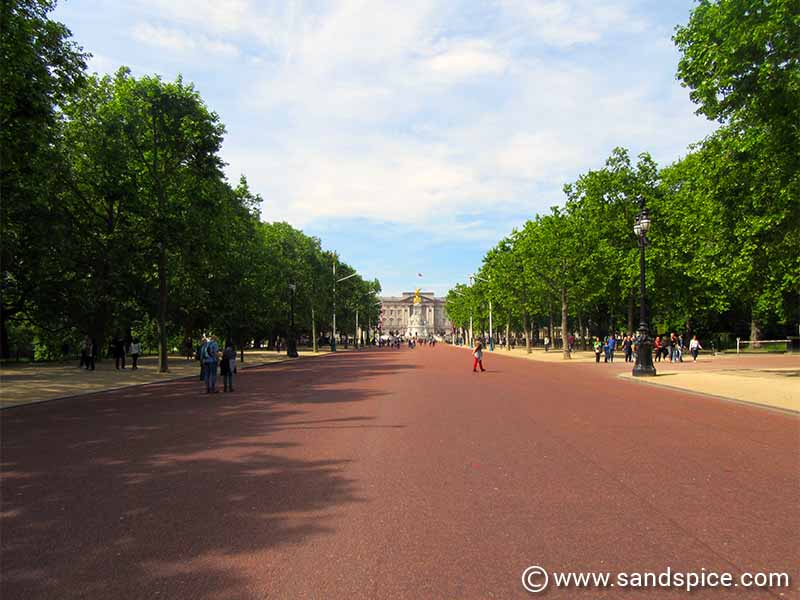 If you plan to visit the Tower of London, make sure you give yourself enough time to do it justice. There are always queues of people, so you need to be patient.

By the time we’d bought our tickets and reached the main entrance gate it was already 11:30 am.

In the grounds, the costumed staff keep the public entertained with lively animations, amusing banter and period recreations.

We took 1½ hours for our tour of the Tower and grounds, but we could easily have spent an extra hour or so. 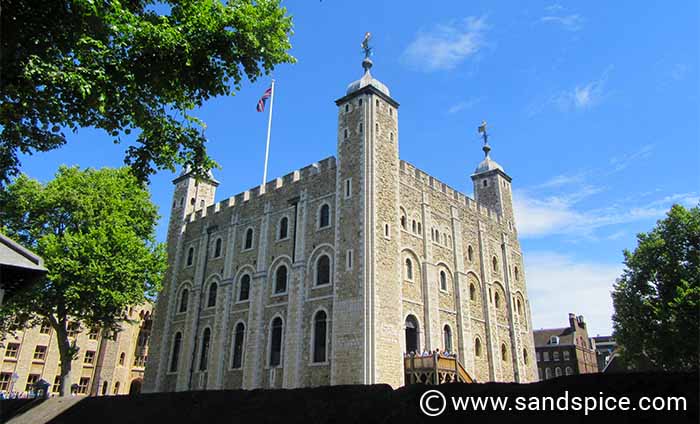 The biggest queues are for the Crown Jewels, but if you’re short on time you might want to skip this. You’ll spend a lot of time queuing to see some quite underwhelming baubles. 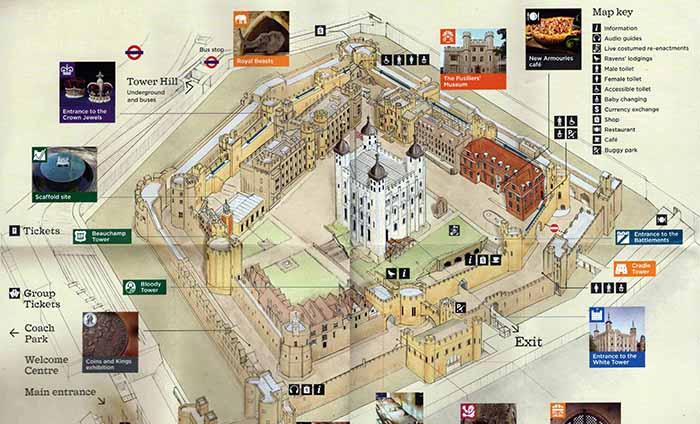 The exit from the Tower is just by Traitors gate on the Thames. From here you get a great view of Tower Bridge in one direction and London Bridge in the other.

Our main concern now however was to get some lunch.

We took the underground again from Tower Hill (the closest station) and headed back to Victoria. It was pushing 13:30 pm and next on our agenda was a decent-looking pub.

A Pub Lunch at the Travellers Tavern

The Travellers Tavern is located just adjacent to coach arrivals at Victoria Coach Station. They serve all-day food and British ales on tap, with outside space to sit.

We had Cod & Chips for 2, together with a pint of draft lager and half a bottle of Cabernet Sauvignon. All for £35. 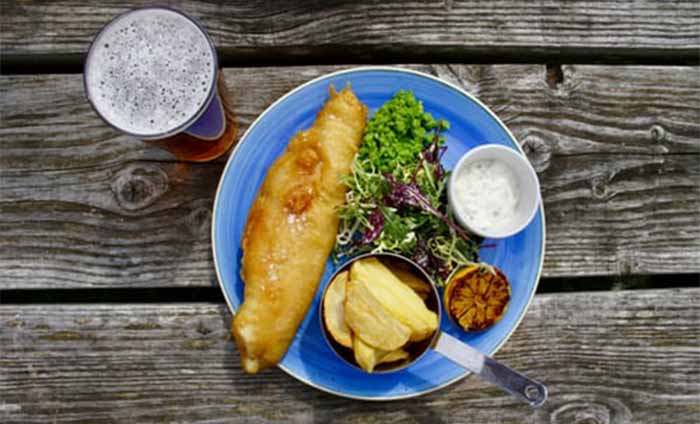 London to Luton via National Express

You should leave yourself plenty of time to reach Luton airport if you’re taking one of the National Express coaches. Traffic is unpredictable and there are usually long queues at airport check-in and security counters.

Since our flight from Luton was scheduled for 19:35 pm, we planned to take a coach from central London at around 15:00 pm

Fortunately the National Express coaches run frequently – 24/7 (at least every hour, and more frequently during the day). Tickets cost £12 per-person one-way and the journey takes around 2 hours (again depending on traffic). 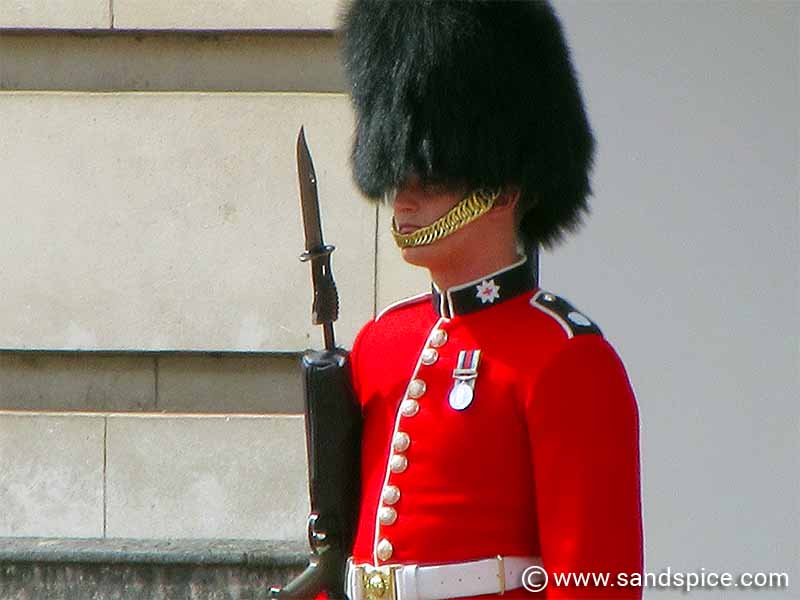 Isn’t that Harry masquerading (again) as a Guardsman?

So we bought our coach tickets, picked up our bags from Victoria Coach Station, and boarded the coach just after 15:00 pm.

The trip from central London to Luton airport did indeed take around 2 hours, so we arrived in good time for our flight out.

Our one-day whistle-stop tour of central London cost £190 for the 2 of us – including fares in and out of the center.

The End of our London City Stopover & Multi-Stop Bali Trip

This was also the end of our 18-day itinerary to Bali & Lembongan, including a slightly more leisurely 2 night stopover in Hong Kong. Did we manage to stay within our €1,089 budget per person?

Look out for our final article in this series, coming soon…

If you enjoyed our London City Stopover, check out our Bali & Lembongan 2-island itinerary. You may also like: 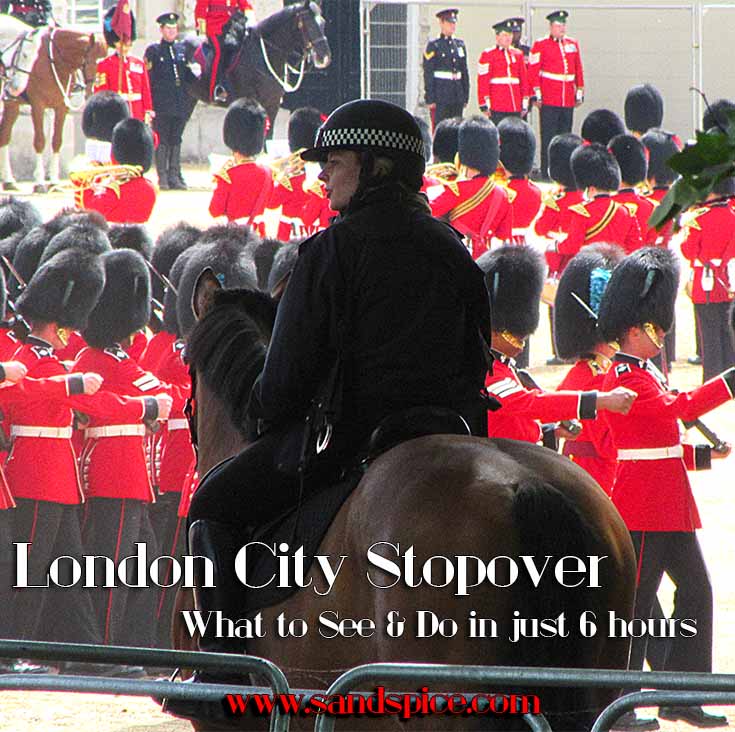 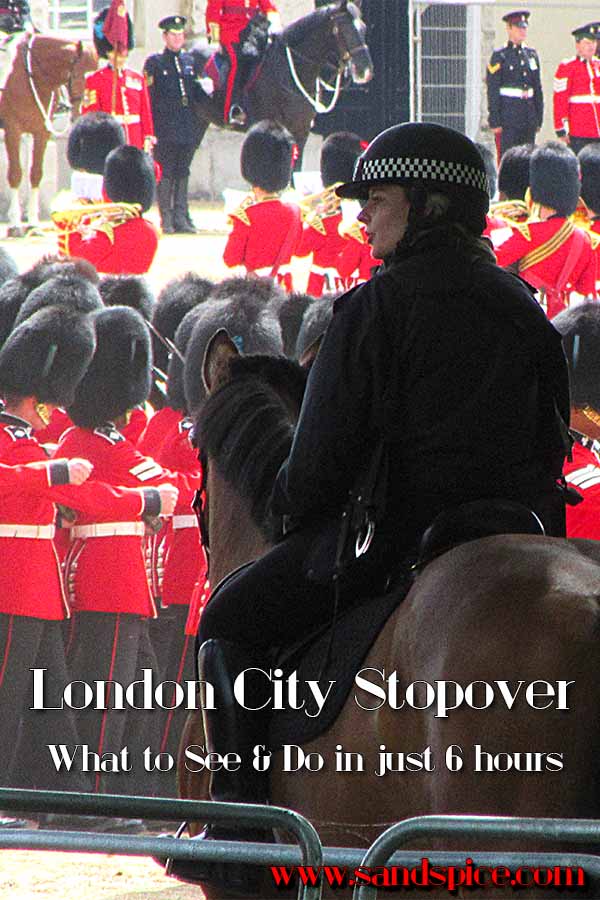