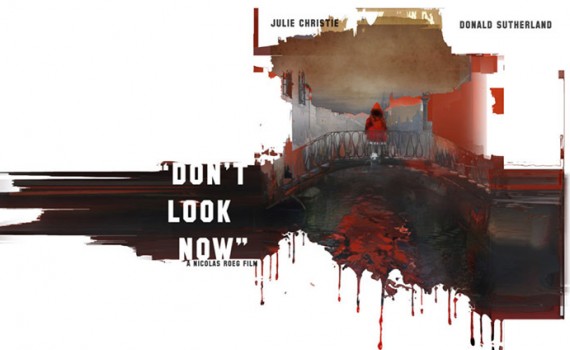 If like us you’re a bit of a movie fan, then this section is for you. The Venice of Don’t Look Now is encapsulated in a 1973 British-Italian thriller directed by Nicolas Roeg, adapted from a short story by Daphne du Maurier.

It was filmed at a variety of locations throughout Venice, showing a seedier, grittier side of the city.

In the evening, inside the dank alleyways is a silent, eerie feeling.

Keen to get away from the glitz of the “must see” sites of Venice, we organized our routes around the city to include locations from the movie. This had the added bonus of taking us off-track to areas that we probably would not otherwise have visited.

Our first location from the Venice of “Don’t Look Now” was the Ristorante Roma, right next to the Ponte degli Scalzi (vaporetto stop Ferrovia). 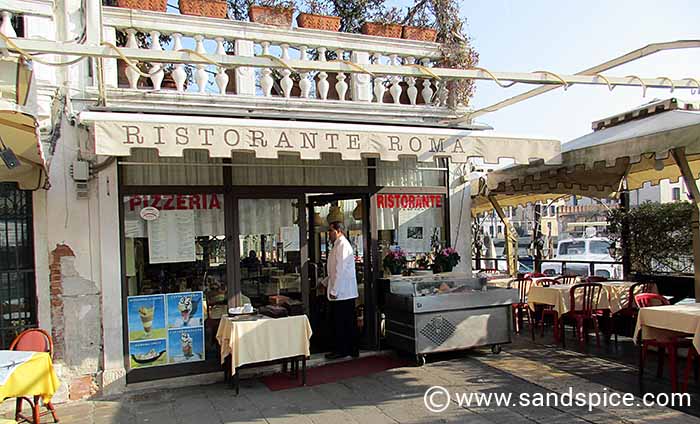 Ristorante Roma from the Venice of “Don’t Look Now”

This restaurant is where Julie Christie and Donald Sutherland first meet the two psychic sisters early on in the film.

Unfortunately, this restaurant doesn’t get very favourable reviews, so we declined the waiter’s invitation to find us a table. Instead, I took a couple of pictures of the outside terrace from the bridge overlooking the restaurant. 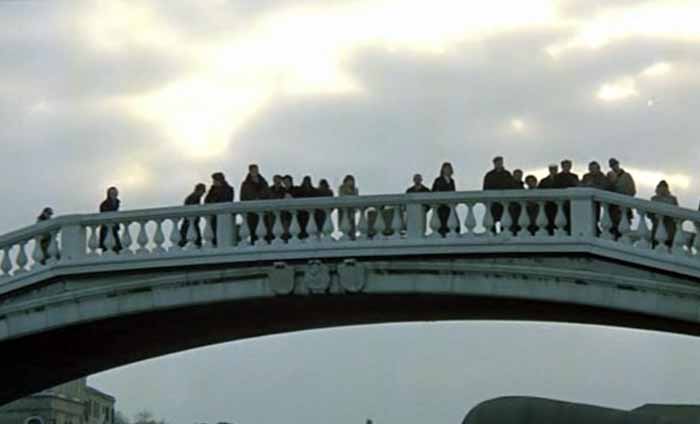 This is the bridge shown in the movie (above). Here, local onlookers were filmed watching Julie Christie being taken away in the water ambulance just outside the restaurant.

Our next location was the church of San Nicholo dei Mendicoli. This is in the Dorsoduro district of the city on the south-west edge of Venice. 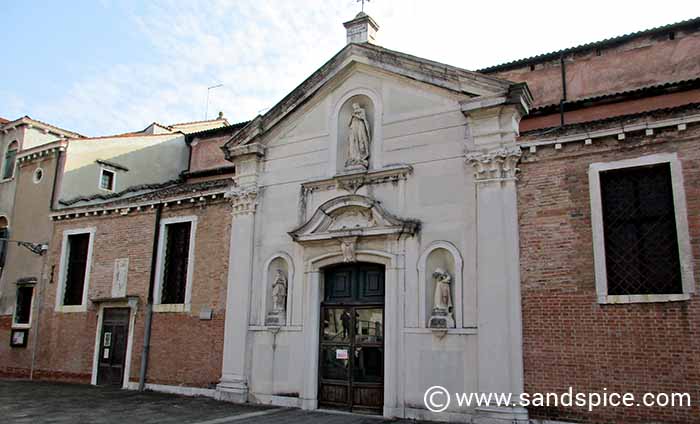 In Don’t Look Now this is the church where Donald Sutherland is found precariously trying to position a statue outside the church from the top of a ladder. He later has a near-fatal fall inside the church.

Julie Christie and the two sisters also appear in this scene. 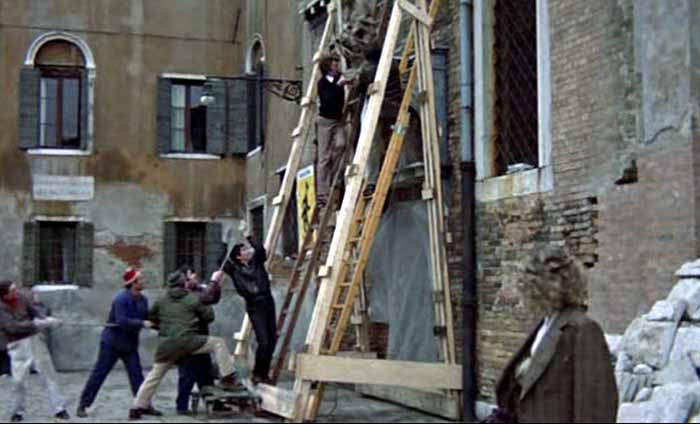 Donald Sutherland on the ladder: Julie Christie in foreground

We took a vaporetto to San Basilio in the south, and walked westwards as best as we could tell (our map didn’t extend this far out). What we found was a university area, with plenty of relatively cheap snack bars and cafes.

This area is really picturesque, with lots of narrow canals and small bridges.

When we found the church, it had unfortunately just closed for the afternoon. It looked a little run-down, pretty much as it had looked when they made the movie in 1973.

As portrayed in the film, it was actually restored in the early seventies. Since then, nearly another 50 years has passed and another restoration is definitely due.

Our third location was the area immediately surrounding the Palazzo Grimani and the Calle de Mezzo: A tricky area to find in the central Castello district.

In the movie, this is where Donald Sutherland pursues the figure in the red pixie hood, leading up to the climax of the film.

We were visiting Venice at a similar time of year as when the film was made, and in the evening (or at any time of the day inside the dank alleyways) there is a silent, eerie feeling.

During visiting hours, you can also take a look around the courtyards inside Palazzo Grimani.

Our final location was the church at San Stae on the Grand Canal. The vaporetto stops right outside the church, so this spot was a no-brainer to find.

This is where Julie Christie and the sisters arrive by boat in the final scenes of “Don’t Look Now”. Very little has changed here in the intervening 40-odd years. 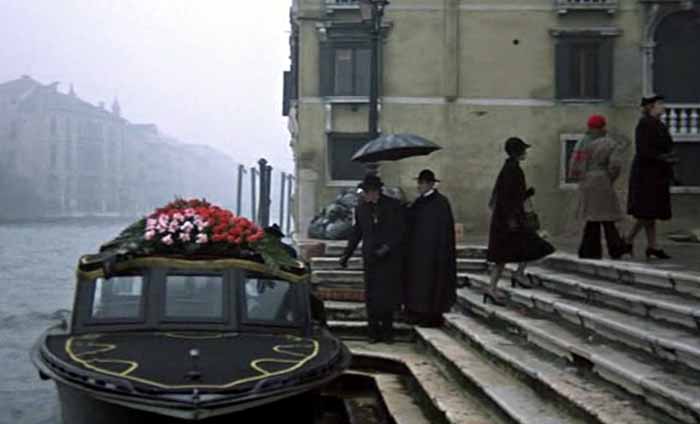 The Venice of Don’t Look Now

At the time we arrived, the church was open for visitors. When entering, however, we were asked to pay €3 each for the privilege of walking inside. I’m not an advocate of paying entrance fees to an active place of worship, so we declined.

Incidentally, the area around this church is well worth a wander, with some unique photo opportunities.

There are a few more locations from the movie to discover, but there’s only so much you can pack into a 2-day visit.

If you find any of these places interesting, post a comment in the form below. I can save you some time by sending you a map marked with their precise locations.

If you enjoyed The Venice of Don’t Look Now, check out our other Short-Break destinations. You may also like: 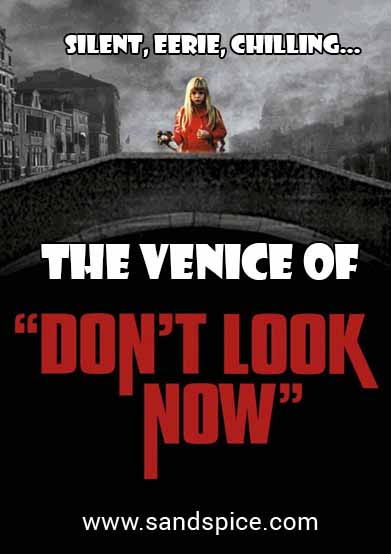 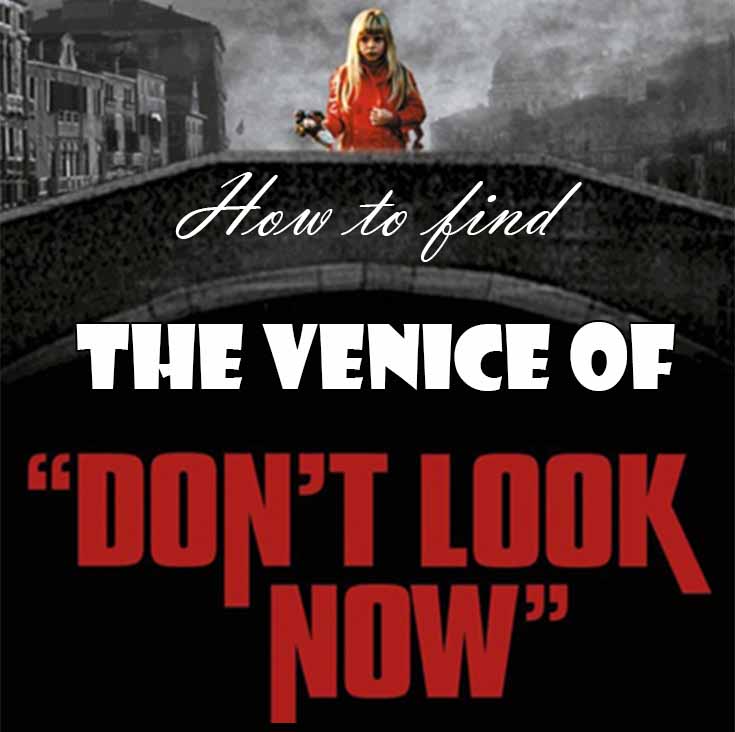 We were there this May 23, 2019. Sad to say all of Venice was teeming with tourists! Would need to come back to Venice off season, to see it as in the movie Don’t Look Now. But hopefully one won’t have to deal with flooding in said season!

The only problem we had visiting off-season was the cold – It was real brass-monkey weather!(especially out on the boats).
Although there are attempts to regulate the number of tourists in the city at any given time, I’m afraid visiting Venice in the warmer months will just get more stressful.

Hello, I would be glad to receive the map that you have offered. As author of CELLULOID SAN FRANCISCO I am obsessed with the matter of film locations.

Hi Will,
Let me get back to you on this. I’ve been rooting through my old files and have found the Venice location map I’d started: I just need to add a couple more places: should be ready in the next couple of days…

The external location for where the sisters stays as I’ve found through research is Hotel Le Fenice et des Artistes. Google it you will find it.

Thanks for that – Gives us another excuse to go back (not that we need it).
Enjoy your trip in May!

I intend to visit all locations this May as I am going to venice then, thanks for article

If you find more filming locations for this movie, do let us know.
We had trouble finding the external location for the hotel where the sister’s were staying (places rarely stay the same…)

Loved the movie – A plus was the scenes of gritty Venice. During three stays in Venice over the years I have been enchanted with Venice’s seamy side, especially a vaparetto trip thru the back waters. The last 2 week trip was especially enjoyable since it was in November when most of the tourists (except for many Germans) had left.

Hi Gemma,
We liked the movie too, and spent much of our time looking for the film locations. I heard they might be remaking the movie, which I think would be a mistake. Apparently Donald Sutherland was not very keen on the idea of a remake either…