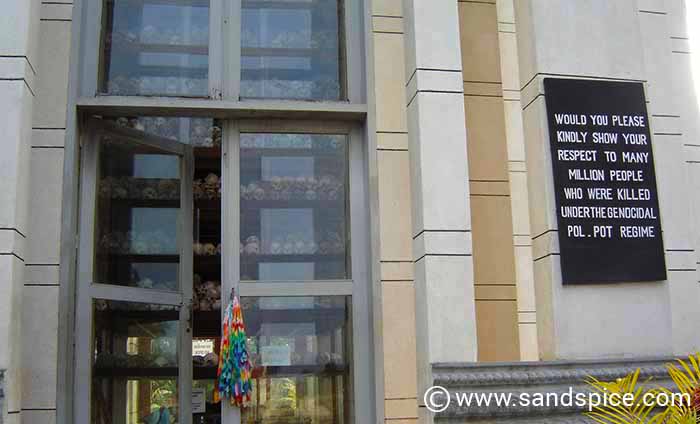 We travelled to Cambodia by boat from Vietnam, passing up through the Mekong Delta from Chau Doc. When we disembarked, we hopped onto a crowded minibus to take us to our hotel in Phnom Penh.

Our agenda for the following day was a visit to the the Killing Fields of Choeung Ek as well as the Tuol Sleng Genocide Museum.

NOTE:
The following article describes the memorials that remain of the Pol Pot years in Cambodia. The narrative and images may be upsetting for some readers. 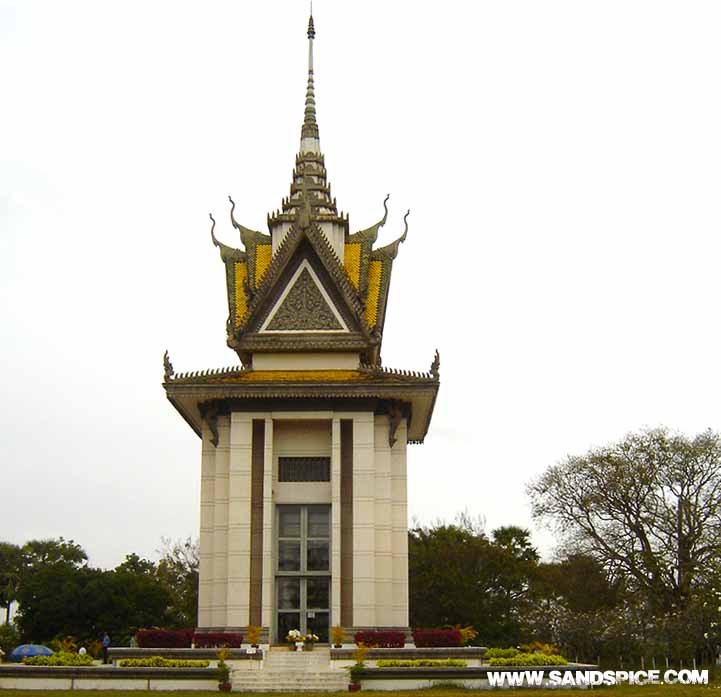 On our first morning in Phnom Penh, we visited Choeung Ek – 15 kilometers south-west of the city.

This is a memorial to the 1.5 to 2 million people, mainly Cambodian civilians, who were systematically arrested, interrogated, photographed and executed by the Khmer Rouge. This took place in the surrounding fields and in many other places throughout the country.

Choeung Ek is one of the nearly 20,000 mass gravesites in Cambodia. Although now filled in and overgrown, these graves were originally open pits – as deep as 5 meters. 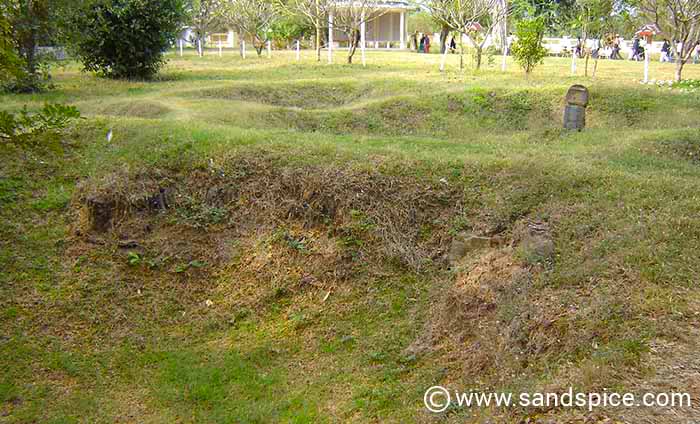 The rank and file Khmer Rouge were no more than children (the average age of the troops who entered Phnom Penh in 1975 was 17). Many of the executions at Cheung Ek were performed by these youths, as young as 12 to 18.

Children and babies were not spared the fate of their parents.

In the midst of the fields is an old oak tree. To save bullets, soldiers bashed the skulls of infants and small children against its huge trunk, before throwing them into the open pits. 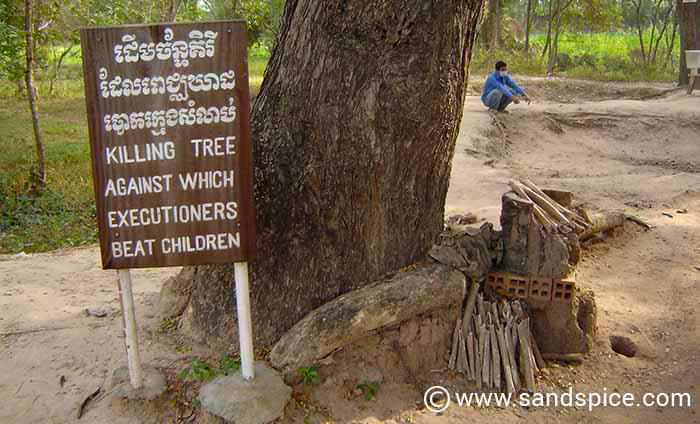 As we walked around this area, we became aware of half-buried objects – bones, teeth, and clothes that remain as testament to what happened here.

Other items were neatly piled up next to the tree. 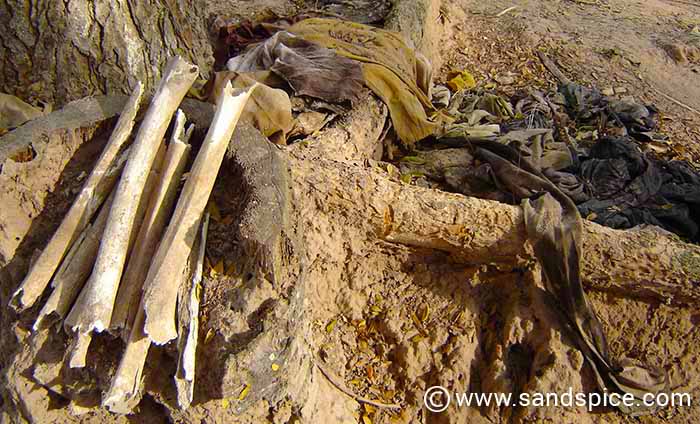 The centre piece of the Choeung Ek site is the Buddhist stupa memorial.

This small building contains the remains of roughly 8,000 victims. The skulls are arranged on the lower shelves, the other bones are stacked above.

Inside the Buddhist stupa memorial at Choeung Ek

The skulls are organized according to age and sex. These you can see above were young girls. Most of the victims were clubbed to death to save the bullets.

In the afternoon, we travelled 5 kms from Choeung Ek to Tuol Sleng and the location of the infamous S-21 interrogation center.

The morning visit had been harrowing enough, but S-21 reveals the massive scale of death and suffering that the ordinary people of Cambodia endured. 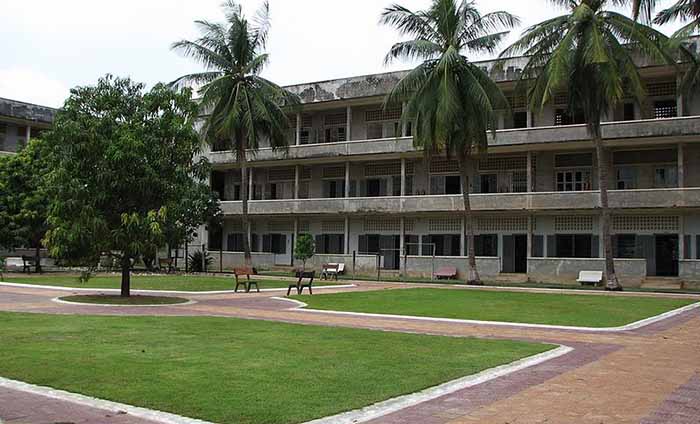 S-21 was a former high school complex, made up of a series of 3-storey buildings separated by large courtyards and open areas.

When we arrived we found a number of English-speaking guides offering their services. You can of course just wander around by yourself – there are a lot of posters and documents on display with explanations in English and French.

However, it is well worth taking a guide for a more in-depth explanation of everything that you are seeing. 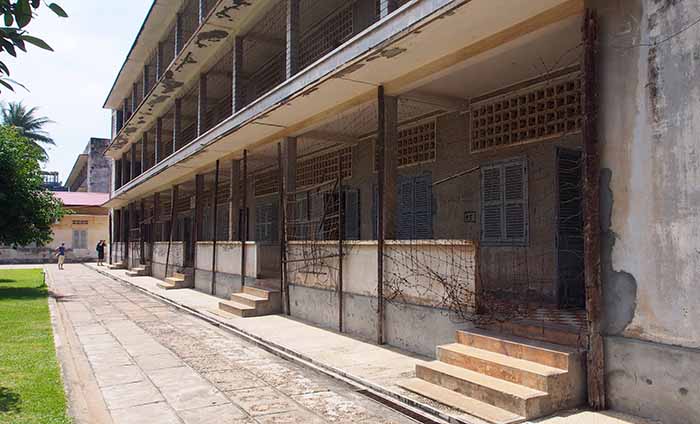 A number of the ground-floor rooms were used as cells for the prolonged interrogation and torture of selected individuals. The original steel beds to which they were chained are still there.

Other larger rooms were used to hold dozens of prisoners who were forced to lie on the floor shackled by the feet to a long iron bar. The prison guards routinely beat them with canes if they tried to speak.

Most prisoners were held like this for two to three months before execution. 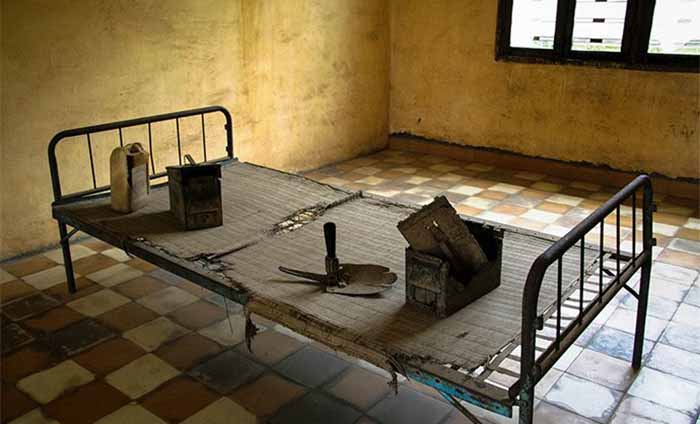 There are thousands of photographs of prisoners faces in the museum, representing a fraction of the estimated 20,000 people who died here.

We later learned that many of the guides at S-21 are former prison guards who worked there as teenagers. They were responsible for keeping the inmates chained up at night and maintaining discipline.

They have even made a video in which they re-enact their daily routines for the camera. This was likely a kind of therapy for dealing with the trauma of what happened in their youth.

You can purchase the video at a small shop to help support the staff and the museum, but it is grim viewing.

After a relatively short stay in Phnom Penh, we were heading off to the second-largest city of Cambodia – Siem Riep – to visit the largest religious monument in the world.

Before that though, we would be side-tracked into the countryside to experience one of Cambodia’s unofficial and less conventional tourist attractions.

If you enjoyed Phnom Penh, Cambodia, take a look at our other Tropical Travel Plans. You may also like: 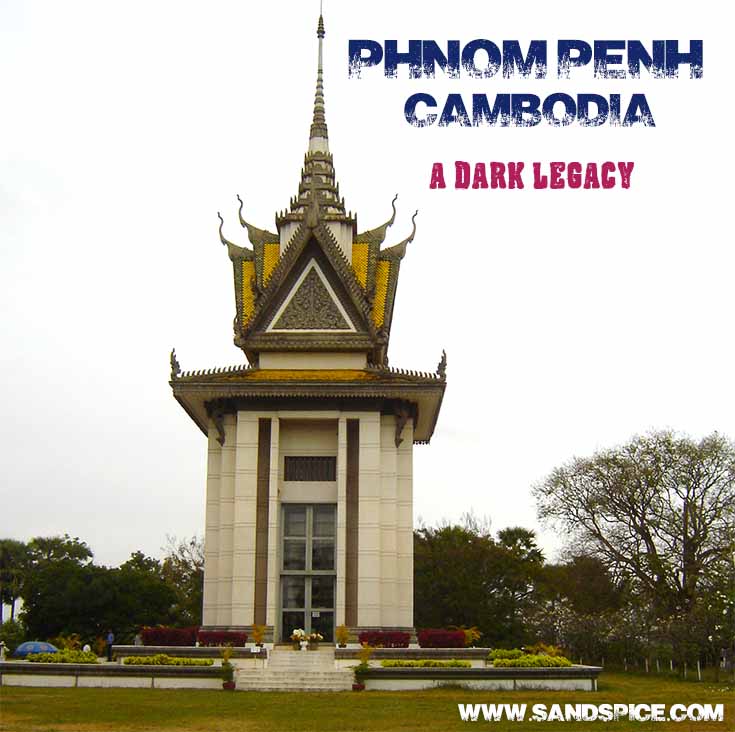 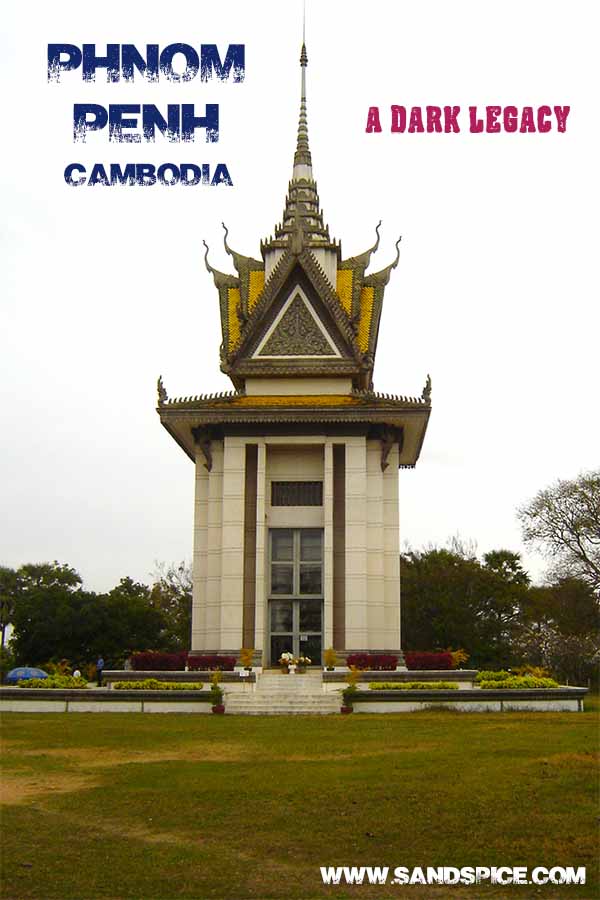