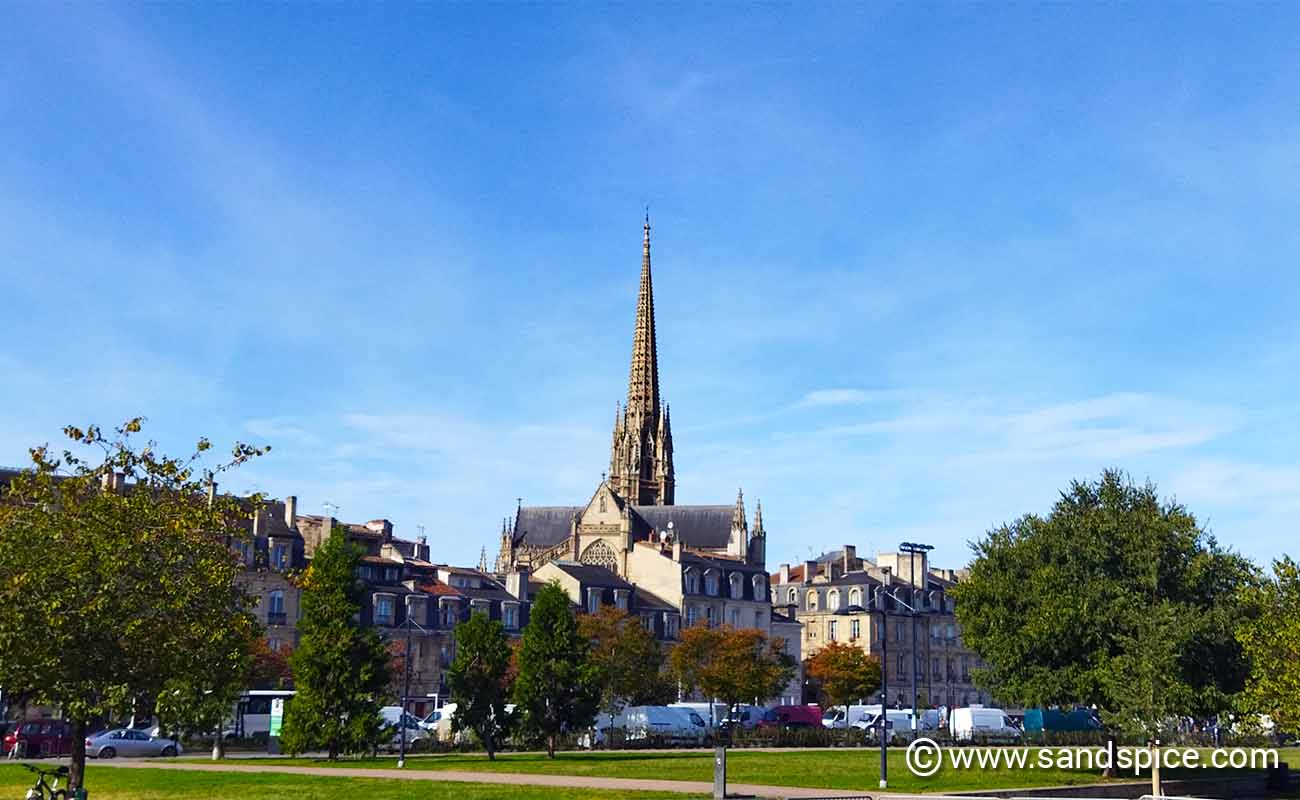 The advent of low-cost flights to Bordeaux from various European locations is the perfect excuse to make a short trip to this gastronomic region. We combined our trip with visits to Limoges and Saint-Léonard-de-Noblat for a one-week mini-tour of Bordeaux and some of its surrounding attractions. 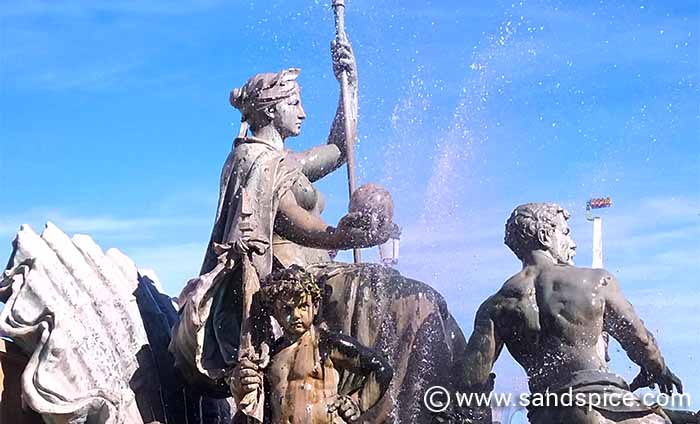 Getting in and out of Bordeaux from the Airport

From Bordeaux–Mérignac Airport, we ordered an Uber taxi, and paid €26 for our 25-minute trip to our hotel – the Hôtel Majestic on the Rue de Condé in central Bordeaux.

If you take one of the metered taxis waiting outside the terminal, you’re likely to pay €45 or more for the same trip.

There is a scheduled Airport Shuttle bus service that runs between the Airport and Gare Saint Jean (the city central train station). This service runs every 90 minutes or so, and charges €8 for a one-way trip. The bus is good value, but if you’re arriving in Bordeaux you’ll still have to get to your hotel from the train station (either by foot, taxi or tram).

In our case, we arrived on a Sunday evening after the last bus had left from the airport at 20:00, so a taxi was the only option.

When we left Bordeaux for the airport one week later, we took a tram from just outside our hotel (Quinconces). From there, it was just 20 minutes and 4 tram stops to Gare Saint Jean, and then a 30-minute trip on the Airport Shuttle to Bordeaux–Mérignac Airport. 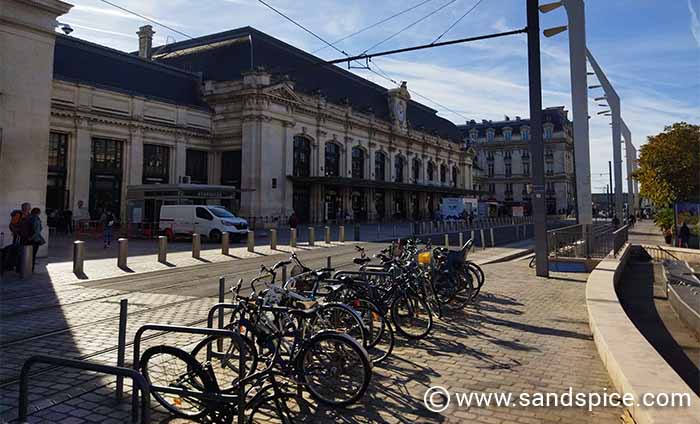 The 4-star Hôtel Majestic dates back to the 18th century, but has been suitably modernised, while retaining its charm. It has the classic French central stairwell with a small 4-person lift at the centre.

The rooms themselves are much smaller than they appear in the promotional photos, but include all the necessities of this level of hotel, even including a (single) bathrobe. 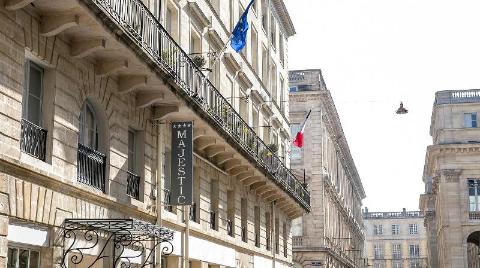 Due no doubt to its age the hotel rooms are badly insulated. We heard noise and movement from our neighbours, both above and to the sides. There is a student college and lodgings just across the street, and this can be noisy during the night at weekends.

The hotel is very centrally located, and just 100 meters from Quinconces tram stop. 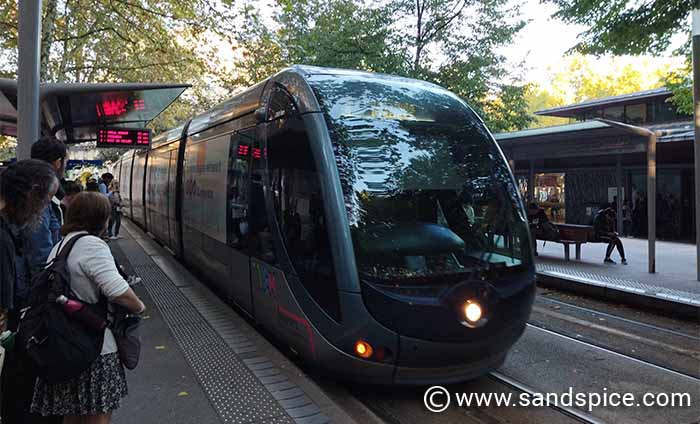 We paid €303 for a 2-night stay, excluding breakfast. If you want breakfast, it will cost an extra €15 per person – a bit steep for the fairly simple buffet on offer.

There are plenty of cafes in the area that offer breakfasts for less than half this price. However, they don’t open early, so if you have an early check out (before 9 am) you’re only option is the hotel breakfast.

We took our breakfasts at the nearby Kuro Expresso Bar. We paid €12 for a couple of cappuccinos with sweet patisseries.

Breakfast at the Kuro Expresso Bar

Picnic in the Park

Each day, tourists will queue for an hour to get a cheap lunch at L’Entrecôte restaurant, just adjacent to the Opera. We preferred to pick up some wine and crusty fresh sandwiches from the Patisserie, and take them to the park for a midday picnic.

The Jardins Publiques are just a short walk from the centre, and make the perfect place for a lunchtime break.

The 1.2 kilometer long Rue St Catherine is the longest shopping street in Europe. Running from the Opéra National de Bordeaux at the northern end, this street offers all the classic French stores (Galeries Lafayette, Fnac, Carrefour, etc.) that you could want.

The poshest shops are at the northern end, gradually giving way to the cheaper places at the southern end. Just shopping this street alone provides a good half-days activity.

We’d had enough shopping by the time we reached the Porte d’Aquitaine. 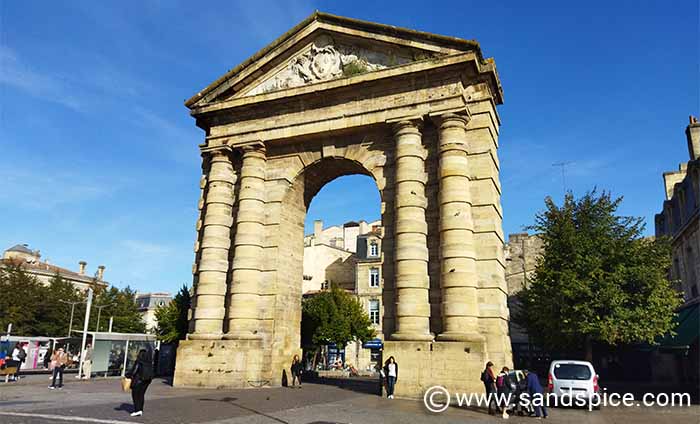 To burn off some of the calories from all the delicious French food and wine we were enjoying, we took a 2-hour stroll along the promenade, which runs for several kilometers along the Garonne river. 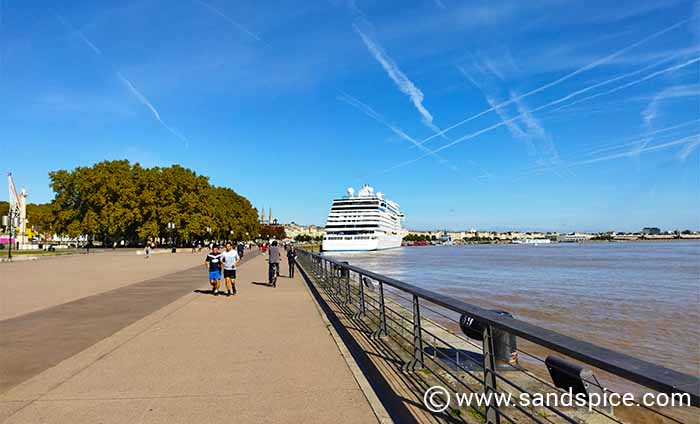 The promenade is wide and well-serviced with play/sports areas, cycle paths, toilets, and even a flea market.

You can take boat rides (including wine-tasting), and even start a trans-atlantic cruise from here. 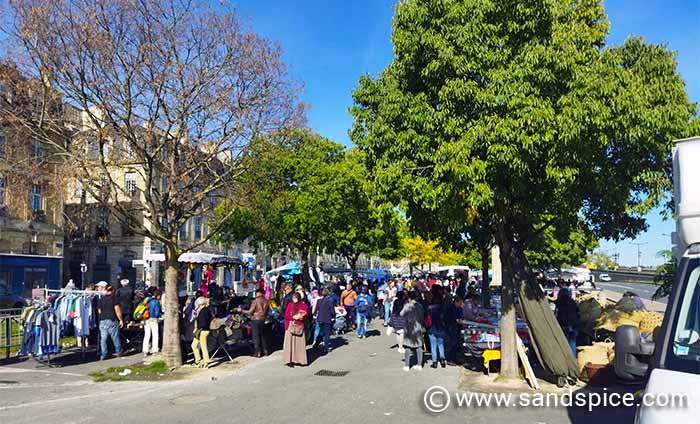 One of the most popular activities in Bordeaux unsurprisingly is the wine tasting. There are many venues on offer that you can’t miss as you walk around the center of the city.  For around €20 per person you get to taste 3 or 4 wines accompanied by small snacks to clean the palette, and some explanation about the wines from the sommelier.

As with the more popular restaurants in Bordeaux, these set-time tasting sessions are popular so be prepared to queue! 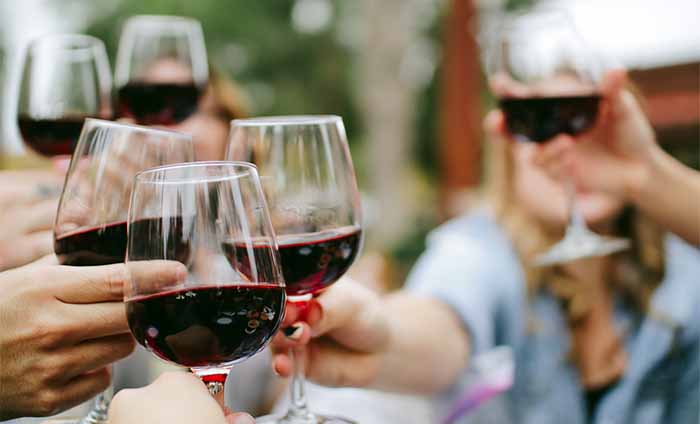 Wine Tasting!  You should be doing a lot of this in Bordeaux

Eating Out in Central Bordeaux

We had only one evening in Bordeaux and had originally booked the popular and centrally located Brasserie Le Noailles for an evening meal. However, we cancelled it after discovering some questionable reviews and inflated prices.

They advertise themselves as a mid-priced restaurant with an average price of €45 per person. If you read the small print you’ll discover this price is based on 1 aperitif, 1 starter, 1 desert, and no other drinks. Their main dishes cost in the €30-40 range.

We calculated an average meal for 2 with starters, mains, a bottle of wine and water would come to around €140. A bit steep for a Brasserie (with reportedly condescending staff).

Instead, we chose a really tasty meal at the Brasserie l’Orleans.

Here, we ordered pre-dinner glasses of beer and wine, followed by a Camembert Roti starter (with garlic and bacon) to share. For mains we had Onglet de Boeuf saignant (steak fries with salad) and Foie de Veau (veal liver) in a mushroom sauce with potato mash and salad. All washed down with a bottle of N29 Quai de Chartrons 2016 (a tailor-made Bordeaux Supérieur) and a bottle of sparkling water.

If you need to spend some time near Saint Jean train station before your train departs Bordeaux, you’ll find that Le Potager brasserie isn’t a bad choice. It’s located right in front of the main station, and offers reasonably-priced meals.

We ordered steak and pork mains with a half-bottle of wine for €46. The food was OK, and they ask if you’re in a hurry in case you don’t have much time. We had plenty of time but were still served very promptly. 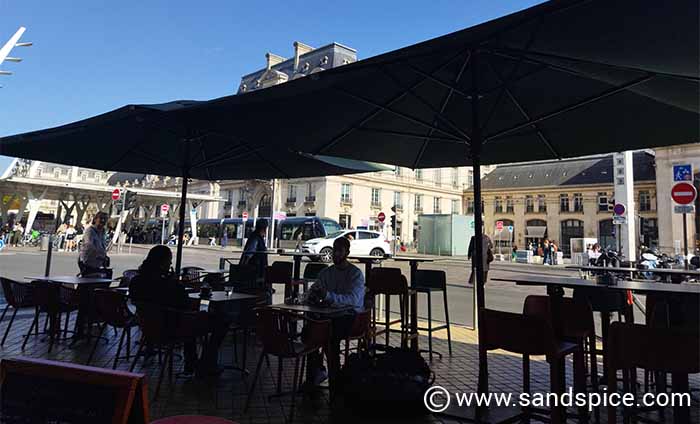 Following our 2-night stay in Bordeaux, we were next heading off to Limoges by train. We planned to stay there for just one night, followed by a 4-night Chateaux stay in the nearby town of Saint-Léonard-de-Noblat.

If you enjoyed Bordeaux Break 🍷 Sublime French Gastronomy, take a look at our other Shorts Breaks and City Stops. You may also like: 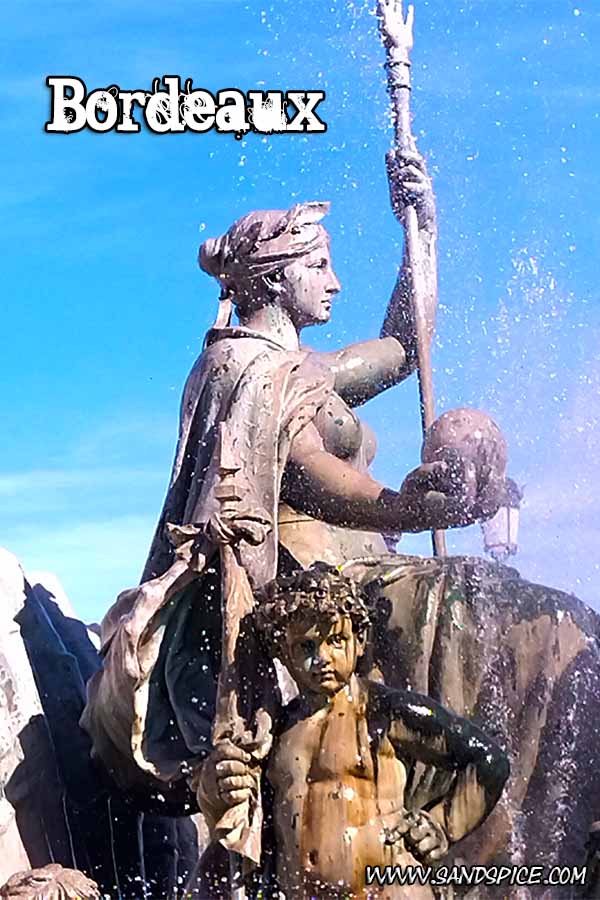 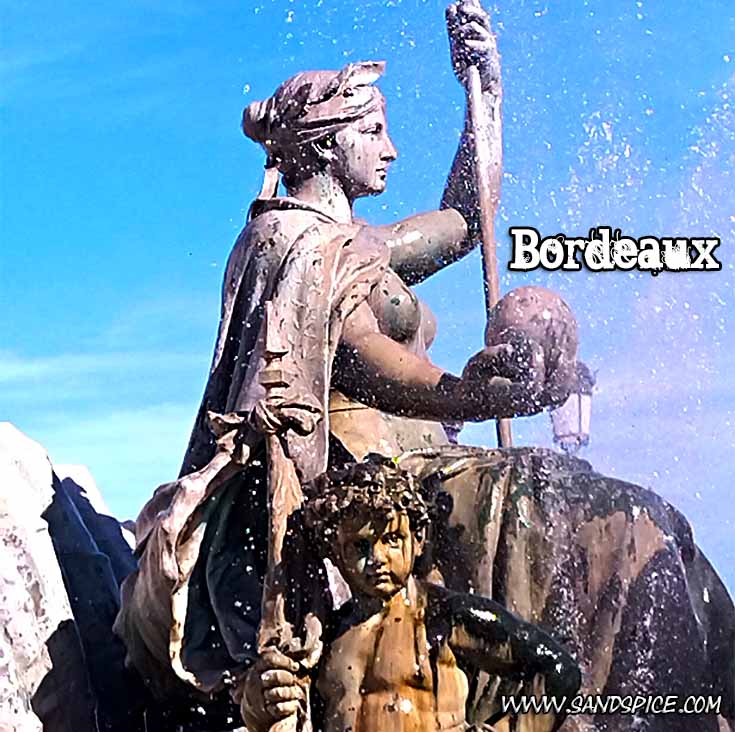