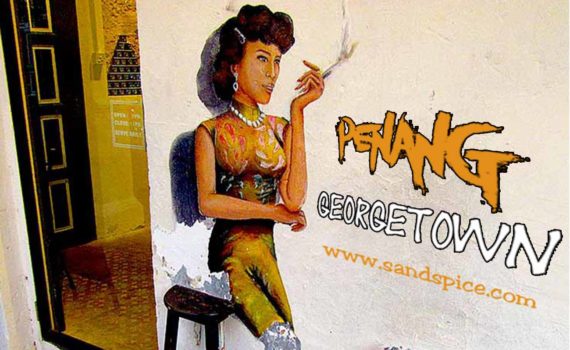 Following our island hops through Phuket and Langkawi, we planned to spend 7 days on the southernmost island in our itinerary – based in Georgetown Penang.

Although it is an island, Penang is connected to the Malaysian mainland via a very long and narrow 13.5-kilometer bridge. We would travel across this bridge a week later on our way to Melaka. For the time being, we were arriving by boat from Langkawi and were curious to discover what Penang had to offer. 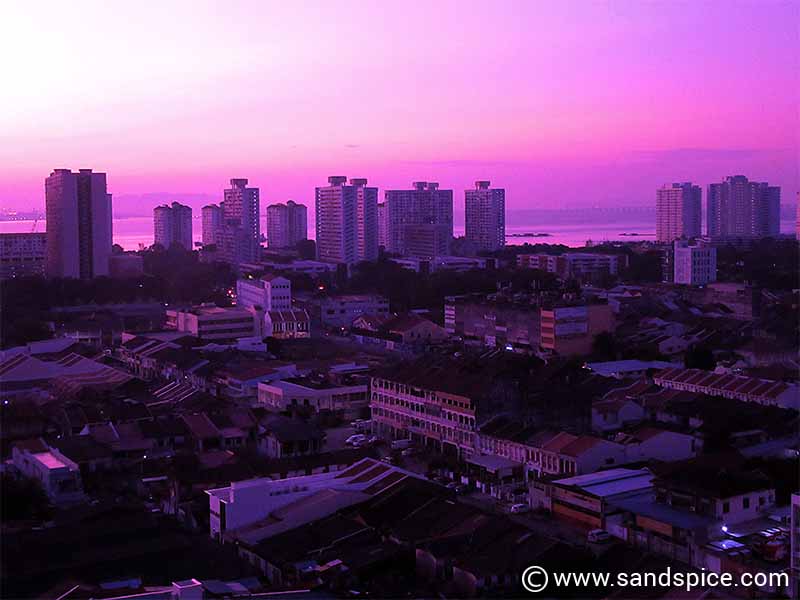 Getting around on foot?

We were staying in the capital – Georgetown – at the the Neo+ Hotel, but our first challenge was to get there.

Penang is pedestrian-unfriendly. Georgetown in particular is a nightmare to wander around on foot. If the lethal car drivers and bikers don’t run you down, you’ll be tripping over broken pavements or into open septic ditches.

If you value your health you’ll spend much of your time in Penang waiting for the green light at pedestrian crossings (and you’ll wait a LONG time).

Don’t expect drivers to give way to pedestrians. That isn’t the mindset in Penang.

Getting around using buses and ‘Grab’

A safer option is to take a bus or hail a ‘Grab’. You’ll still spend a lot of time sitting in the heavy traffic, but at least you won’t be risking your life. You’ll probably want to head around the north coast where the sandy beaches are, as well as the expensive condominiums and startlingly high tower blocks.

Although a multi-cultural city, Penang’s ethnic mix is massively dominated by the Chinese. This is hardly surprising considering the amount of construction visible everywhere – with inflated apartment prices that can only be aimed at foreigners.

Chinese New Year is therefore the biggest event in the calendar year. In fact, Penang prides itself on having the largest Chinese New Year celebration in Southeast Asia. This is a fortnight-long cycle of celebrations – a bit like Christmas Chinese-style – with canned musak gaily playing away in every retail establishment. 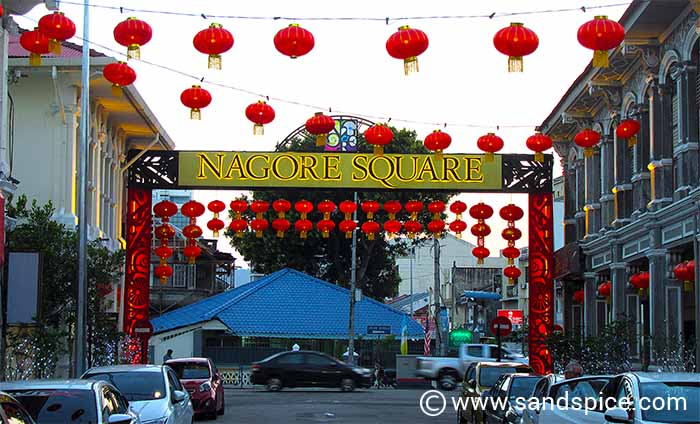 Due to the large percentage of foreigners living in Penang, there are a good number of shops and supermarkets that cater to foreign tastes. There’s even a Tesco’s … but don’t get too excited just yet.

This is like no Tesco’s we’ve visited in Europe. Many of the brands were unrecognizable to us. Other than a few very basic international Tesco offerings there was little of interest, and we left with an empty shopping cart.

We found it best to stick with the local food, of which there is a huge diversity ranging from Malay to Indian, Thai, Japanese and Chinese.

The centrally-located Prangin Mall quickly became one of our favourite shopping venues. The supermarket also has a good-sized non-Halal section. It’s just a pity this isn’t all duty-free – like Langkawi. 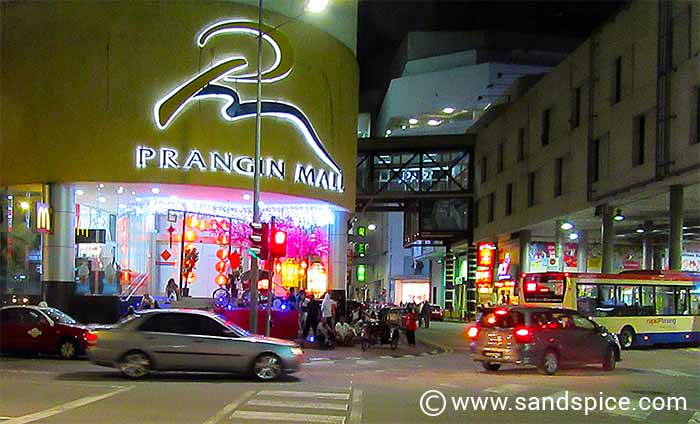 The Prangin Mall – in central Georgetown

Eating Out in Georgetown Penang

Everyone raves about the food in Penang, but here we encountered some of our most dubious eating experiences in Malaysia.

Not that it was bad, just that it was highly forgettable (or memorable for the wrong reasons). The local soups were OK, but nowhere near as good as equivalent soups in Hong Kong. 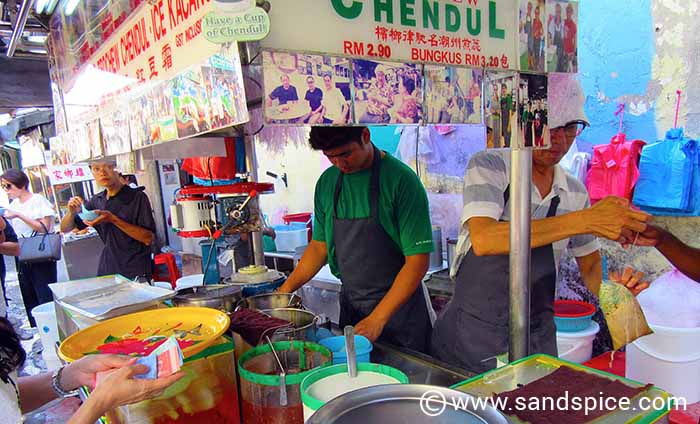 Streetfood in Georgetown – This is where it’s happening

Many foods are artificially sweetened to please local palettes – a case in point being the ubiquitous laksa. The street food is predominantly deep fried (and sweetened). All of the attractive and multi-colored ice-drinks are sickly sweet – we found it was better to stick to water.

You really must try the Chendul!

We were strongly recommended to try one of Penang’s absolutely favourite treats – Chendul (or ‘Cendol’) – from a specific stall in the center of Georgetown.

This is an iced sweet dessert made from a mixture of coconut milk and palm sugar syrup, with red beans and droplets of green rice flour jelly. There were also some other unidentifiable elements floating around in the mix.

For a foreigner, this is a dish which really messes with your expectations, and absolutely requires a sweet tooth. 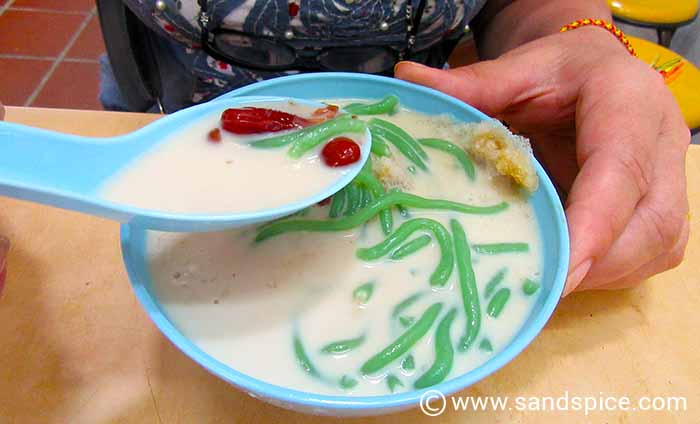 The What the Duck? restaurant  – 40, Nagore Road – comes highly recommended (if not cheap) and provides a welcome change from a local diet that’s high on fried chicken. When we visited (during a torrential downpour) we had the place almost to ourselves.

The place itself is a little clinical, and not too cozy.

We were a little underwhelmed with the duck, which was over-cooked and a bit dry.

The staff were very considerate when we left, giving us umbrella-coverage as we raced through the rain to the taxi (it was still pouring down).

If you’re more into snack bars than restaurants, then Mugshot on Chulia Street is the place to go. Catering more to the Western taste, they make great pastries, sandwiches and coffees and provide a chilled-out break from the sweltering streets. They also do great juices for around RM 13.

Georgetown ‘Heritage City’? …we just don’t get it

Although Georgetown boasts itself to be a Heritage city, many of the areas we visited on foot more closely resembled inner city Mumbai or Manila, albeit on a much smaller scale.

You can find old and dilapidated colonial buildings in these cities too, surrounded by the flotsam and jetsam of a chaotic and noisome street life.

Street art (up-market graffiti) is one of the vaunted attractions of the town. Much of this is quite good, and adds some color to an otherwise bland backdrop. You can also find this on a smaller scale in Kuah, Langkawi.

The locals – Some really nice people

We really liked the people we met in Penang. Very friendly, helpful and welcoming. The ethnic mix of Chinese, Malay, Indian and Western really makes for a cosmopolitan all-encompassing lifestyle, with a much faster pace than it’s sister island Langkawi.

We couldn’t leave Georgetown without purchasing some precious souvenirs, and Little India seemed to be the right place to do it. Here we found whole streets just dedicated to the sale (and purchase) of gold and precious stones.

We opted for two custom-made 22-carat gold rings. These were made from the bright yellow gold that is so popular with the Indians.

On the day of our purchase, gold was priced at Rm 163 per gram (€32.6). We chose very simple 4-gram and 6-gram gold rings. After selecting the ring types and having our fingers measured, we paid a deposit and were told our rings would be ready in 2 hours time. 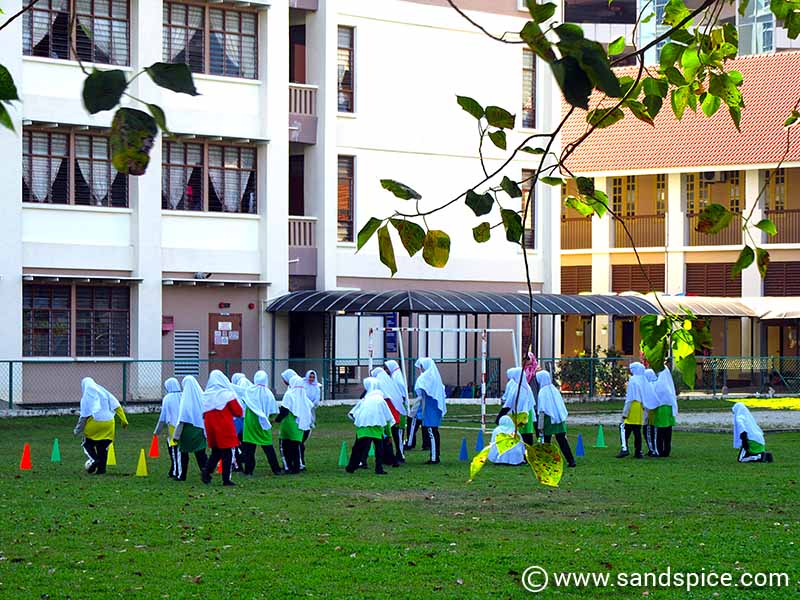 Moving on south down the Malay Peninsula

After just 7 nights in Penang, we were again on our way to the next destination.

We planned to take a bus across the Penang bridge and then south down the coast to Melaka (Malacca). We already had a hotel booked for 3 nights, after which we would head back up the coast to Port Dixon.

If you enjoyed Georgetown Penang, check out Malay Peninsula West Coast. You may also like: 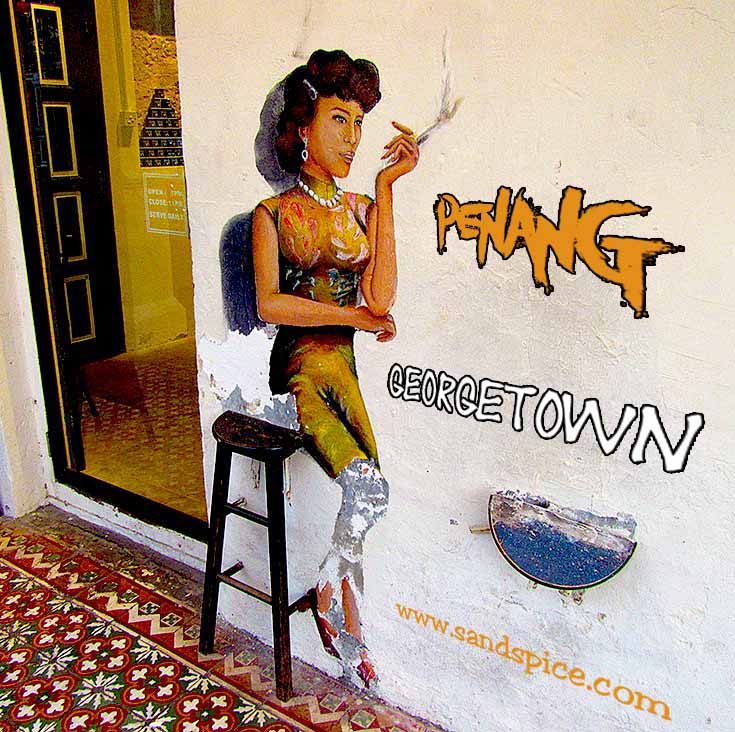 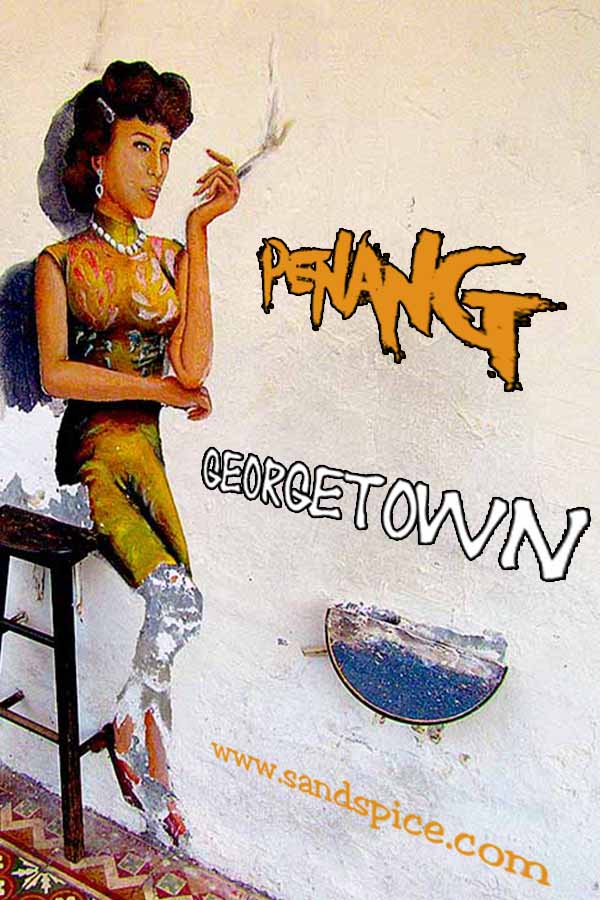