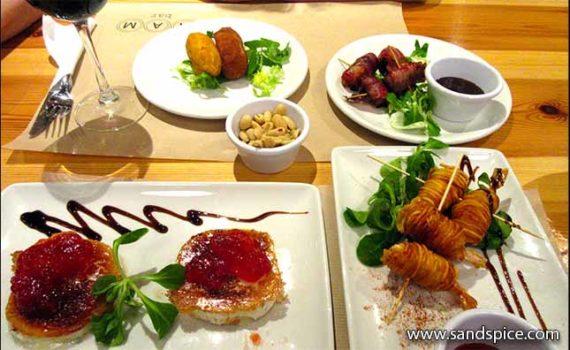 For our 4-day trip to Valencia, we selected in advance a number of interesting restaurants with good reviews. The only problem was these restaurants were dotted around the outskirts of the city and not particularly easy to get to. Our Valencia eating out plans therefore had to be revised to fit in easily with the locations of our planned activities. 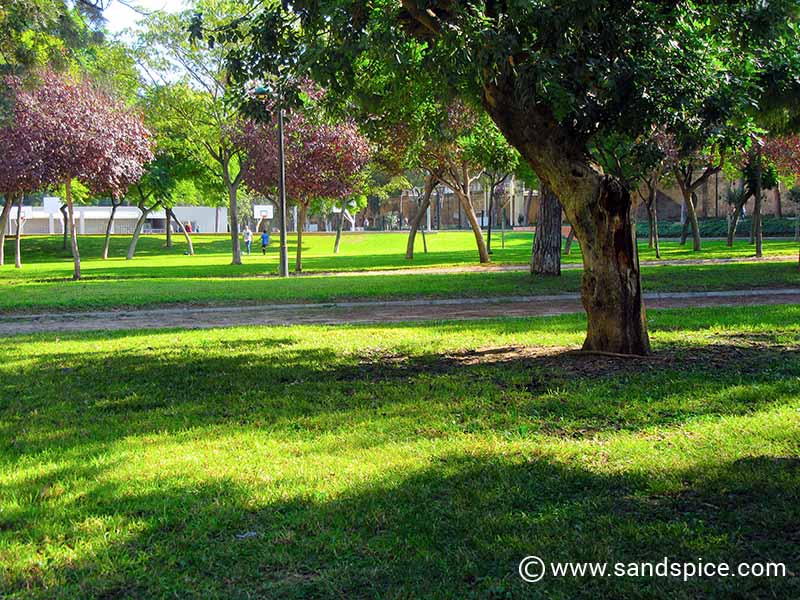 If you’re expecting to eat out in restaurants at ‘standard’ mealtimes, you’ll need to revise your plans in Valencia.

On our first evening, after much searching we could find only a couple of cafes and pubs serving tapas. Many restaurants only stay open until 4:00 in the afternoon, and the ones which open in the evening often don’t start business until 8:30 or 9:00 pm.

If you want to eat at a civilized hour – around 6:00 or 7:00 pm – you’ll end up eating an assortment of tapas at one of the many small cafes.

The ones we tried were actually quite good – notably the Kram Bar, adjacent to the Kram Hotel on Avda Campanar. 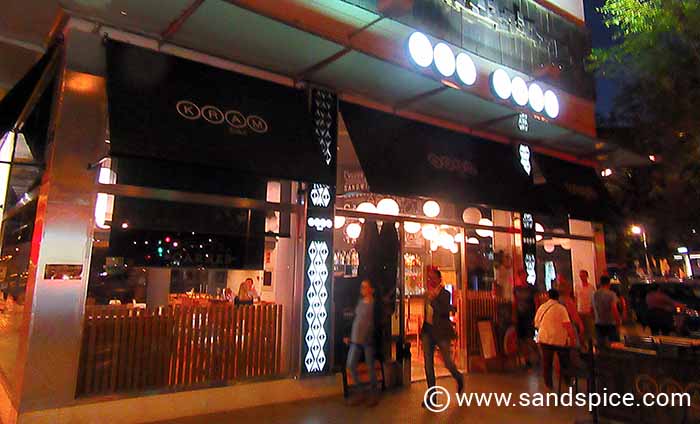 Valencia Eating Out – Tapas at the Kram Bar

Together with a couple of glasses of wine this cost just €29 for two.

We went well out of our way to find the Shahi Indian restaurant, which had good traveler reviews. The actual meal we had was OK, with pappadams, okra, meat samosas, paneer, roti, lamb chops and a spicy chicken madras.

Together with a bottle of wine our bill came to €49. 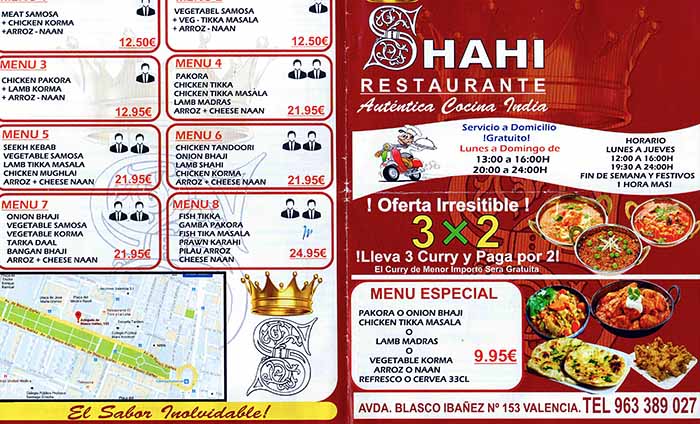 One of the culinary highlights of our trip to Valencia was a visit to the (in)famous Turangalila. Decorated in a capricious maximalist-style, the Turangalila is a late-night restaurant and show combined. Its theatrical decoration, Gothic furnishings, mythological figures, and exuberant ‘hostesses’ create an unforgettable atmosphere.

In line with Spanish traditions, the restaurant didn’t open until 9:30 pm, and we arrived shortly after 10 pm. We were extravagantly greeted by Lisa Dust, our host(ess), and led to our table in the colorful and kitsch salon. 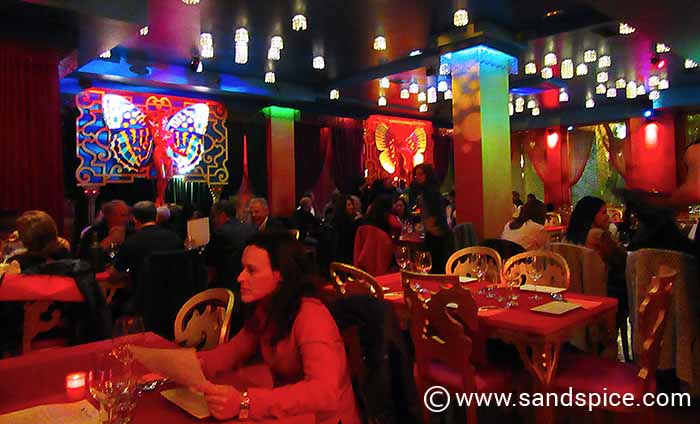 It felt like we’d entered the set of Liza Minelli’s Cabaret.

Our table was immaculately set, and 2 of our hostesses went to pains to explain the menu to us in English (we were the only foreigners in the place). It being Halloween, many of the other guests were sporting pointy hats and gruesome face paint. However, they couldn’t compete with the lavish makeup and costumes of our ‘lady’ hosts.

For starters we were offered a tasty selection of tapas to share, including pate, croquettes, cappaccio of meats and cheese and pasta. The main course was a choice of meat, fish and vegetarian, and there was a large choice of deserts.

All of the food was impeccably presented and very tasty. 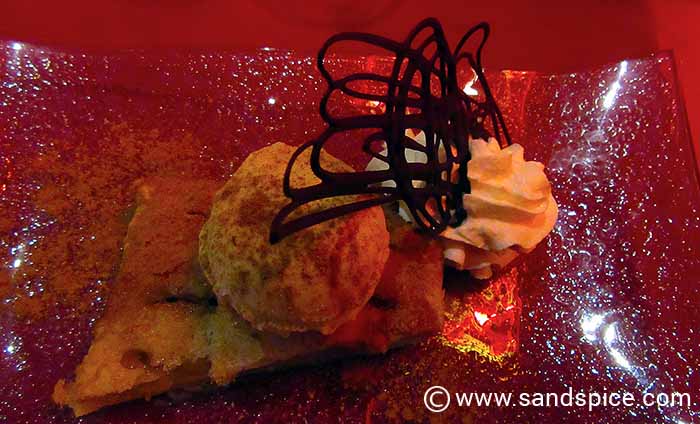 Valencia Eating Out – One of the deserts at Turangalila

To accompany our food we were offered complimentary drinks throughout the evening, as well as coffee and mixed cocktails during the show. As for the show itself, this started around a quarter past midnight after the dinner dishes had been cleared away.

The ‘girls’, who had so far been working hard serving food and drink, changed into their even more audacious cabaret gear for the nights entertainment.

The songs of course included such classics as ‘New York, New York’ and Shirley Bassey’s ‘I Am What I am’. The music interludes were punctuated by sections of stand-up comedy, most of which was lost on us.

The locals were in uproar, so if your Spanish is up to it, it must be hilarious. 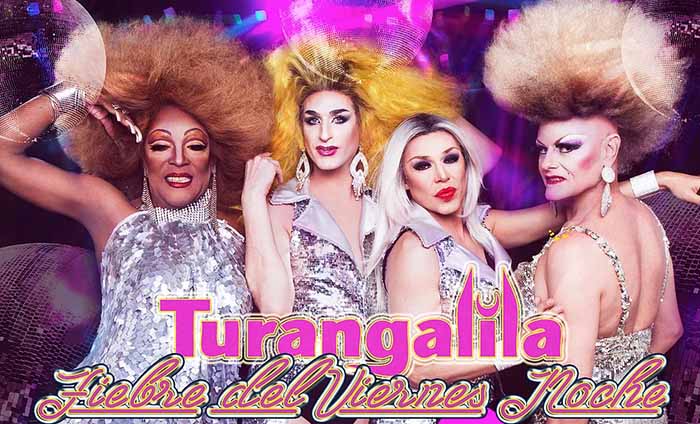 Valencia Eating Out – Turangalila hostesses: They’re not as scary as they look…

The fun ended at around 2:00 am with everyone getting up to dance to the salsa.

All in all an unbeatable evening of food, drink and entertainment – and all for just €35 per person.

Valencia Eating Out – Carrefour (no joke…)

If you’re self-catering in Valencia, don’t miss out on Carrefour. They have a few hypermarkets dotted around the city, and offer some good and inexpensive meal deals. Great for preparing a picnic in the park or the odd meal or breakfast back in the apartment.

We picked up a full Japanese meal there, including sushi, muchi and miso soups.

They also make delicious snacks from crispy baked bread loaded with tasty Iberico de Bellota Spanish hams and cheeses. Take these into the park with a half bottle of local wine and you’ll be set for the day. 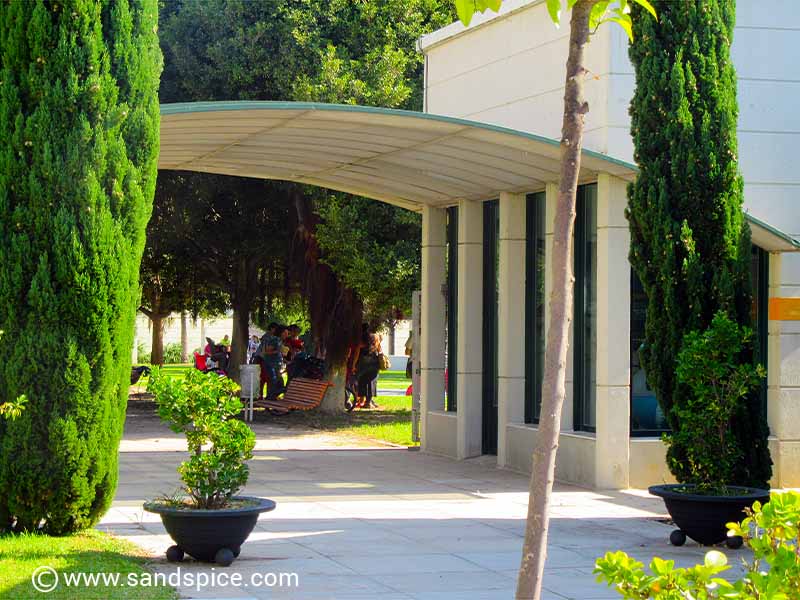 Valencia Eating Out – Picnics in the Park

As for activities, we were planning to visit the Museum of Illustration and Modernity, the City of Arts and Sciences, the Bioparc and the Oceanogràfic.

We wouldn’t have too much time for idling in the park, then…

If you enjoyed Valencia Eating Out, check out our Short Breaks and City Stops. You may also like: 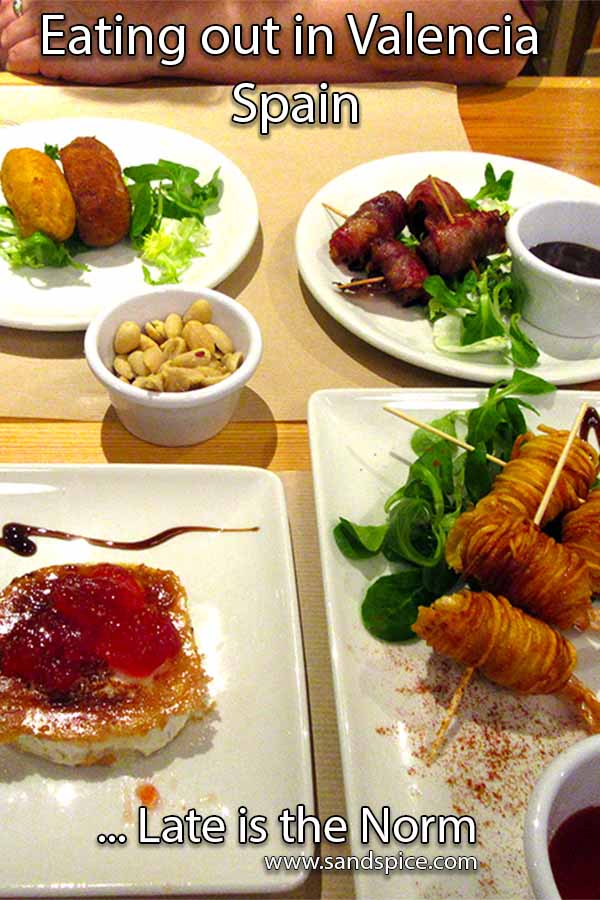 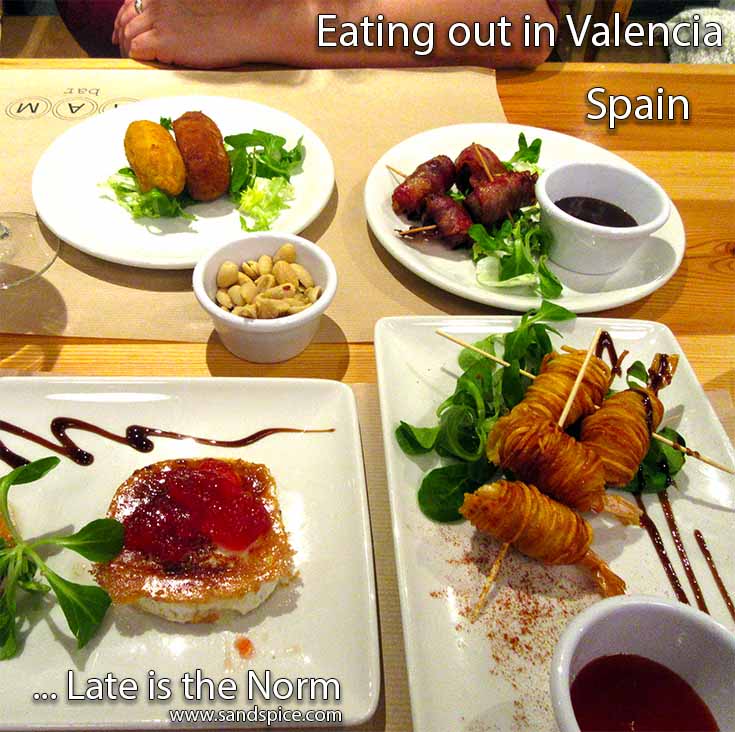