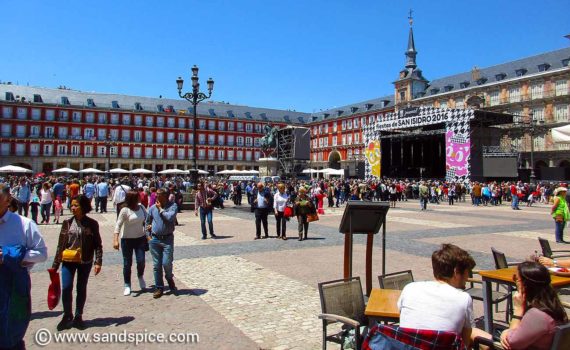 Our 9-day tour around the Canary Isles started and finished in Spain. We spent a few days at the beginning of the trip in Girona, and finished off with a few days in the capital – Madrid.  So – as the finale to our trip – we were keen to find out what there is to do, see and eat during a short 2-day Madrid budget break.

The Teleférico de Madrid allows you to view the city from a bird’s-eye view. Running between Parque Oeste in central Madrid to Casa de Campo, a return journey on the cable car covers 5 kilometers and costs €6 per adult.

We walked up the hill from the Royal Palace to the cable car entrance. However the queue was endless, and at just 6 people or less per cabin, the line hardly seemed to move for the 20 minutes or so that we waited.

In the end we gave up queuing and just walked around the parks instead. The Jardines de Sabatini are really nice and peaceful. 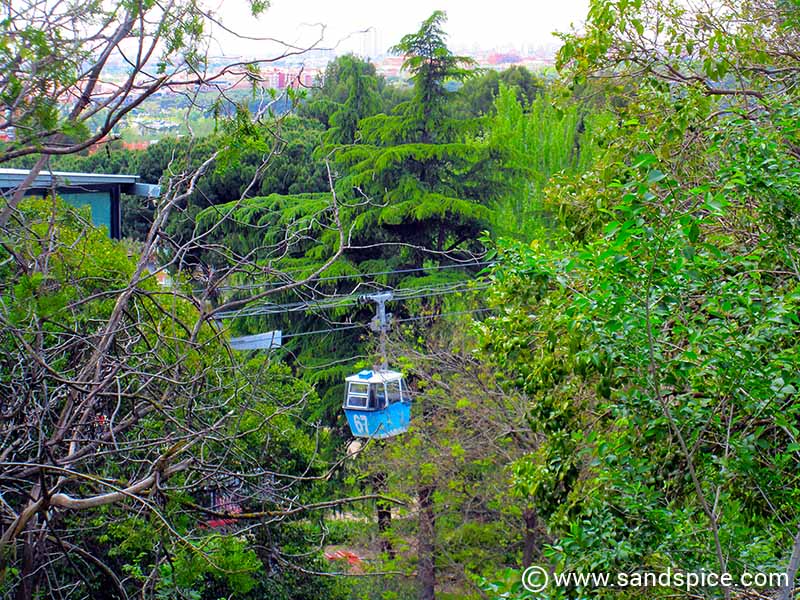 Madrid’s Golden Triangle of Art comprises the Thyssen-Bornemisza museum, the Prado Museum and the Reina Sofia National Galleries. If you love paintings, then these galleries will be among the highlights of your trip to Madrid.

Thyssen-Bornemisza is located close to the Prado so – if you can manage the cultural overload – it’s practical to visit both of these museums on the same day. 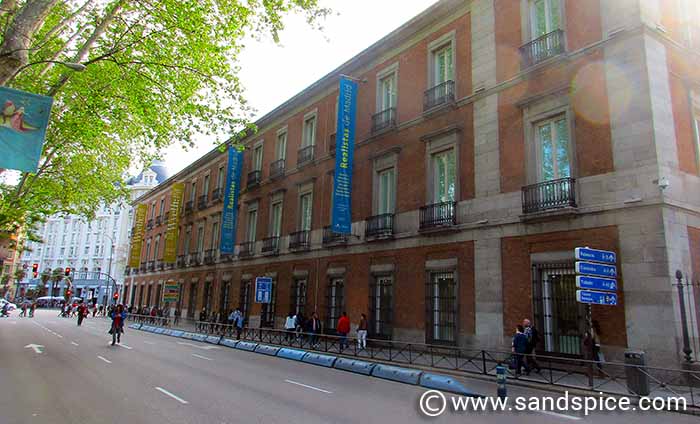 Converted from a palace to a museum, the Thyssen-Bornemisza houses a collection that spans eight centuries of European painting from leading Renaissance, Baroque and Rococo painters. There’s also a display of North American paintings from the 18th and 19th centuries.

Entrance to the Thyssen-Bornemisza costs €13. 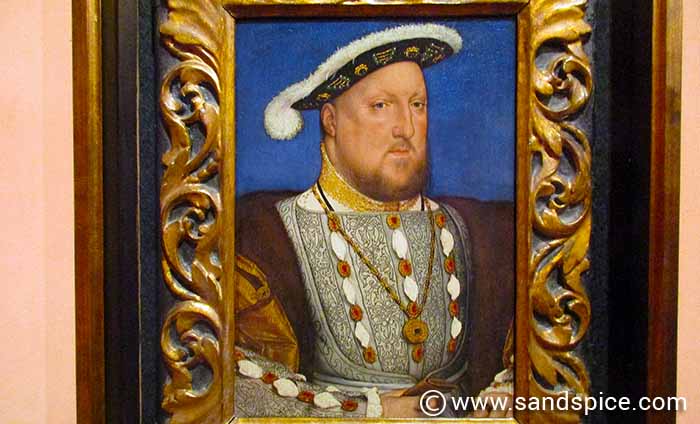 The Prado Museum holds a huge collection of paintings and sculptures. They are arranged in over 100 ‘salles‘ sprawling over 2 floors. The place is quite a maze, and it’s easy to get disoriented if you’re not using the audio guides. 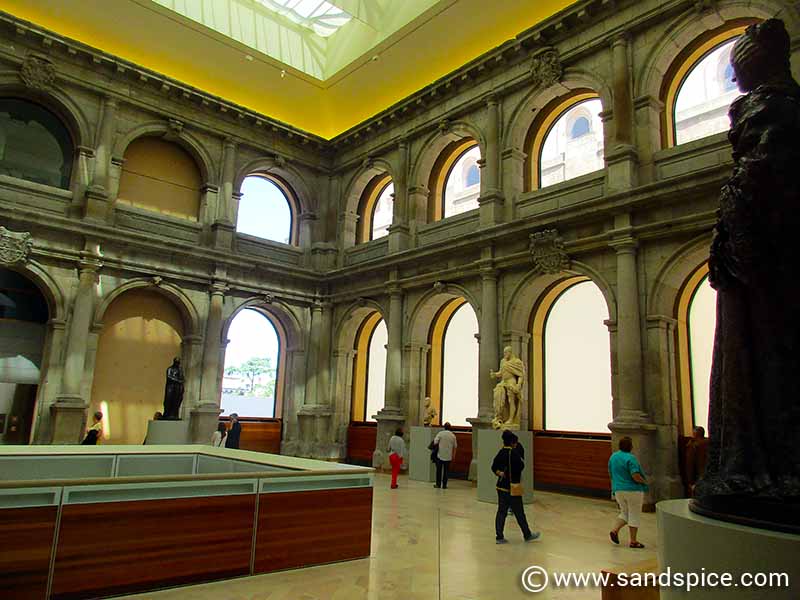 The Prado is home to the largest collection of paintings by Rubens, who churned out a staggering 1,500 paintings in his career. Many of these were sponsored by Henry IV of Spain. You can also find pieces by Van Dyke, John Sargent, Monet, Van Gogh, Lautrec, Titian and many others.

Entrance to the Prado costs €14. There can be big queues so its a good idea to be there when they open at 10 am.

The Reina Sofia National Galleries house impressionists, expressionists, and European and American paintings from the 20th century. Unfortunately, we couldn’t include it on this trip.

If you’re looking for some traditional Spanish entertainment – and you’re in Madrid at the right time of year – you can always visit one of the bull fights.

The bull-fighting season runs from mid-May to October. During this period, bull fights are scheduled every Sunday at 7 pm. 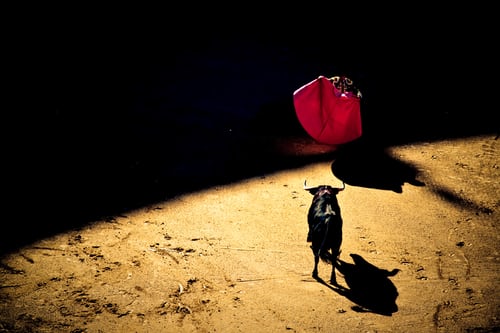 “Who IS that lady in the glittery spandex?”

You can buy tickets at the bullring on the Friday or Saturday before the event. The bullring is located on the Plaza de Toros Las Ventas on Calle Arenal (Ventas stop on the metro).

We found quite a buzz of people around the open square leading to the entrance of the Royal Palace. Again, you can expect to join a long queue to get into the Palace. Once inside, you’ll need around 45 minutes to visit the place and can expect to pay €10 to €14 for a ticket.

Taking all into account, this will use up the best part of a morning or early afternoon. Since we only had 2 days in Madrid we had other (more interesting) priorities: The Royal Palace will have to wait for another (less busy) time. 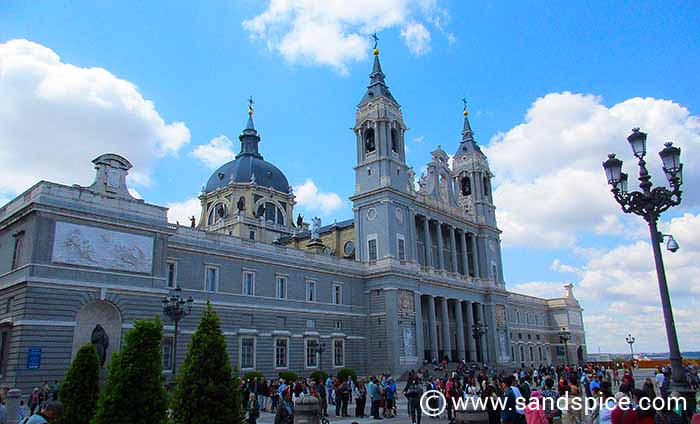 The Royal Palace – Nice enough just to admire from a distance.

Eating out in Madrid was mostly a disappointment. This is a city crammed with tourists looking for cheap eating options. As a result, there are countless eateries offering seemingly good value for money, but serving bland or inferior food.

Often you can be tempted into a restaurant with advertised promises of wine and tapas for a few euros, to find these deals are available only if you are prepared to eat at a cramped and busy bar.

Everywhere there is a frenetic energy and haste which makes the chance of getting a calm and relaxing meal impossible.

Throughout the city, there is also a plethora of ‘eat-as-much-as-you-want’ joints, typically for around €10. One of the best places we found was the calm oasis of an Indian restaurant called Indian Aroma, a little off the beaten track. 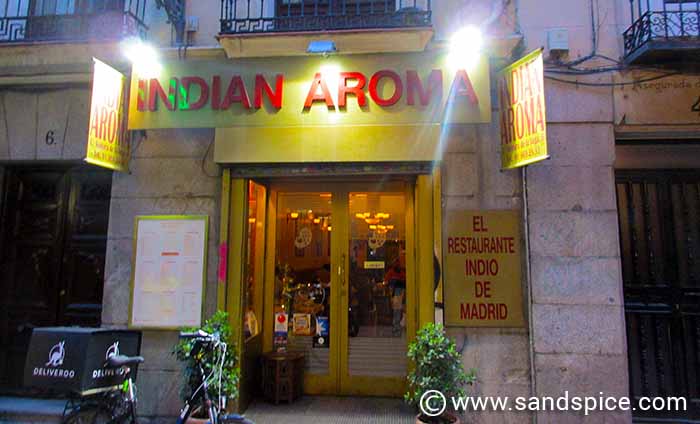 Located in the heart of Madrid, close to Plaza Mayor, San Miguel  is a covered market filled with a variety of freshly prepared tapas, hams, olives, and other foods and drinks. 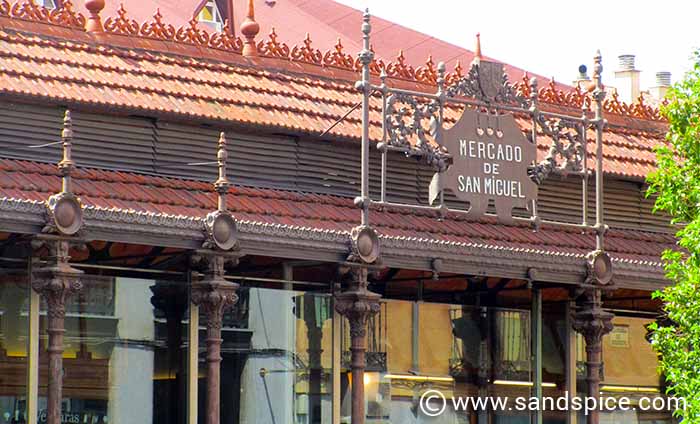 It’s a great place to catch your lunch on the move. A really handy oasis amid the vibrant attractions of the city center. 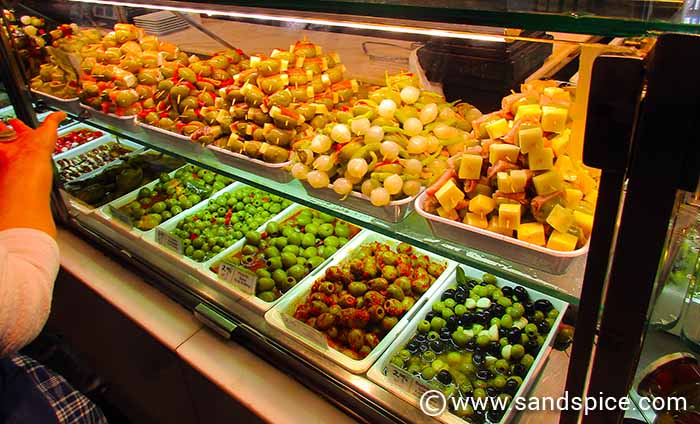 Founded in 1725, Sobrino de Botin is reputedly the oldest restaurant in the world (according to the Guinness Book of Records). As you would expect then, the place is packed with tourists and if you hope to get a table you’ll need to wait/fight for it. You’ll also end up paying through the nose for the privilege of eating some very ordinary food.

You won’t find many locals here, which is a telling indicator. Note also that (in line with Spanish tradition) the restaurant is closed between 4 pm and 8 pm. 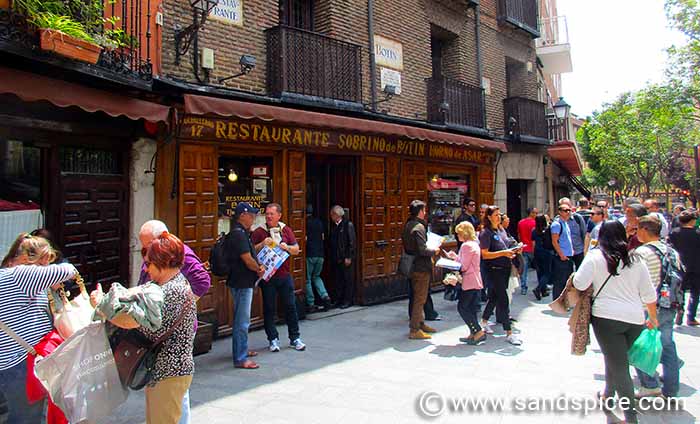 If you’re after an evening of Flamenco, there are several options to choose from. They all offer similar itineraries and costs. 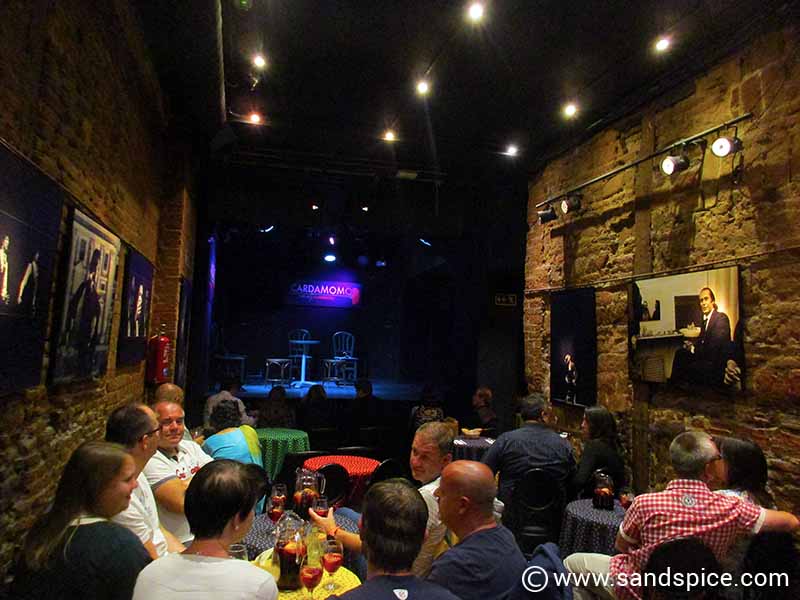 We were on the front row of these elevated seats, with a good view.

On the small stage, the performers present a series of dances and melodies. We watched 4 dancers, accompanied by 2 guitarists and 2 singers. There was a lot of attitude, plenty of ‘Ole’s and some serious stamping – I wouldn’t want these guys living above my flat. 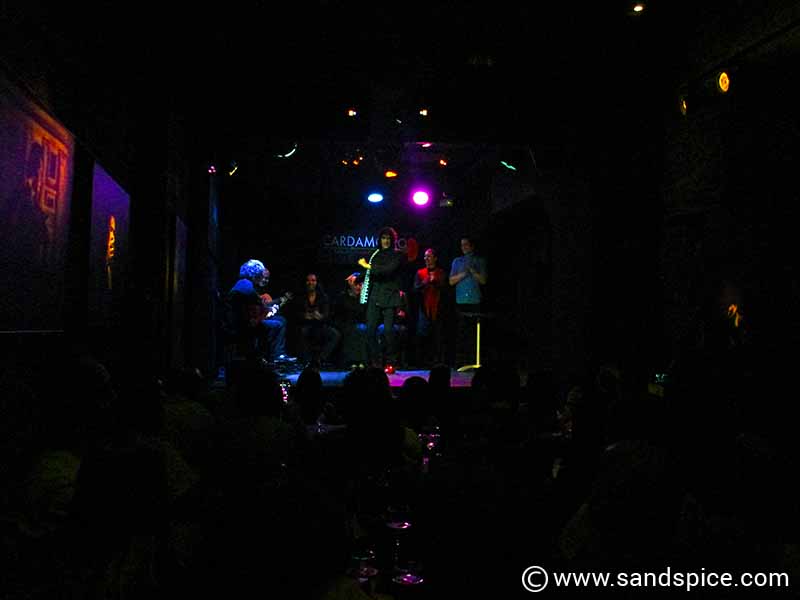 The artists seemed to be enjoying themselves more than the audience.

The whole experience felt like dropping into the back room of some keyed-up people who are having an impromptu knees-up. At times the singing and dancing was frenetic. We got our first drink, but not our second.

Was it worth it?

Well, it was OK for half an hour. A week earlier in Tenerife we’d visited a restaurant  – the Bodegar Julian – where our hosts entertained us with live music and song. There the entire (and excellent) dining bill came to half what we were paying to watch this flamenco act.

So no, the Cardamomo wasn’t worth our time or the price we paid.

Madrid – A city with something for everyone…

Despite the ubiquitous queuing we really enjoyed our short break in Madrid. As with other Spanish cities such as Valencia, Barcelona or Girona, Madrid is synonymous with energy and culture, making it an attractive and popular destination for the young and old alike.

If you enjoyed our Madrid Budget Break, check out some other Short Breaks & City Stops. You may also like: 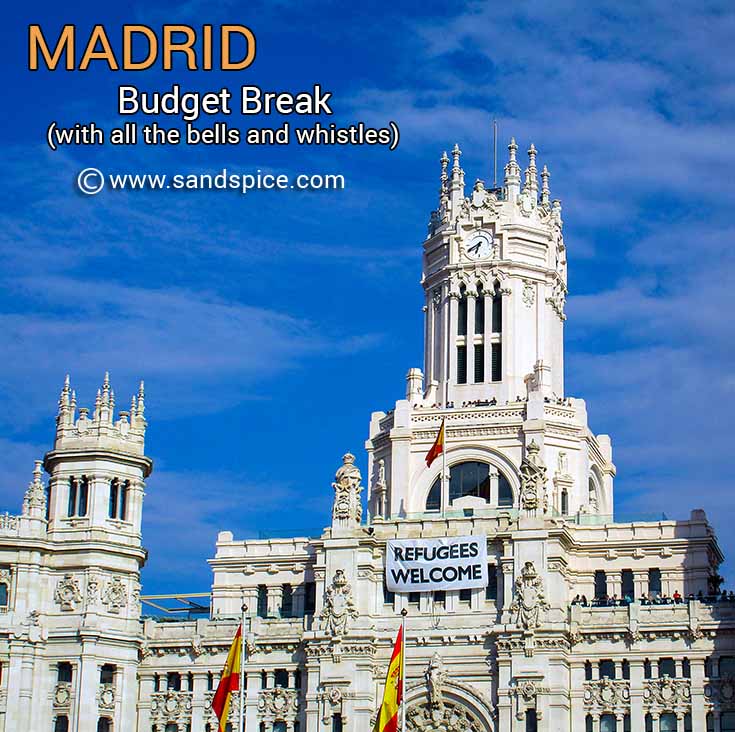 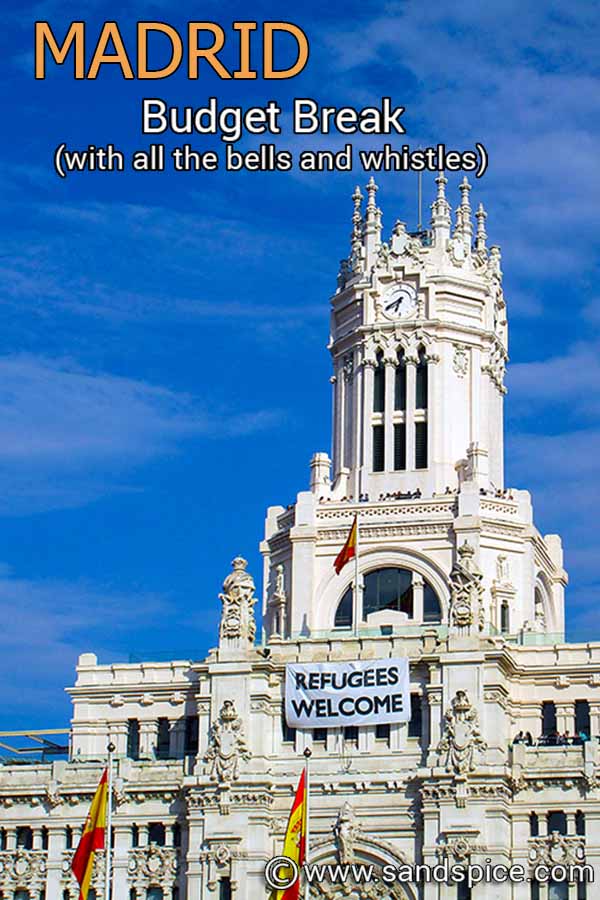