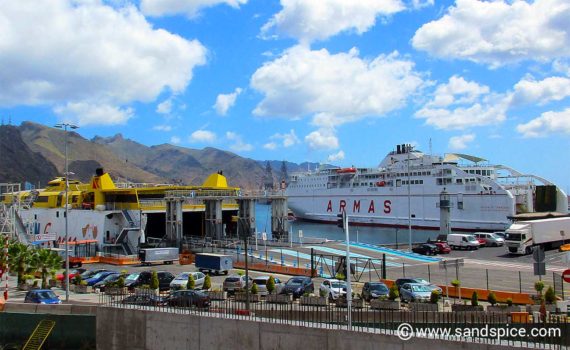 Considering the close proximity of Gran Canaria to Tenerife – if you have the time – it can be worthwhile including a visit across to see how the other half live. You can either fly over or take the ferry. In our case, we planned to take the Gran Canaria ferry from the port of Santa Cruz in North Tenerife.

The standard economy flight ticket is around €75 but you can sometimes get tickets for half this price – so its worth checking out.

We opted to take a ferry with the Fred Olsen company – somewhat cheaper at €47. We bought our ferry tickets the day before departure from a small travel agent in Puerto de la Cruz, not far from the El Tope hotel where we were staying. 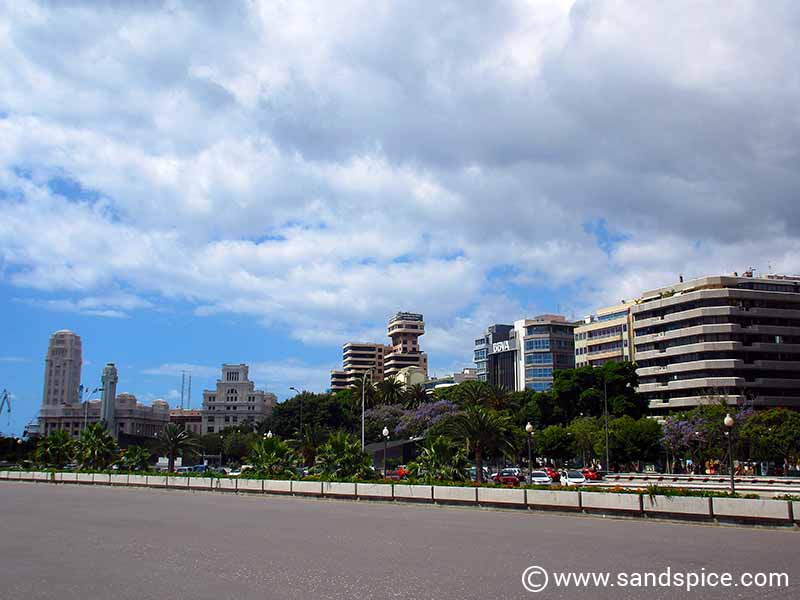 Gran Canaria Ferry – Getting there from Puerto de la Cruz

Our journey started in Puerto de la Cruz. We took the number 103 bus from the central bus station at 10:30 am. These buses travel directly to the main bus station in Santa Cruz without stops (€5.25 per person). The journey takes around half an hour.

From Santa Cruz bus station its a 20 minutes walk to the ferries. Fred Olsen Ferries run several times per day from Santa Cruz to Agaete on the north-west coast of Gran Canaria. The one-way individual passenger ticket costs €47 and includes a complimentary bus service from Agaete to Las Palmas over on the north-east coast. 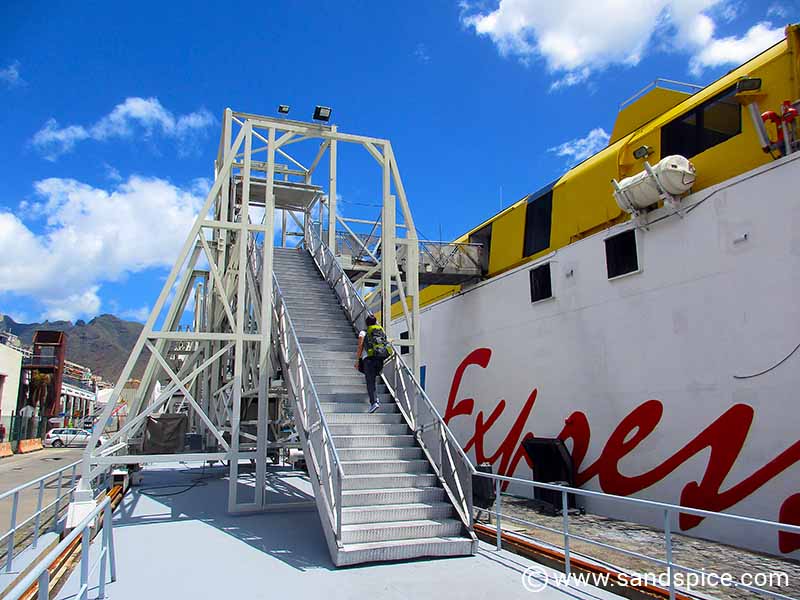 Onboard the ferry all the facilities are spacious, modern and comfortable. There’s a Snack bar if you need it, although the journey from Purto de la Cruz to Agaete in Gran Canaria takes just around one hour. 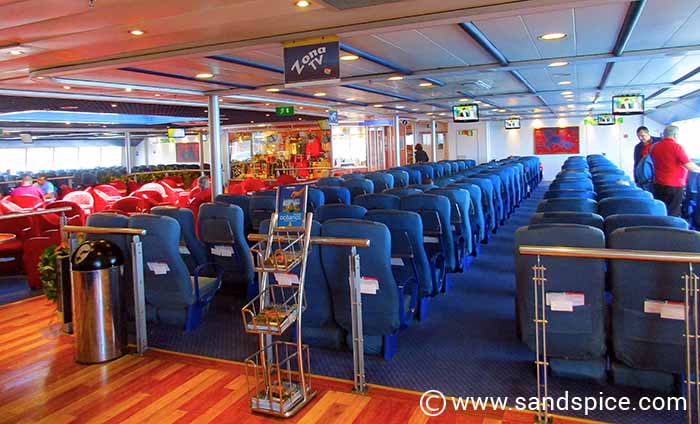 Onboard the Gran Canaria ferry

The buses are waiting for you when the ferry arrives at Agaete. From here, the bus takes 30 minutes or so to get to Las Palmas.

Ferry operators  There are other ferry operators who travel direct to Las Palmas for less than Fred Olsen – around €38. However these services are much slower, taking 2½ hours instead of 1 hour. 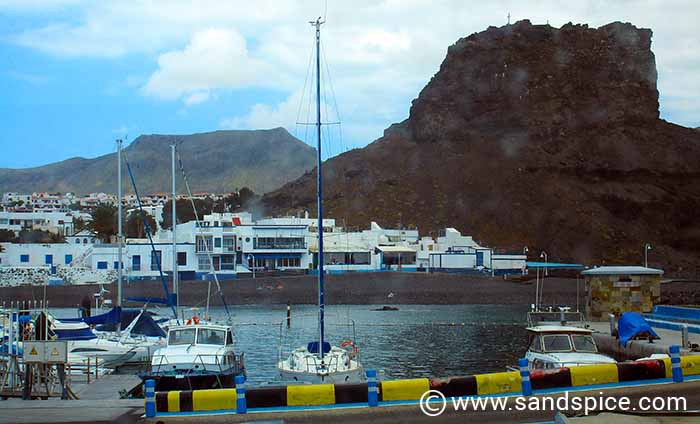 This is located underground beneath a huge white sail. 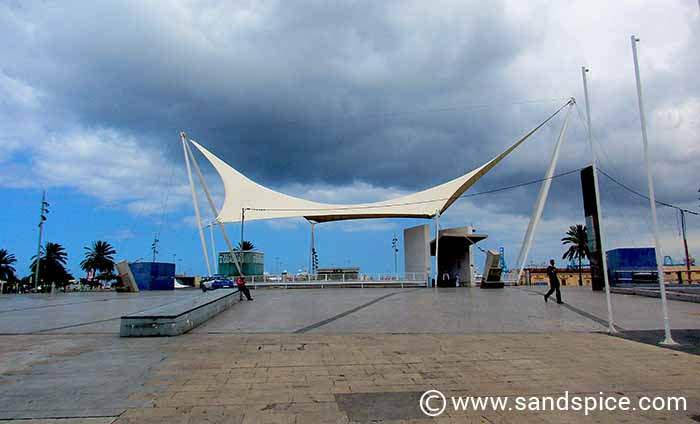 The journey down to Maspalomas takes around an hour. The bus makes several stops in Maspalomas before reaching its terminus at the lighthouse – El faro Maspalomas.

Depending on where you are staying, you might save yourself some walking by getting off at an earlier stop. 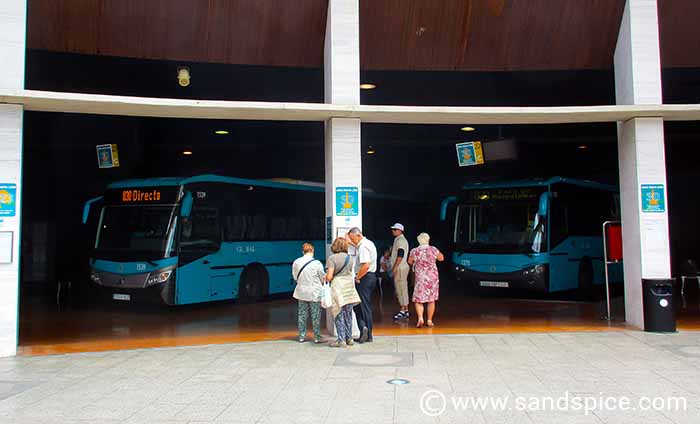 The total journey from Puerto de la Cruz to Maspalomas (including waiting times) took 5 hours, and cost just under €60 per person. Just a little cheaper than taking a flight (€81 including bus fares to/from the airports).

However, in our case we’d already booked 4 flights on this Canaries itinerary so were glad for the change. It also gave us the chance to take a brief look at a few more areas in the Canary Islands other than our principal destinations.

We would have just 3 nights in Maspalomas before making our return trip home via Madrid. Little did we know it at the time, but we would be in for quite a surprise…

If you enjoyed Gran Canaria Ferry, check out Tenerife & Gran Canaria with Stopovers in Spain. You may also like: 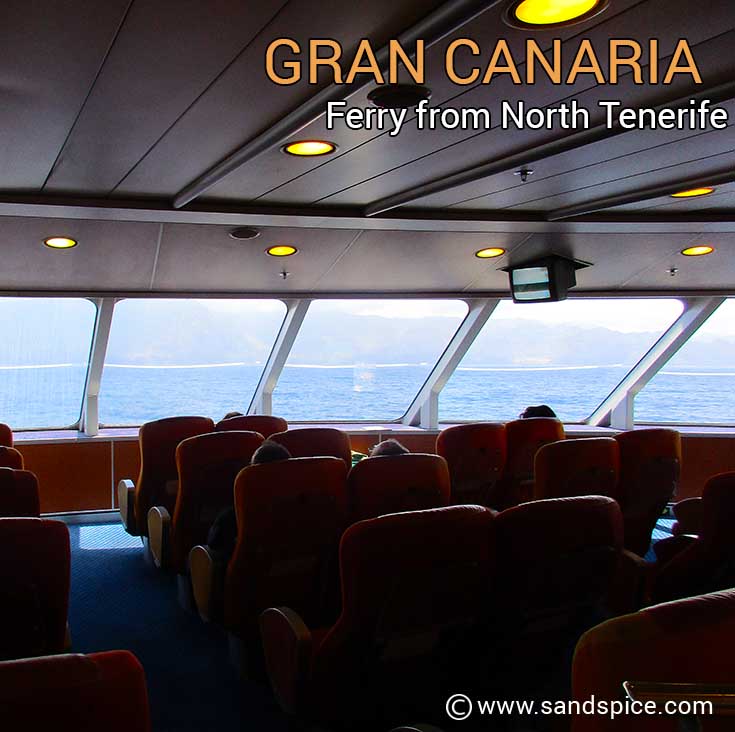 Hola, may I know if I can carry luggage onto bus 103 in Tenerife and bus 30 in Gran Canaria? Any size limitation of the luggage? Thanks!

Well, we had no problems with 8 kg each of rucksacks. There is dedicated space for luggage in the buses, so I don’t think you’ll have a problem.