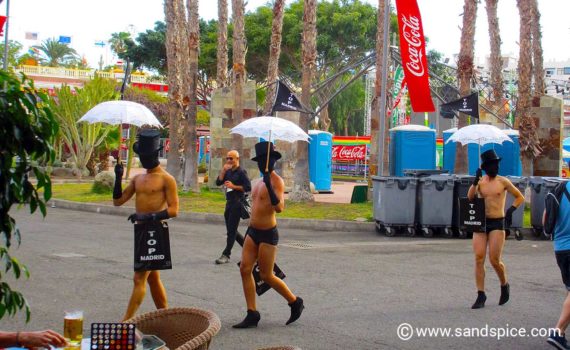 Following a 6-day break in Tenerife, we continued our Canary Islands journey by taking a ferry across to Tenerife’s sister-island, Gran Canaria. The ferry dropped us off in the north of Gran Canaria, from where we took a bus down the east coast of the island to Maspalomas. What we were hoping for was Maspalomas – sea and beaches: What we weren’t quite expecting was Maspalomas Gay Paradise.

… Best leave the kids at home

If you’re ‘gay’ and proud to show it (literally), then Maspalomas in the Canary Islands is the place for you. Here in Gran Canaria you’ll find Men-only hotels, gay resorts, transvestite bars, one long nudist beach, and hoards of muscular, scantily-clad young guys wherever you look.

Conversely, if you have kids (and you’re not Elton John), or you just don’t appreciate people overtly parading their sexuality, then you might want to look elsewhere. 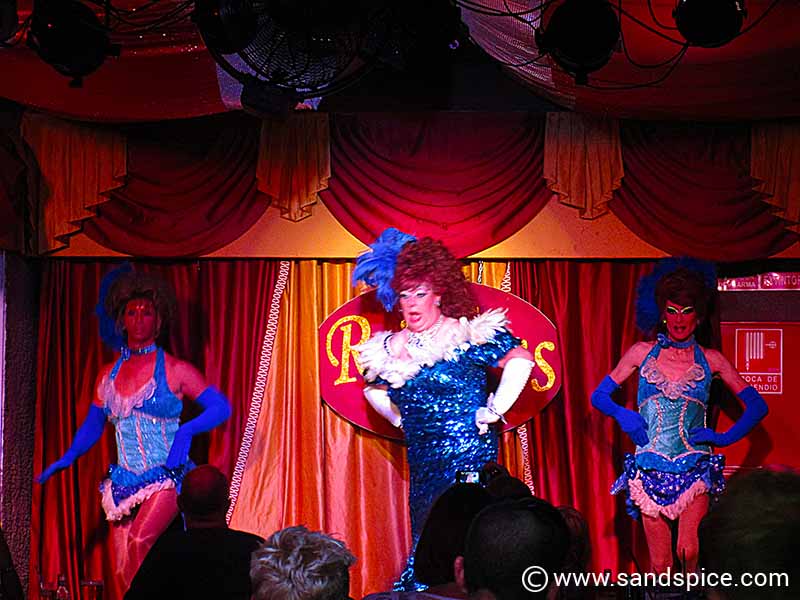 Getting into gear at Ricky’s Cabaret Bar, Maspalomas

Where to stay in Maspalomas – Tisalaya Park Appartments

Just so there are no misunderstandings, a few of the Maspalomas hotels boast (in their local advertising) that they are heterosexual-friendly establishments. However, if like us you book in advance online, you’re unlikely to see these types of disclosures.

The Tisalaya Park Appartments are located in the north-central area of Maspalomas, 3½ kms from the Lighthouse and 2½ kms from the nearest beaches. It’s not the easiest of places to find, so you’d be best advised to get there by taxi.

The complex comprises a series of 2-unit bungalows arranged around a central swimming pool.

Each bungalow is divided into 2 units: one upstairs and one downstairs. There’s no soundproofing, so you can pretty much hear everything from your neighbours unit. Fortunately for us, our neighbours upstairs were relatively quite. If you get noisy neighbours it would be a different story. 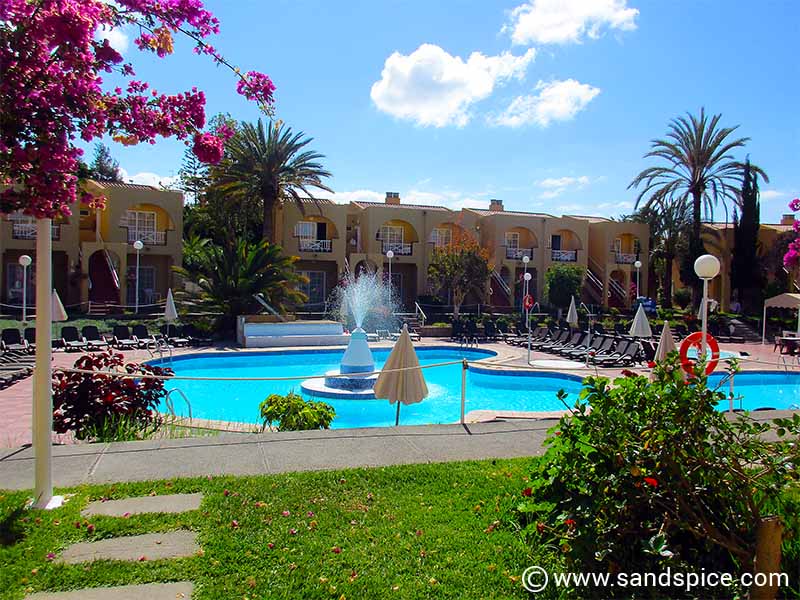 Our bungalow had the most uncomfortable beds we can remember (trying) to sleep in. In the bathroom we also had the worst – most uncontrollable – shower.

There are no mosquito nets on the beds or insect blinds on the windows, which means sleeping with the windows closed. Of course, there is no fan or air conditioner either. In the living area I enjoyed using the sofa until I found a large cockroach hiding in the cushions.

If you want wifi in your room you have to pay a supplement. There is free but excruciatingly slow WIFI in the Reception Area.

There’s a TV in each bungalow but no remote controller. You need to leave a deposit of €10 at Reception to borrow one.

We stayed for 3 nights at The Tisalaya Park Appartments at €38 per night (excluding breakfast – thankfully).

If ever we returned to Maspalomas (which is highly unlikely), we’d find somewhere else to stay – gay or otherwise.

The easiest and most direct way of accessing the beaches is to take a bus to El Faro (the Lighthouse), and then wander around from there.

The busiest areas are in the first 1 or 2 kilometers of beach travelling east from the Lighthouse. 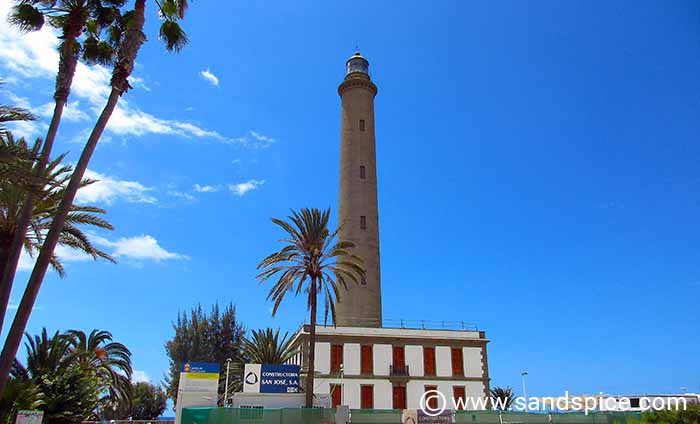 The whole beach area is pretty much nudist, so be prepared to experience some traumatic sights: Most of the people flapping their tackle appear to be North-European tourists, and far from young or body-beautiful.

If you can take the heat, keep walking further along the beach to the point where it veers north. Here it’s far less busy, with fewer distractions to put you off your lunch. 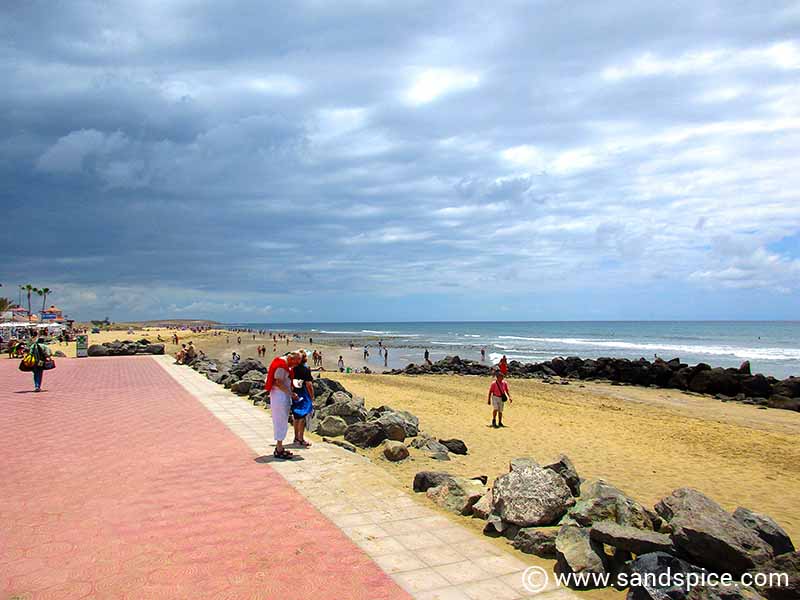 If you have some decent sun protection, head out into the sand dunes and enjoy some spectacular views across to the mountains.

Ideally bring a picnic with you as there aren’t many stalls where you can buy something to drink. 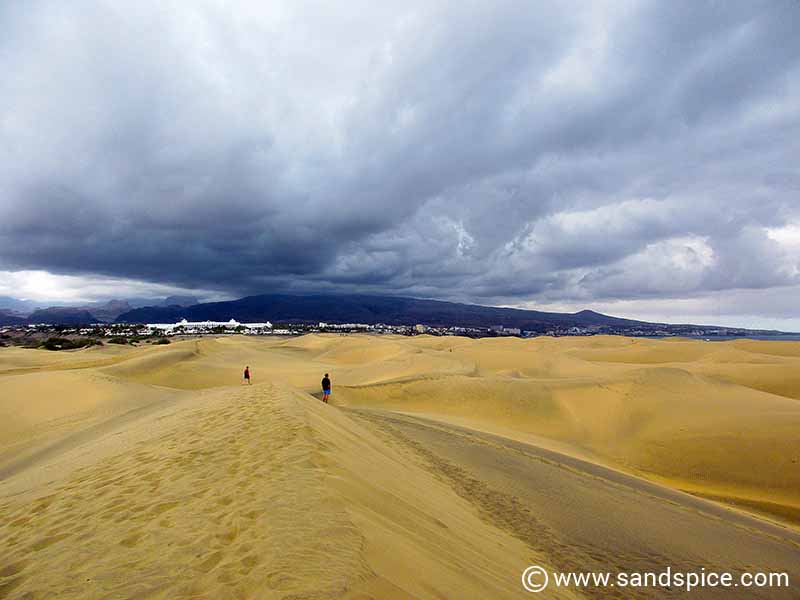 Eating Out in Maspalomas

The eating out options in Maspalomas are not of the same standard as elsewhere in the Canaries. Here, eating seems to be more of an afterthought. There are plenty of all-you-can-eat buffets, typically priced inexpensively at around €13 per person. The quality is not bad, but nothing you’ll remember or be inclined to repeat.

We tried a good Chinese buffet and a Canarian buffet.

We also tried the Dayx indian restaurant. Here I ate the hottest chicken vindaloo that I’ve tasted in a long time. 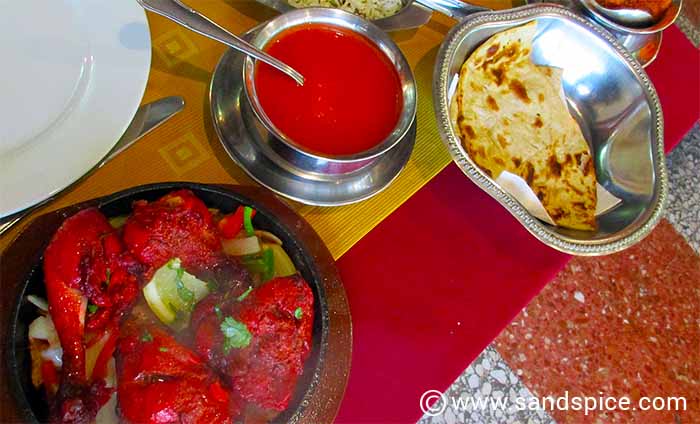 Vindaloo at the Dayx Indian Restaurant: Get ready for Montzuma’s revenge!

With starters and drinks our bill here came to €54 for two people – quite expensive for Maspalomas.

Much of the night life and many of the restaurants are located away from the beaches, clustered in and around the garish Yumbo center. 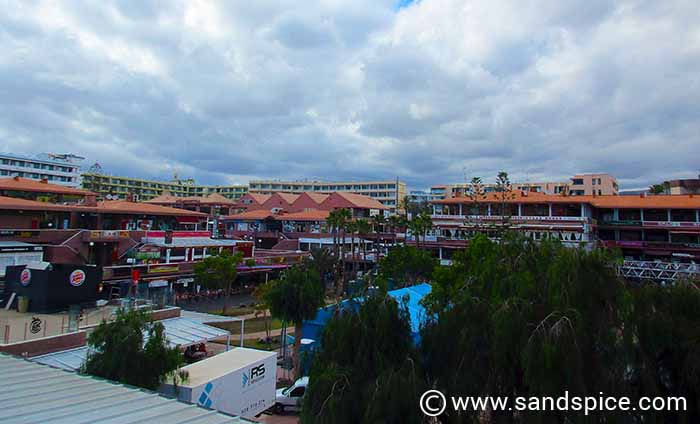 Although this place looks pretty bleak in the light of day, it comes alive at night with musical spectacles, cocktail bars and guys in outlandish costumes. 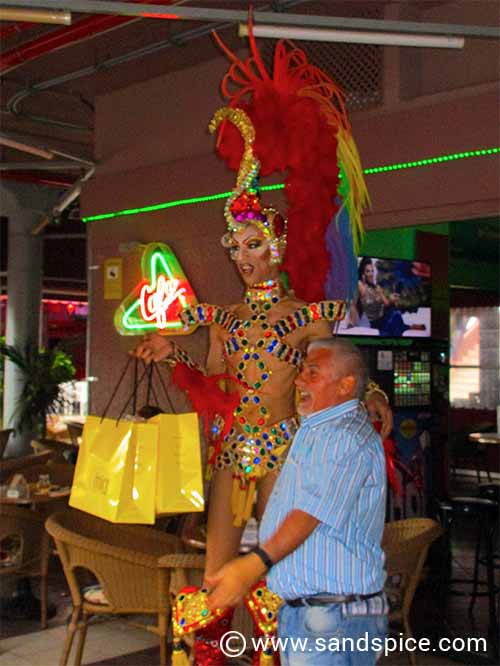 The lady with the yellow bags just made his day

In the Yumbo center you can also find one of the highlights of this scene – Ricky’s Cabaret Bar. Expect a truckload of transvestites and plenty of ribald North English humour. It’s a very entertaining way of passing a couple of hours.

You’ll need to get there early if you want a seat. 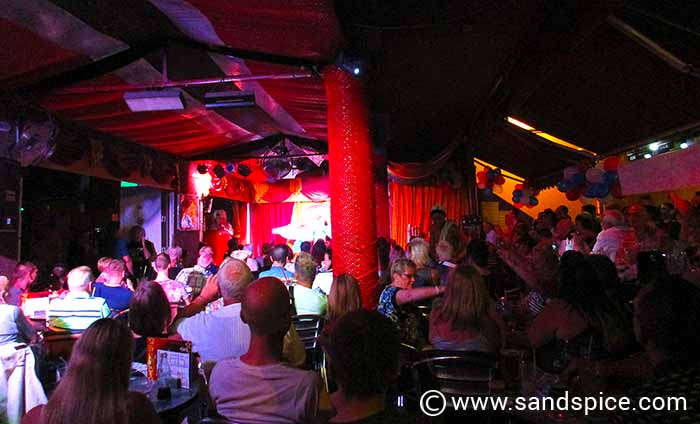 Maspalomas Gay Paradise – Getting there …and away!

Express buses from Maspalomas depart from El Faro bus station. The No. 90 bus departs every hour on the hour during the day. The No. 66 departs at 20 minutes past the hour every hour.

Both buses make around 6 or 7 stops and the journey takes x minutes. Bus tickets cost €4, which is a considerable saving over the €66 taxi fare (see below). 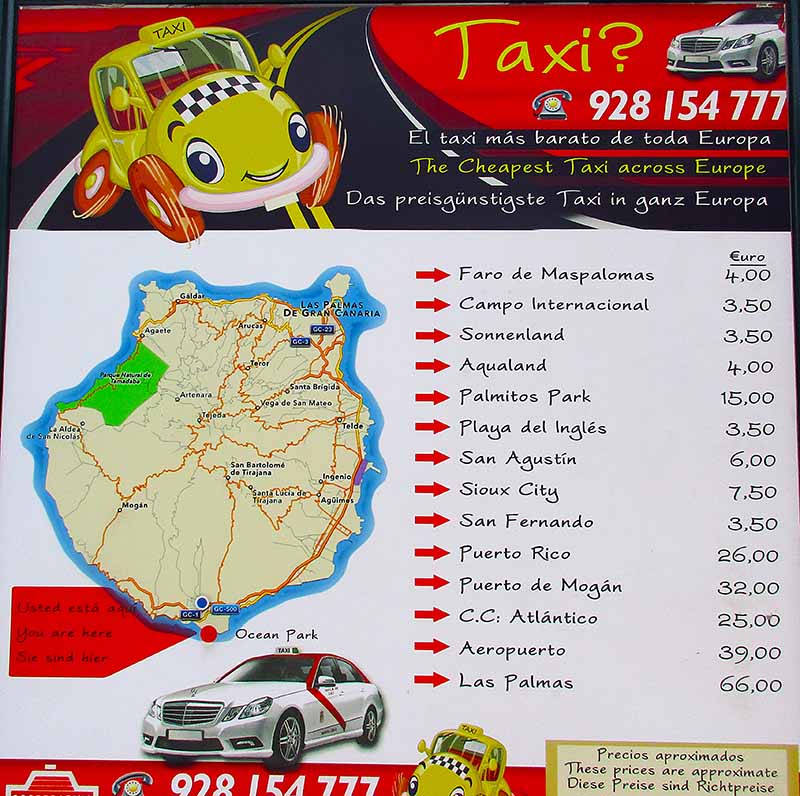 After 3 days in Maspalomas, the penultimate leg of our trip would be another budget flight from Gran Canaria to Madrid (€30 per person). Staying at the centrally-located Espahotel Gran Via Hotel, we were looking forward to a shortlist of activities.

These included a Flamenco evening, a visit to the Prado museum, gastronomic walks around the old quarters of the city, and the Sunday bazaar.

If you enjoyed Maspalomas Gay Paradise, check out Tenerife & Gran Canaria with Stopovers in Spain. You may also like: 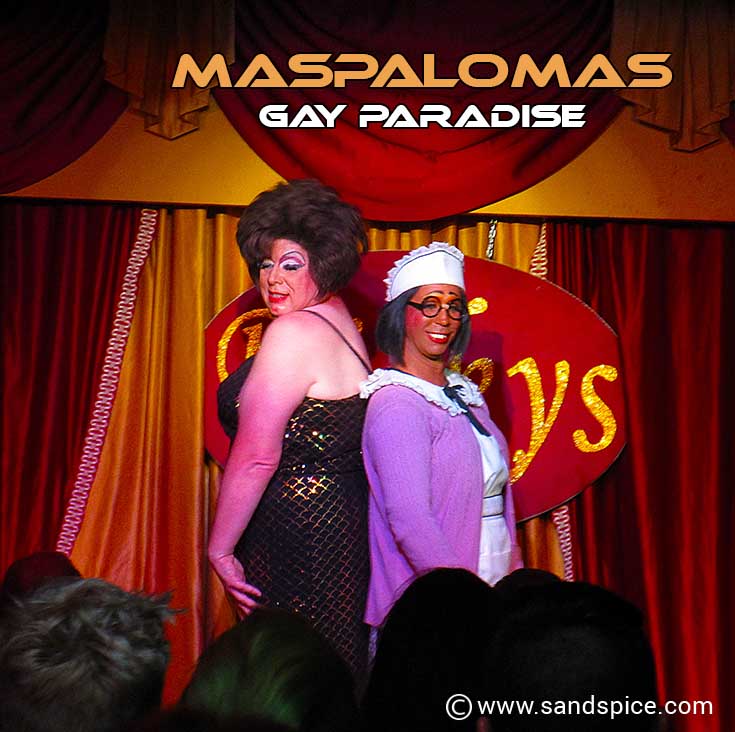