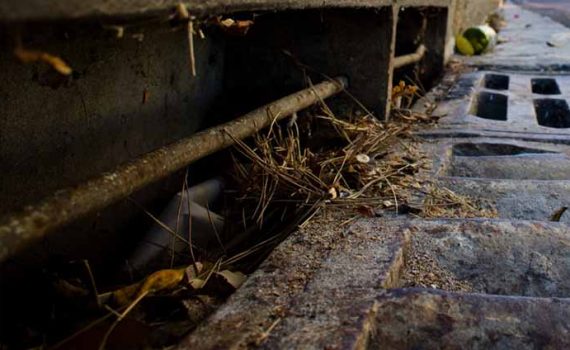 Lying dazed in a filthy gutter in the backstreets of Jepara, with blood oozing from fresh slices in my left arm…

This marked the low-point of my trip to Indonesia 🤕.

Events had spiraled relentlessly downhill from our arrival at Semarang airport, on a domestic flight with Lion Air from Jakarta.

Following the loss of a credit card at Semarang airport (see Honey, the ATM ate my card) we continued with our planned itinerary by taking a minibus to Jepara.

I had one remaining Visa card that had worked fine in Semarang. I’d used it to take out an additional IDR 1.25 million (around €87).

Our plan was to spend one night in Jepara at the Elim Hotel, and then take the early morning slow boat to Karimunjawa.

We knew that almost all establishments in Karimunjawa accept cash only. Added to this, the one available ATM machine on the island was (reputedly) often unavailable.

In Karimunjawa, Cash is King

Before taking the boat, therefore, we’d need to pick up enough extra cash to last us 11 days (our planned time on the island). This would amount to around IDR 7 million (around €490).

Getting that amount of cash would involve quite a few ATM withdrawals: The maximum withdrawal limit was either IDR 1.25 million or IDR 2.5 million, depending on the machine. 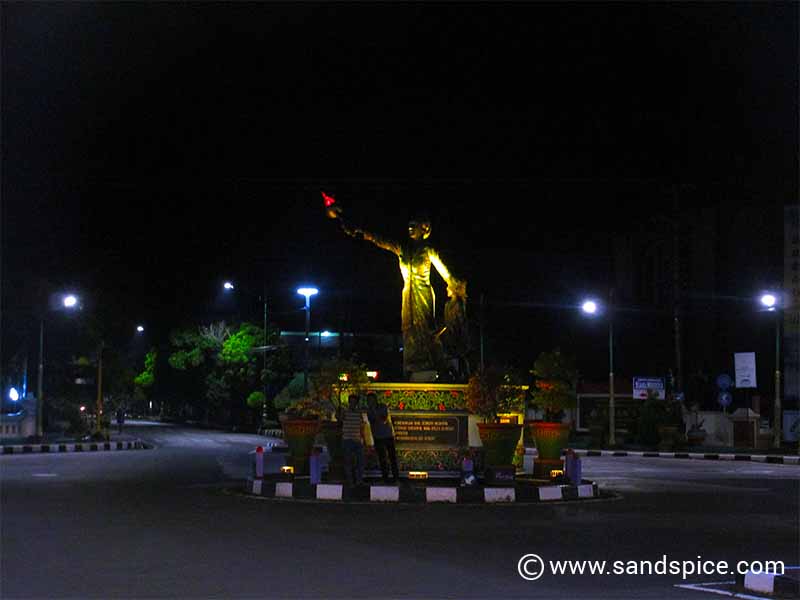 Central Jepara around midnight – Here’s the Mother of Kartini Statue

After settling into our hotel in Jepara, we set out in the late evening in search of the nearest ATM… In fact, we found a group of 6 ATMs.

However, it was with a feeling of mounting dread as I passed from one machine to the next, each bluntly declining my card. Evidently, my one remaining credit card had been blocked by the card issuer. Probably because of multiple ‘suspect’ transaction attempts in Indonesia.

Now we were really up the creek without a paddle. Not only did we have insufficient funds for Karimunjawa, we wouldn’t even have enough to last until our return flight home in 14 days time.

We had around €140 in cash, but that would only give us maybe another 5 days … assuming we could live like Mahatma Gandhi.

Back in Semarang – that morning – I had called the bank issuer of my first card (the one eaten by the ATM). I had been in the process of asking them to cancel the card, but was cut off when my phone credit ran out (the call cost €20 for less than 10 minutes, most of this time spent going through their security check).

Had they actually cancelled the card?

If not, there was still a chance we could return to Semarang and retrieve the gobbled card from the bank. However, we would have to get back to the Semarang bank sharpish. For security reasons, we knew the bank would destroy the card as soon as they retrieved it from the ATM machine.

Back at our hotel in Jepara, we found out that the first minibus back to Semarang would leave at 7 am the next morning. With a 2-hour journey, that should give us a chance to get to the BTN bank before they destroy the card.

In the meantime, there were two other matters to attend to:

♦  Call my card issuer (in the UK) to verify whether or not they had cancelled my card.
♦  Contact Arifin (the Indonesian Tourist Information agent who had already helped us) and ask him to phone the BTN bank as soon as they open in the morning, to ensure they don’t destroy the card before we get there.

I called my UK bank using my mobile, immediately giving them the hotel telephone number to call me back on when I get cut off. They duly called back and were able to confirm that my card hadn’t yet been cancelled. They also informed me that if I didn’t now cancel it, I would be liable for any fraudulent transactions.

… Thanks for the help, Santander 😡

Getting through to Arifin was less successful. He just wasn’t answering calls or text messages (…but it was now well after midnight).

We’d just have to head back to Semarang early in the morning, and take our chances.

After just a few hours fitful sleep, we woke at 5:30 am and enquired at our hotel reception about catching a minibus back to Semarang. The new night-shift guy on reception spoke little English, but eventually told us that the next minibus was at 3 pm in the afternoon.

Well, we knew this wasn’t right, but he was either unable or unwilling to call the minibus office, claiming it was closed. He gave us a basic hand-drawn map indicating where it was, so we decided to try to find it for ourselves, on foot.

It was raining, and the pavements everywhere all seemed to be broken, covered in filth, and extremely slippy. After around 15 minutes careful footwork, we realized the map was leading us nowhere. We had a slightly better home-printed map of our own, but in our hurry we had left it back at the hotel with our rucksacks (we were planning to pick them up on our way out of town). 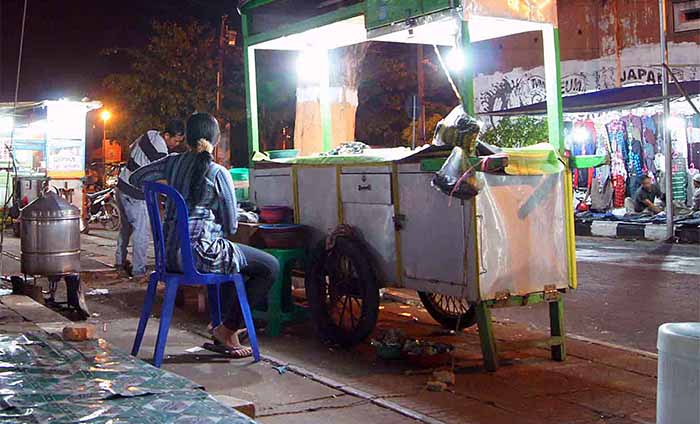 Time was running short: It was now just after 6:00 am. Our minibus would leave at 7:00 am and we were no closer to finding the minibus office. Walking as much as possible in the road, we backtracked to the hotel, now moving in double-time.

It was just then that I noticed a fishmonger busily chopping up a fish ahead of me on the sidewalk. He was surrounded by piles of rotting rubbish and discarded fish parts, all mixed up in the muddy filth covering the broken paving stones, A few frolicking, half-naked street urchins completed the scene.

There was one moment of inattention as I stepped off the slippery pavement to avoid the fishmonger. The next moment I was lying on my side in the gutter with blood oozing from 3 fresh slices in my left arm.

I jumped to my feet feet to avoid festering longer than necessary in the filth.

I was muddied, dazed and bruised, but didn’t have time to bleed: We had to catch that bus…

… (continued in Backtracking to Semarang City by Minibus).

If you enjoyed Jepara, Central Java, check out our Central Java Travel Plan. You may also like: 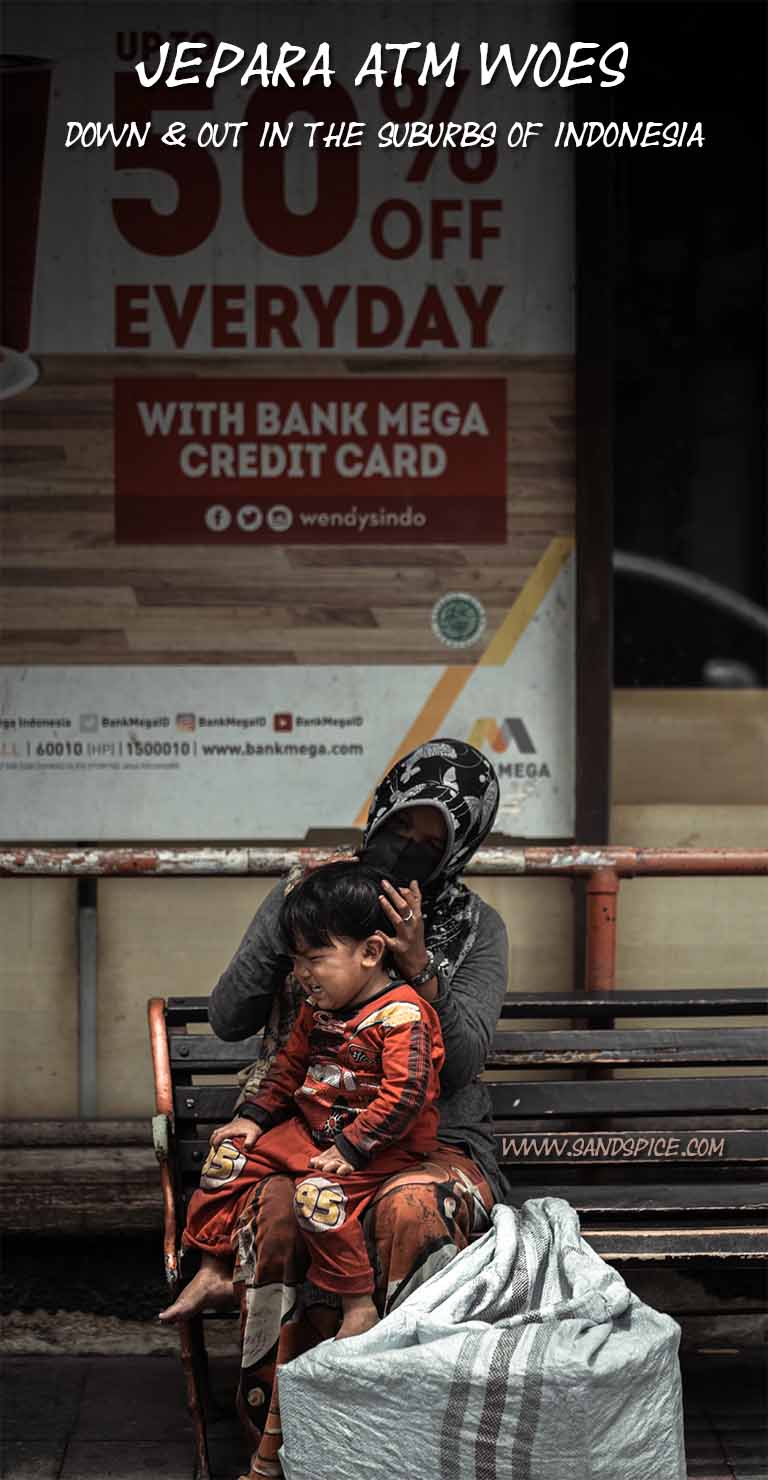 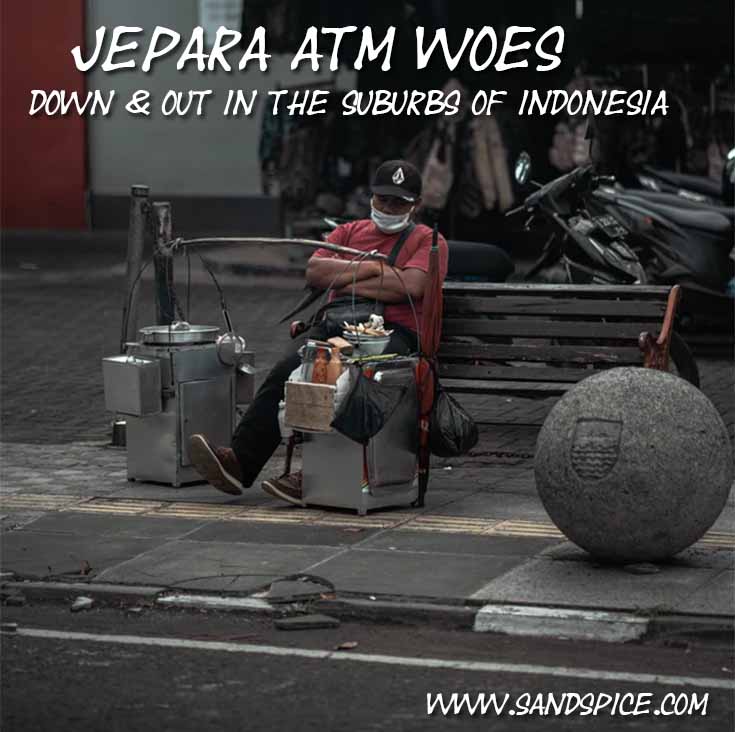