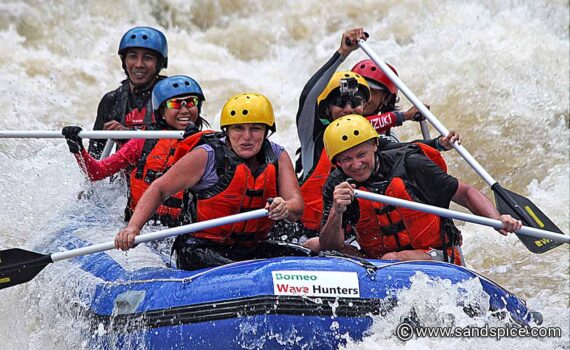 White Water Rafting is a “must do” activity if you are staying a few days in Borneo in the vicinity of Kota Kinabalu. As a result, the Borneo Wavehunters had been on our agenda from the very beginning of our planned trip to Malaysia, and we were lucky enough to experience it.

I say “lucky” because these excursions are very dependent on both the weather and train availability. The train is the only practical way of getting up to the embarkation point on the Padas river, and sometimes due to breakdowns or company politics there are no connections.

We arranged our trip via the staff at the Tempurung Seaside Lodge in Kuala Penyu. Most people however start from Kota Kinabalu city and transfer to Beaufort Railway Station – around a 2-hour journey.

Since we were already in the area, the Lodge arranged for a taxi to take us directly to Beaufort station around 07:00 am. There we were introduced to Ash – a cool guy from Borneo Wavehunters who was to manage our day out, and guide us down the river. 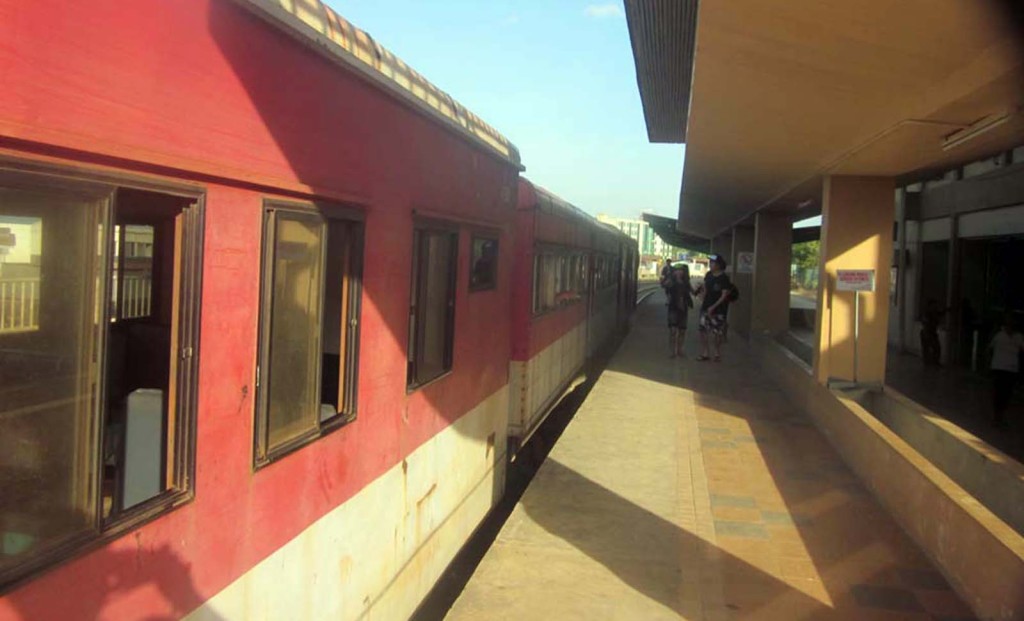 From the quaint Beaufort railway station, we took an old-fashioned steam train through picturesque countryside up into the interior (about 2 hours, following the river – its the only way up). 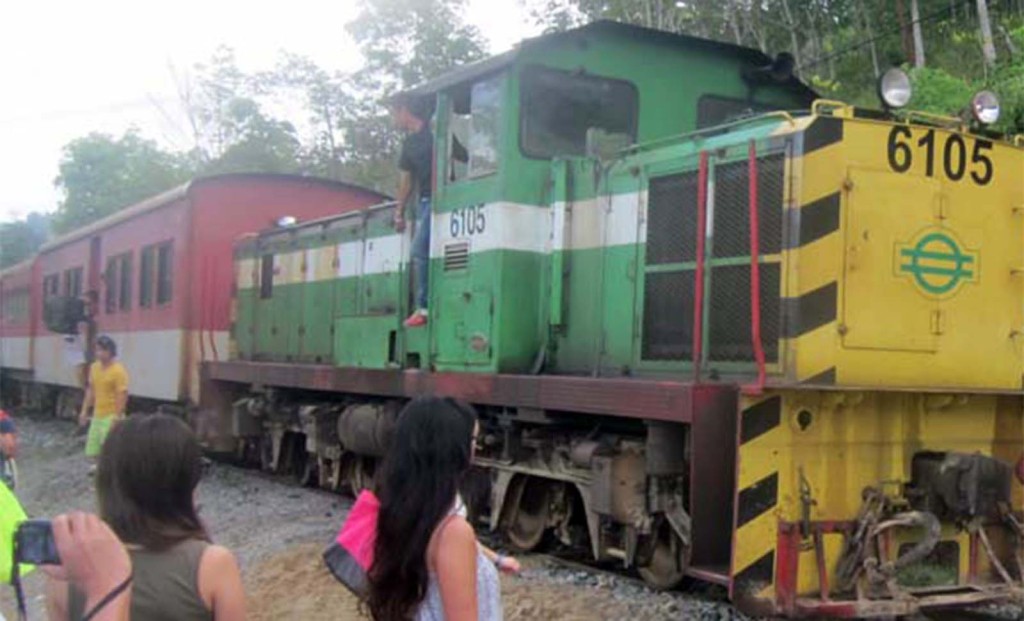 The steam train arrives at the halfway point

Half-way up at a place called Halogilat the track was damaged, which means we actually had to take 2 trains – one on either side of the damaged area, and walk over some rough ground between the two.

This makes the trip somewhat longer, but its a beautiful area, so certainly no problem for us. However, this does impact on the rafting company business, preventing them from offering more than 1 trip per day. 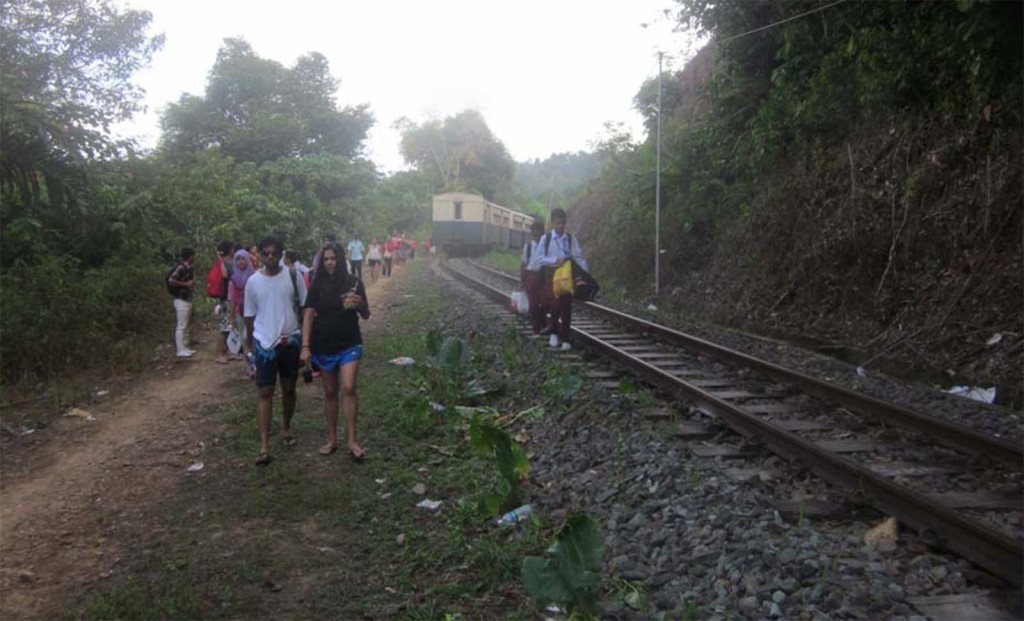 Get acquainted while waiting for the connection

After around 2 hours in total from Beaufort, we arrived at Pangi Station, where we disembarked.

There, all the rafters (about 15 of us) assembled and were given light refreshment followed by a 20-minute safety briefing by the Wavehunters river guide/raft master (Ash). You need to take along a change of clothes, since the likelihood of staying dry is about 0%.

You can leave any bags and belongings here with the staff, to be retrieved later at the ending point known as Rayoh Railway Station – just after the Chicken Barbecue rapids. 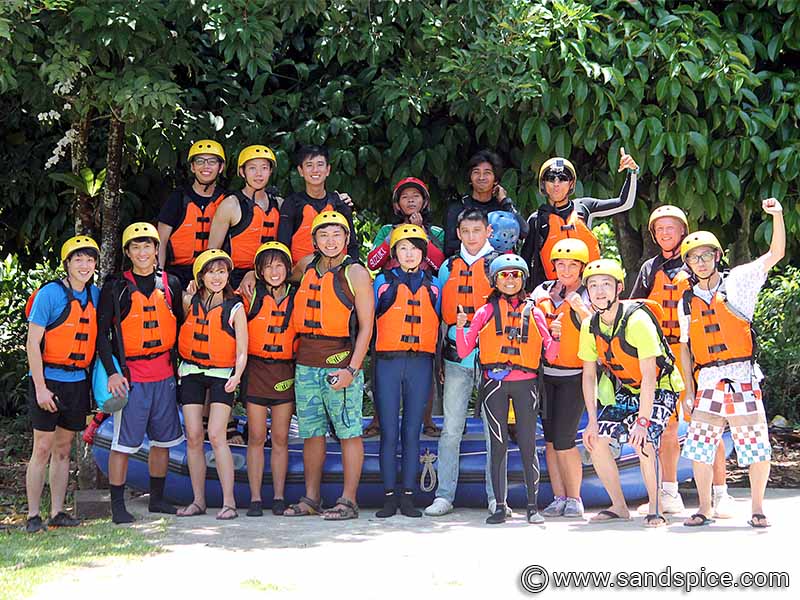 A bit of team-bonding before we get wet

It’s also at this point that you need to sign an indemnity form to clear Wavehunters in the event of an accident. This type of activity comes with no guarantees, and your standard holiday insurance won’t cover it either.

We were then introduced to our individual raft instructors (4 rafts in all), and got kitted out with helmets, life jackets and paddles. We divided into groups of around 4 each, and set out on our rafts accompanied by 2 instructors per raft who guide from the rear.

Any nerves were calmed by the very relaxed and professional attitudes of the Borneo Wavehunters staff. 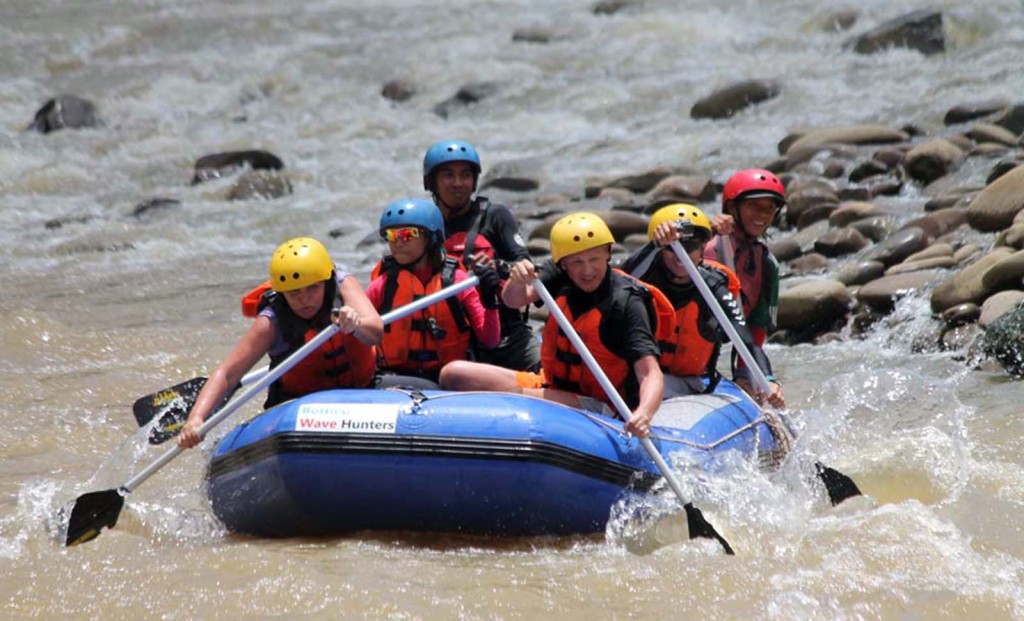 Borneo Wavehunters: Setting off down the Padas river

In fact, there was a very amusing banter going on in our raft from start to finish. It was clear that our instructors knew what they were doing, and were enjoying it as much as we were.

The Padas river is rated as a class III/IV for rafting difficulty (i.e., Intermediate to Advanced: There are 6 levels in all). It comprises a 15 km run through 9 rapids – reputedly the best in Asia.

At the time of year we went (March) there is a 50/50 chance of capsizing. This increases to 70/30 if you go in November when the water level is higher. 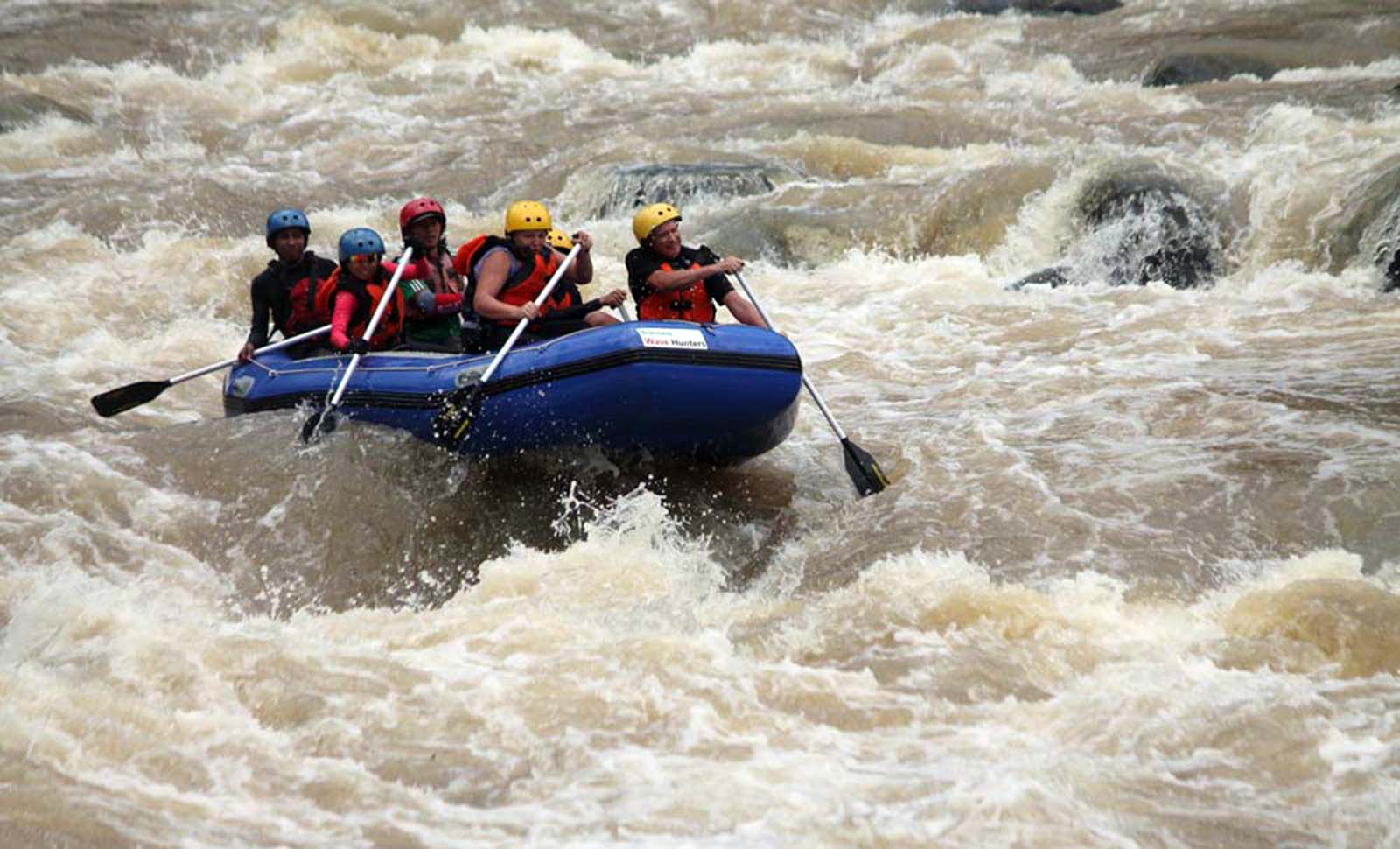 The descent took us about 1 hour, though it felt more like 15 minutes. The Wavehunters organizers had a photographer snapping high-speed pictures at key locations along the route. It all started off easy enough, so we had a chance to synchronize the timing of our strokes.

We then went through a succession of progressively more difficult rapids: The more tricky it is, the faster you row and the quicker your blood starts to pump. The different rapids each have their own character, with matching names such as “Headhunter”, “Cobra”, “Scooby-Doo” and the nerve-wracking “Washing Machine”.

The only stomach-churning we experienced was from the sudden 6-foot drops and rapid spinning around as the boat occasionally slipped out of control. We were so busy trying to stay afloat that we had little time to worry or to appreciate the amazing rainforest which acts as the backdrop to this intense activity.

Fortunately, there are relatively calm sections between the rapids where you can readjust your footing (firmly wedged into the sides of the raft), and exchange quips with the Wavehunters guides. 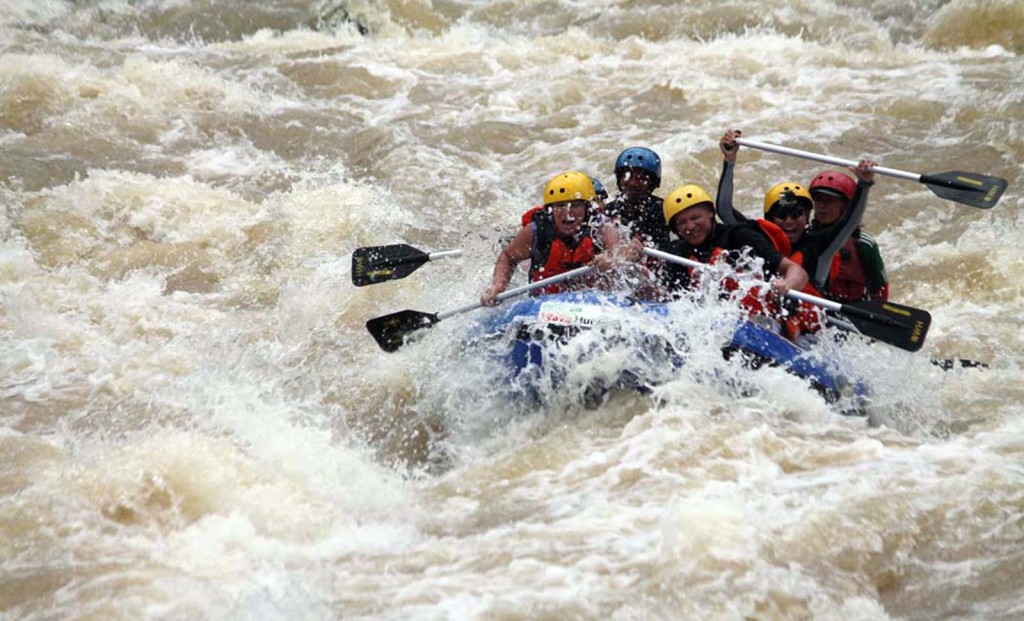 The trip finishes with some larking around in a safer area of the river. If you’ve not capsized by this time, there’s a good chance you’ll now voluntarily end up jumping in the river anyway. They say that swallowing water from the Padas river will make you sick – unless you do so after jumping or being thrown out of the boat.

Back at Rayoh, we pulled our rafts ashore before changing into dry clothes and then tucking into a Malaysian barbecue. While our clothes dried, we checked out the photos and films taken by the Wavehunters organizers and guests. We then took the train again back down to Beaufort, thoroughly knackered!

The following day we would be travelling on to Sandakan on the opposite coast of Borneo. We had an urgent appointment to meet some orangutans…

Update
Borneo Wavehunters have now been re-invented as WaveHunterAsia with a spanking new website and a variety of new tours, including Padas White Water Rafting.

If you enjoyed Borneo Wavehunters, check out our East Malaysia & Borneo adventures. You may also like: 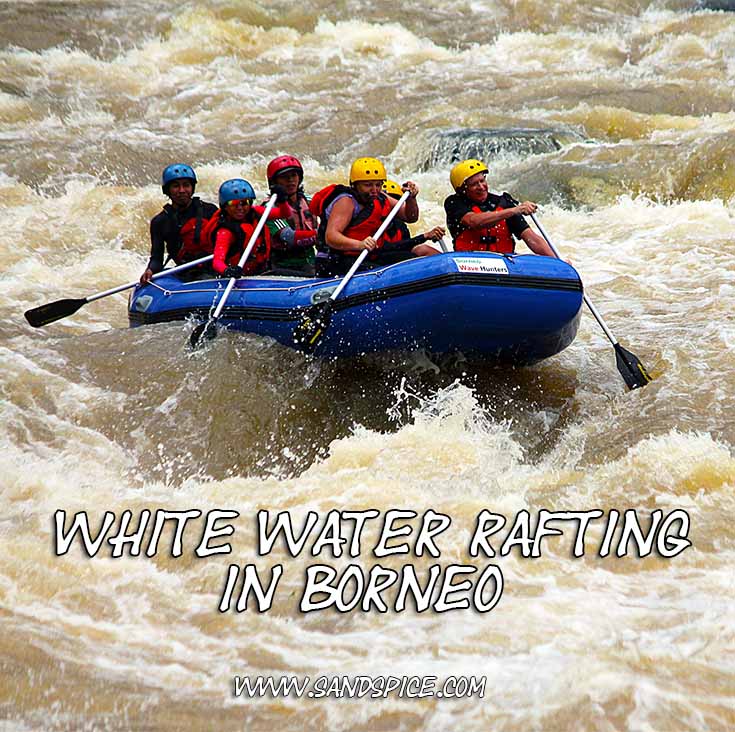 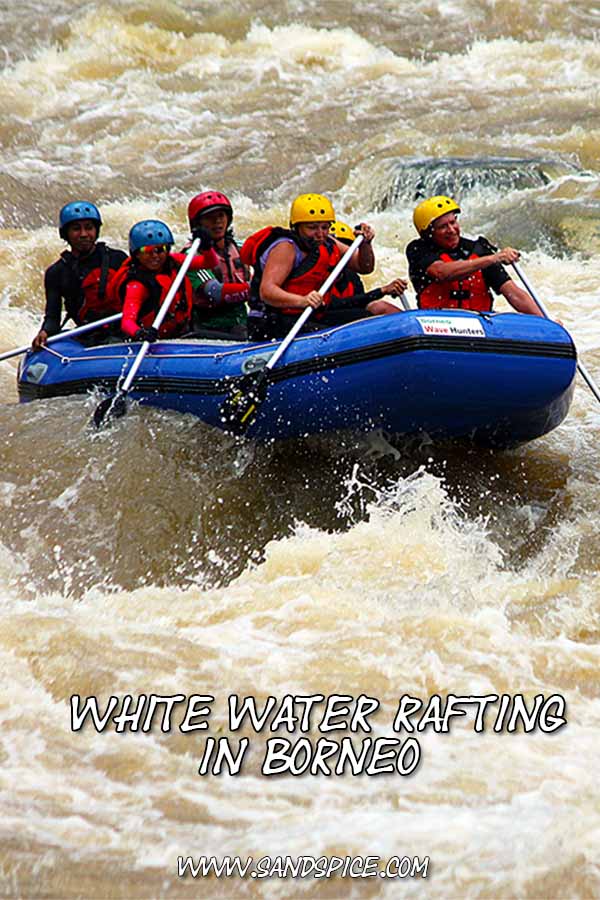 Awesome! I never tried Water Rafting but i am kind of like it. A must try agenda.