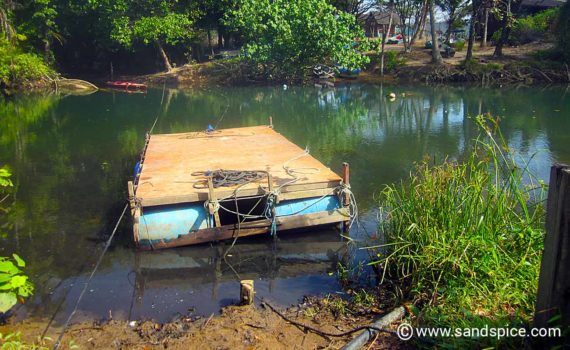 Malaysia has some beautiful islands, and Tioman is no exception, located 30 kms off the east coast of the Malay peninsula. It’s quite a journey to get there, but if you stay just a few nights, it’s well worth it.

One of the nicest beaches on Pulau Tioman is Juara beach on the eastern coast. There are rivers at both ends of Juara beach. On the northernmost river you can hire a kayak and navigate your way a short distance upriver into the Tioman rainforest.

Just before the river at the southern end of Juara beach is the Juara Turtle Project. This is a voluntary organization set up to help protect sea turtles, their nests and eggs. Staffed mainly by young foreigners taking time out from college to learn about the issues, they accept donations from interested tourists.

It’s easy to mistake this place for a bungalow park or restaurant as there are several young people hanging about (this is where the staff eat and sleep). It is however a private area, and you need to make a donation if you want to visit. 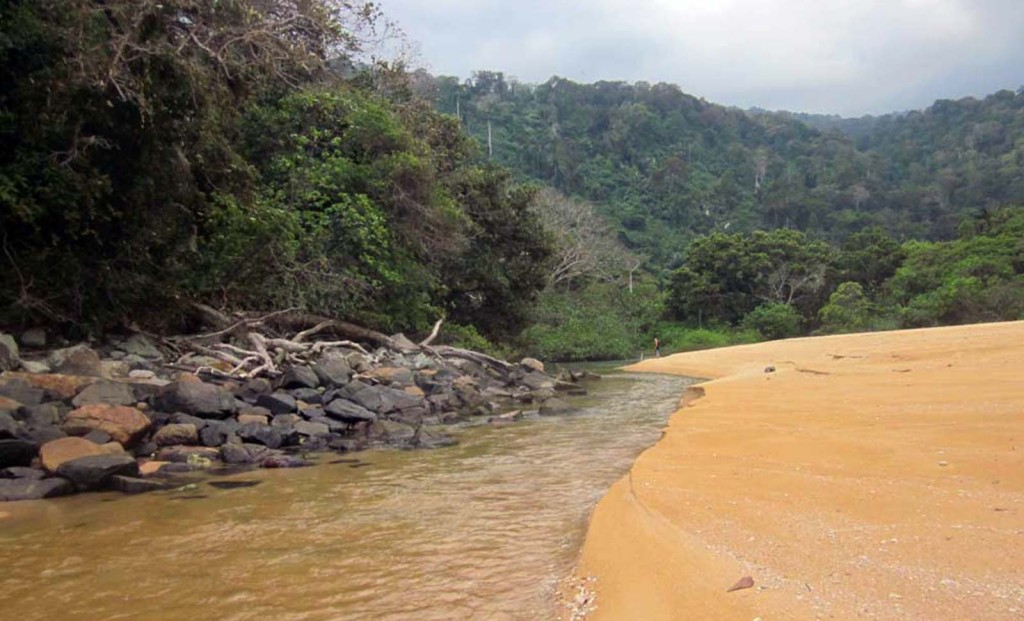 Yellow sand and river at south end of Juara beach

Ants in your Pants!

Beyond this area, you reach a river flowing into the sea from the rainforest. At its narrowest point close to the sea, you can wade across it to the jungle on the other side. If you do this, though, be prepared for some thick jungle before reaching the path up into the mountain.

We tried this, and found a deserted cabin about 30 meters into the jungle. It is apparently owned by a foreign lady who visits for a few months each year, and spends her time there isolated from civilization. She must be pretty tough because, among other creatures, the place is infested with red ants.

We were unlucky enough to disturb a nest, and suddenly had dozens of them crawling into our hair and clothes, and biting like they meant it. We beat a hasty retreat back to the river to strip off and assess the damage. 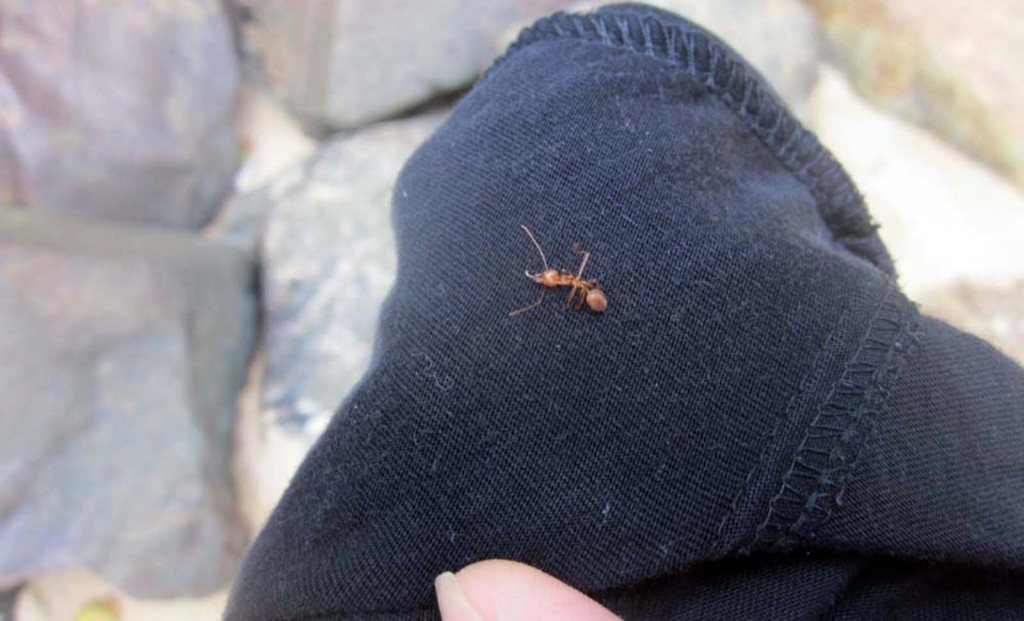 Into the Tioman Rainforest: Attacked by Red Ants!

We were going to have to find another way across the river further inland. Even without the ants, the jungle here was too impenetrable.

Further upstream the river widened, but we found a primitive mud jetty with a self-operated rope-raft. This was our chance to cross the river Indiana Jones style! Unlike me, you might want to try doing this with some form of foot protection to avoid the leeches.

The rope was predictably slimy, but we managed to stay mostly dry. On the other side of the river, the path was easy to spot, and thankfully was clear of undergrowth. We were now going to head up steeply into the mountain to locate a nice little spot for a picnic. 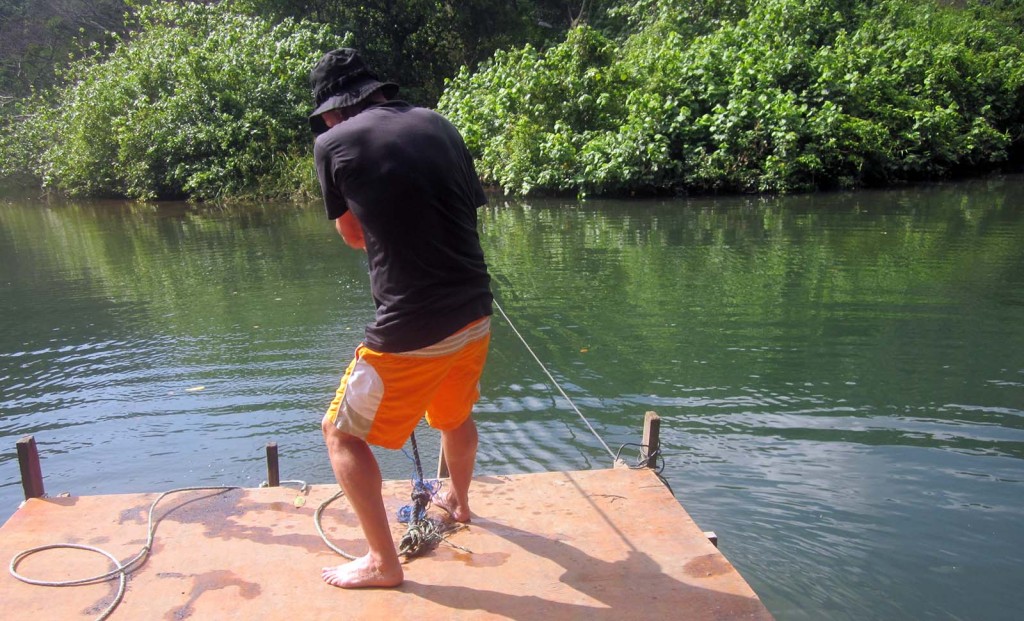 It’s not all about lying around on beaches

Not far up the path, we came across an area of rubber trees, already set up for latex-extraction. This is big business in Malaysia, and evidently quite labor-intensive. 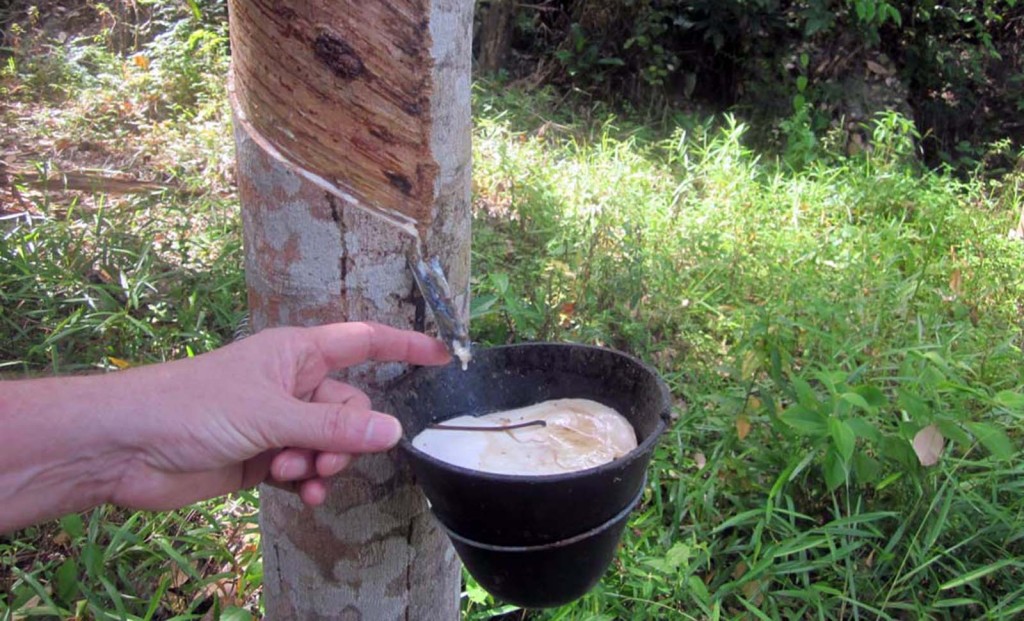 Into the Tioman Rainforest: Fresh latex

They cut grooves into the rubber trees, and attach small containers underneath to collect the latex. After a few days, they collect the congealed and spongy rubber extracts and take them off in baskets for processing. 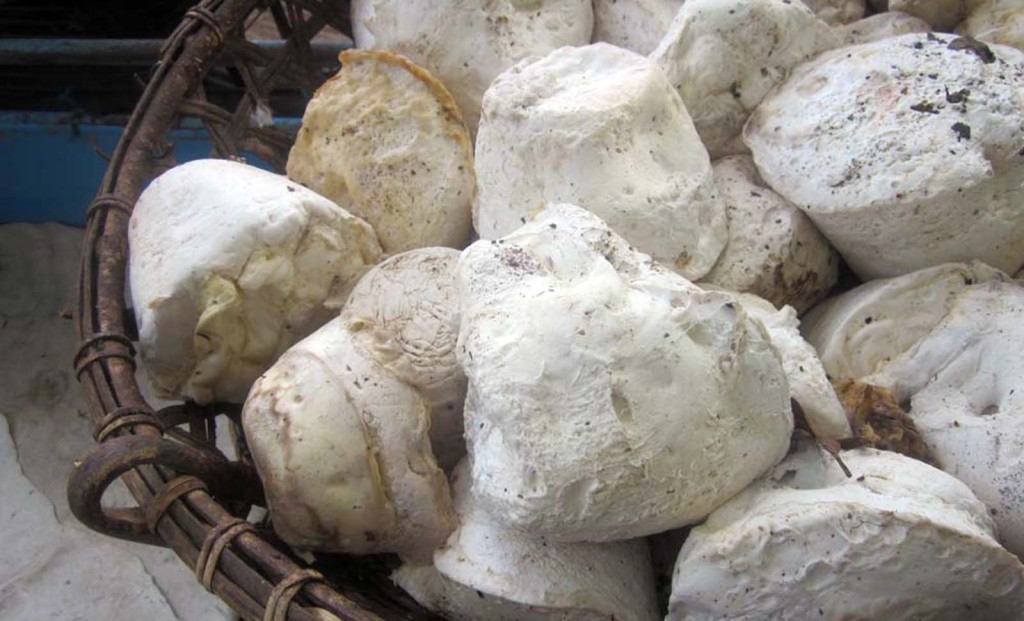 Further into the Tioman Rainforest

The meandering path up into the mountain gradually narrowed and got steeper as we ascended. It wasn’t too difficult to follow as there was a water supply pipe running approximately in the same direction.

It’s a really pleasant trek, occasionally passing over small bridges across streams, through undergrowth and under fallen trees. All the time with the background hum of the jungle and distant chatter of monkeys. 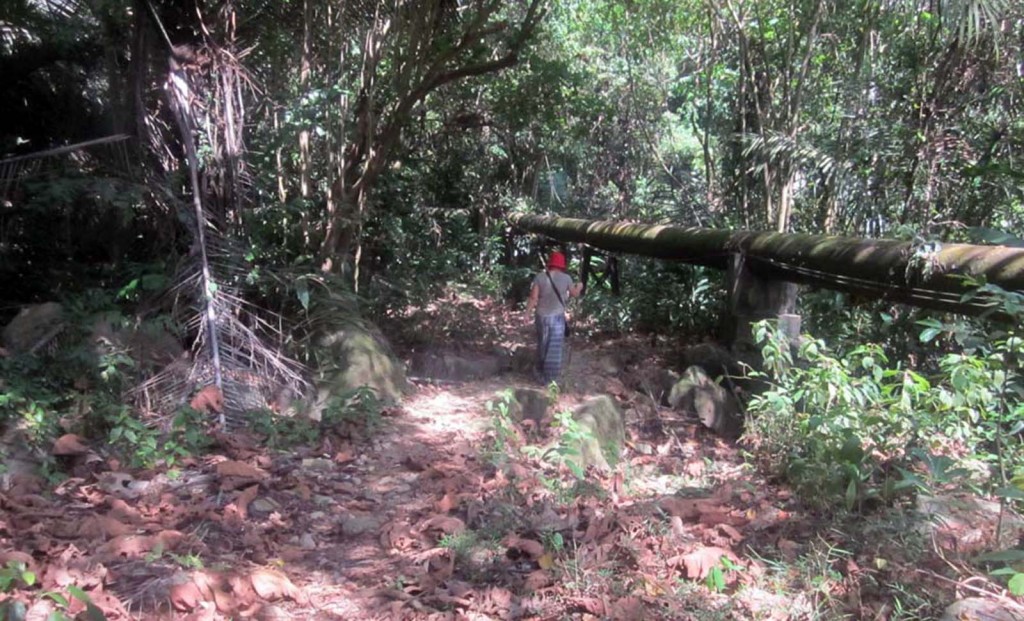 After an hour or so, we were treated to a panoramic view back down the mountain towards the sea. We had brought with us a couple of liters of water each, as well as fruit for our lunch.

We weren’t sure quite how far it was to the waterfall at the top.

Around half-way up we passed across a humming power station, but after this we began to hear sounds from the river somewhere to our right. 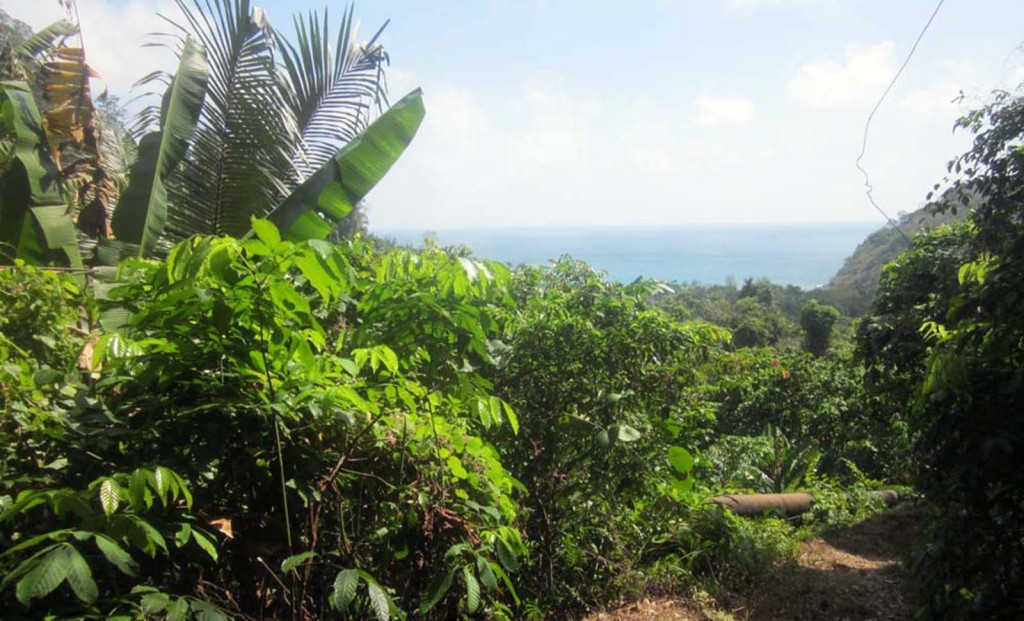 Looking back down over the rainforest

It took around 2 hours of uphill climbing to reach the waterfall. Beyond this point, the path disappeared, so we decided to quite while we were ahead. After a lunch of oranges and a cool dip in the water, it was time to head back down again.

It gets dark here quite early (and surprisingly suddenly), and we didn’t want to be stuck up high on the trail when it did. 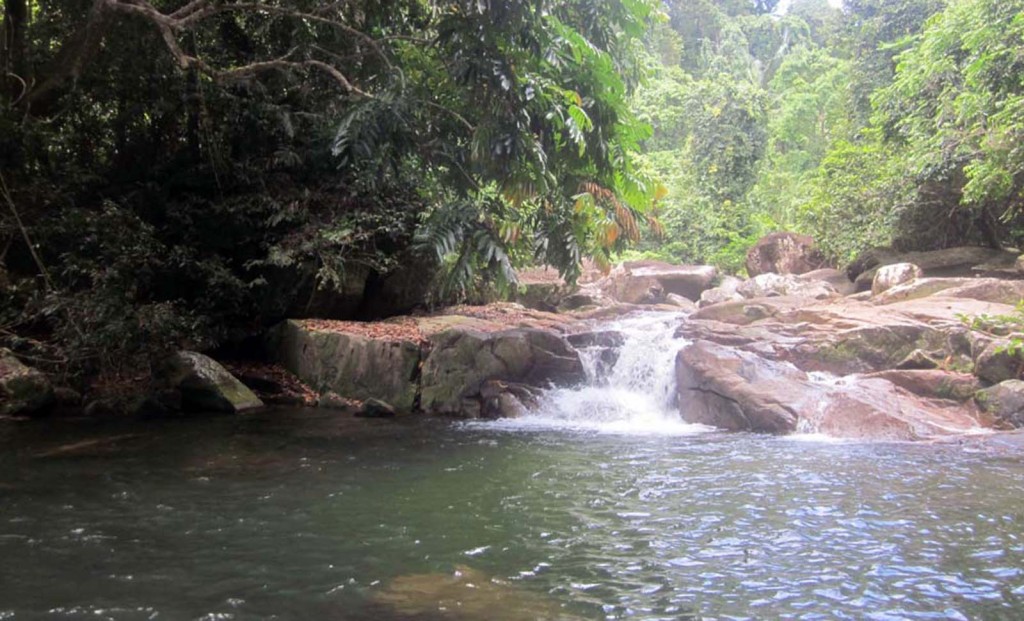 The Reward! A waterfall high up in the rainforest

Coming down was a little quicker, but possibly more difficult due to the steepness of the trail. On the way back, we picked off a few cuttings from some of the plants, hoping they would survive the rest of the trip and the journey back home.

After our short stay in Tioman, we were heading back to the mainland and north up the coast to Kuantan.

If you enjoyed the Tioman Rainforest, check out our East Malaysia & Borneo adventures. You may also like: 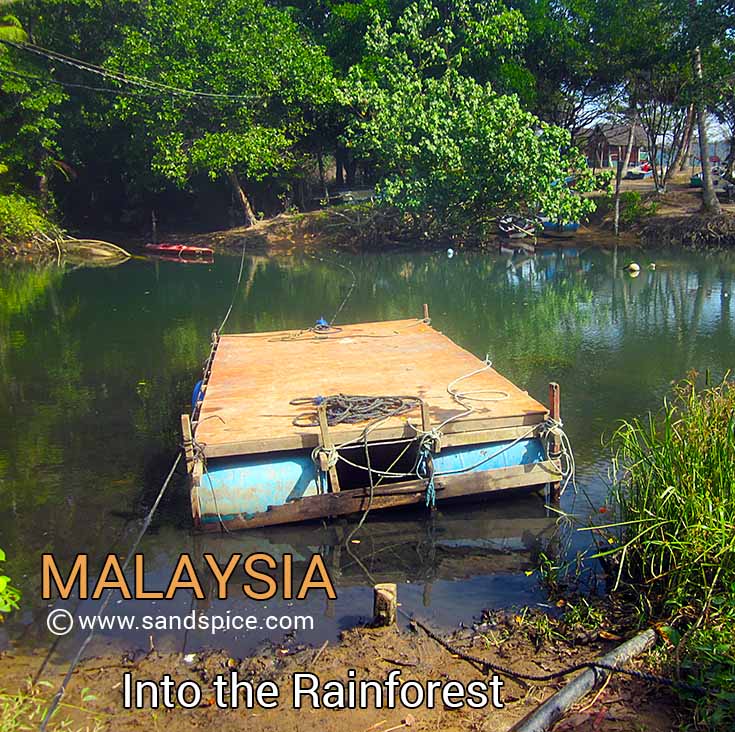