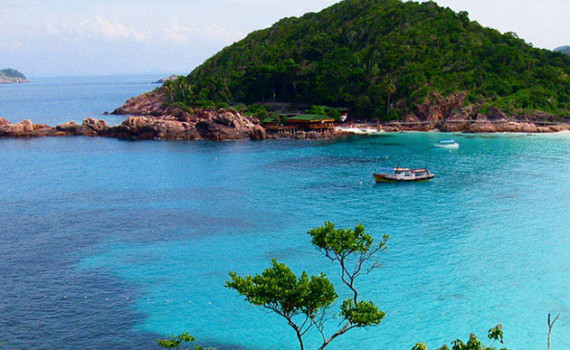 One of the highlights of our trip around Malaysia and Borneo would be our visit to Tioman island on the east coast of the Malay peninsula. To get there, we needed to reach the port town of Mersing from where we could take a ferry across. Although we arrived at the terminal building in the morning, the Tioman island ferry wasn’t due to leave until early afternoon.

Depending on the weather, the ferry times can vary. There is an elaborate ticketing process, friendly staff, and a comfortable “departure” area. Return tickets cost RM70: There is even a discount for the over 50s. 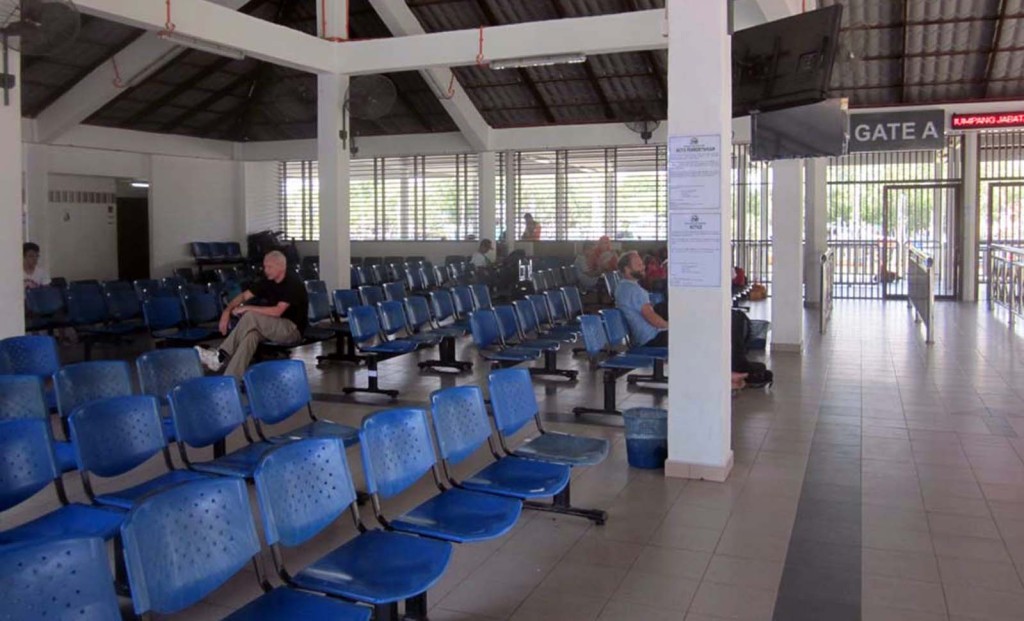 Since the ferry stops at several locations on Tioman island, you can save yourself a lot of stress by knowing in advance at which jetty or “kampong” (village) you want to disembark.

The boat handlers don’t hang around at the various stops, so you have to be ready – with your bag(s) – to exit the boat. This can be difficult as the handlers also insist you put large rucksacks, etc. in a separate area from the seating areas of the boat. 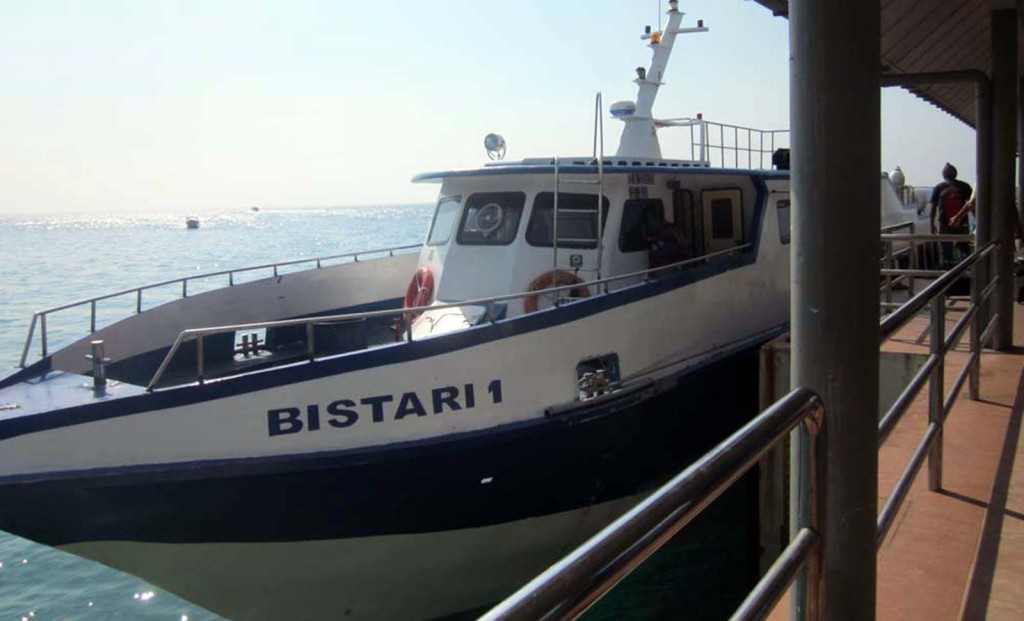 This is the order of the stops on the way to Tioman:

It is the reverse order on the way back from Tioman to Mersing, but then at least you’re not likely to miss your stop. If you fly over to Tioman, the airport is at Tekkek, right opposite the jetty. 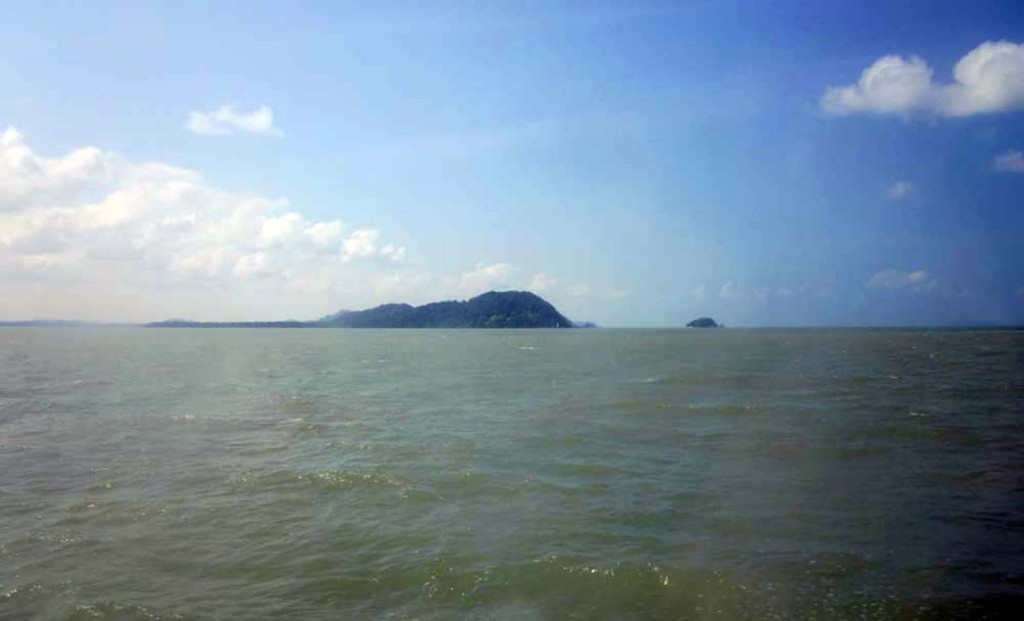 View from the ferry

The boat is comfortable enough, though it can get quite crowded, and there’s a bit of a scramble to get on/off at the various stops.

It can take around 2 hours to reach your destination, taking into account the various jetty stops. 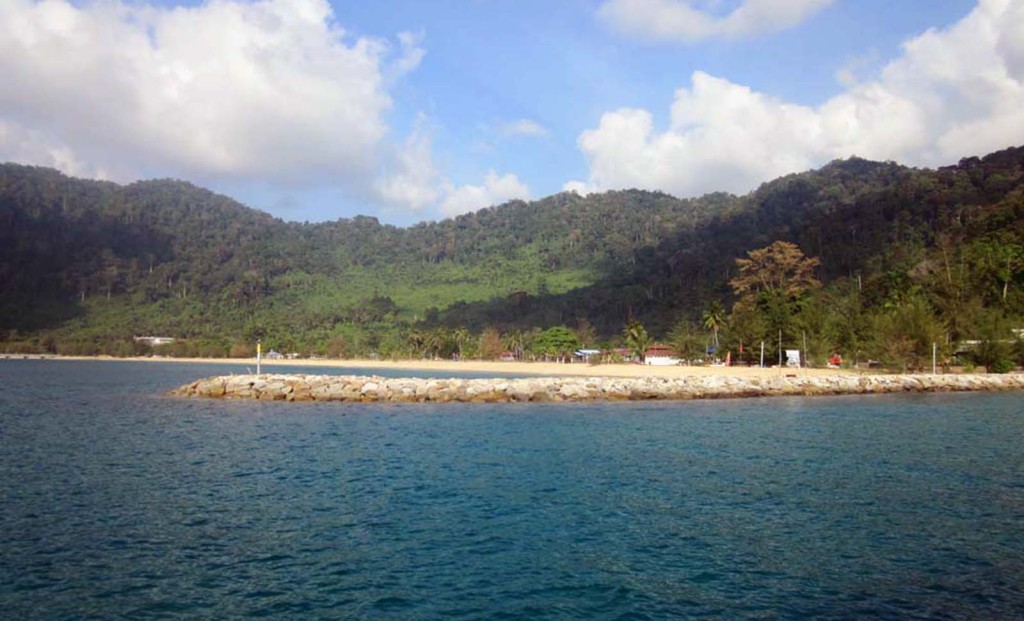 Arriving at one of the ‘kampongs‘ in Tioman

Before starting our trip to Malaysia, I had emailed the owner of the resort we were staying at in Juara (on the other side of Tioman island). He told us to disembark at Tekkek.

He said there would be a few local taxi boys waiting there, who would take us Juara for RM35 per person one way. 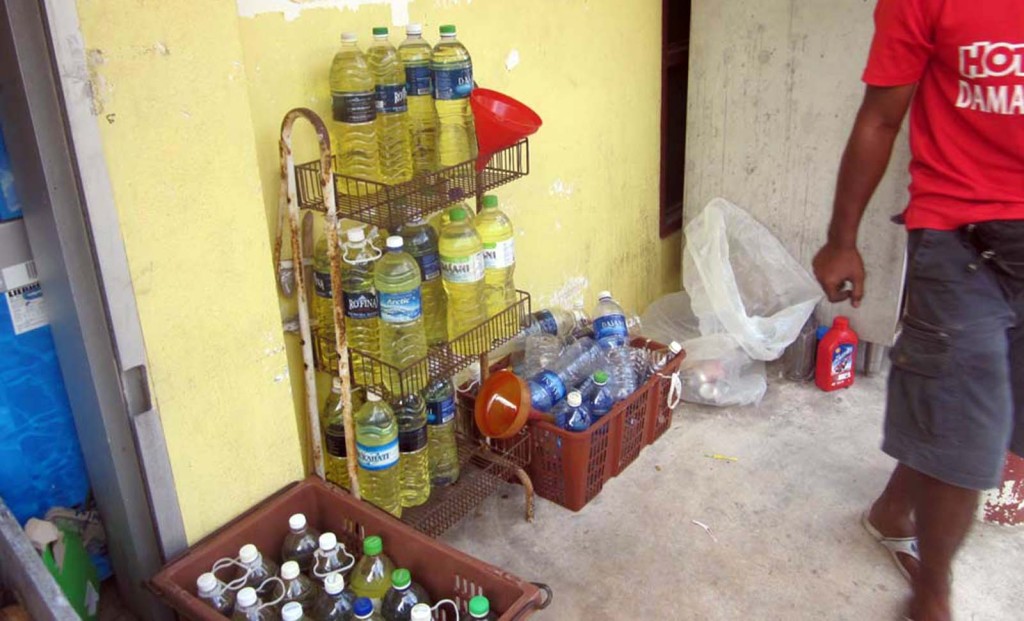 Taxi over the Mountain

The taxi was actually a 4×4, which is just as well considering the steepness of the central mountain over which we had to travel to get to the other side of the island.

This leg of the journey took around 40 minutes.

Before leaving, the taxi driver asked if we wanted to pick up any supplies in the supermarket, since there are no real shops in Juara where we were heading. This actually is not a bad idea. 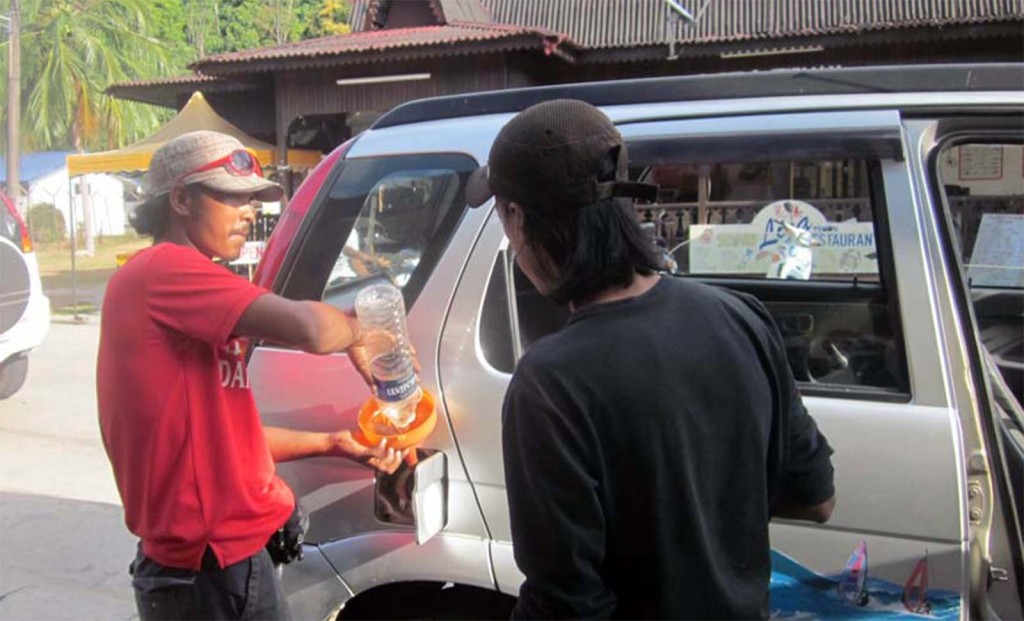 Loading up with a full tank could take a while…

Juara beach is a 2 km stretch on the eastern side of Tioman Island. Once we descended from the mountain, we were heading to 1511 Coconut Grove, at the far end of the beach.

The tantalizing 5-minute drive along this stretch makes it clear why these beaches were depicted in the 1958 movie, South Pacific as Bali Hai. We were now looking forward to 4 nights here – our longest stay in one place during this trip. 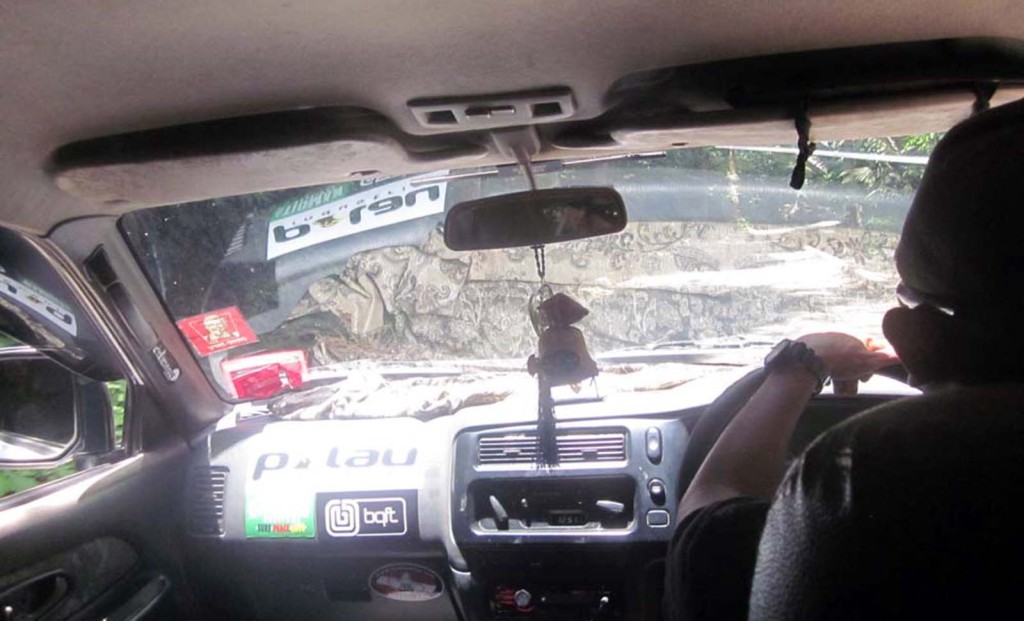 If you’re up to it, you can also cycle across the central mountain

After 4 days in Tioman we would be taking a series of flights down to Kota Kinabalu in Borneo to begin the second half of our Malaysian journey.

If you’re interested in the Tioman Island Ferry, check out our East Malaysia & Borneo adventures. You may also like: 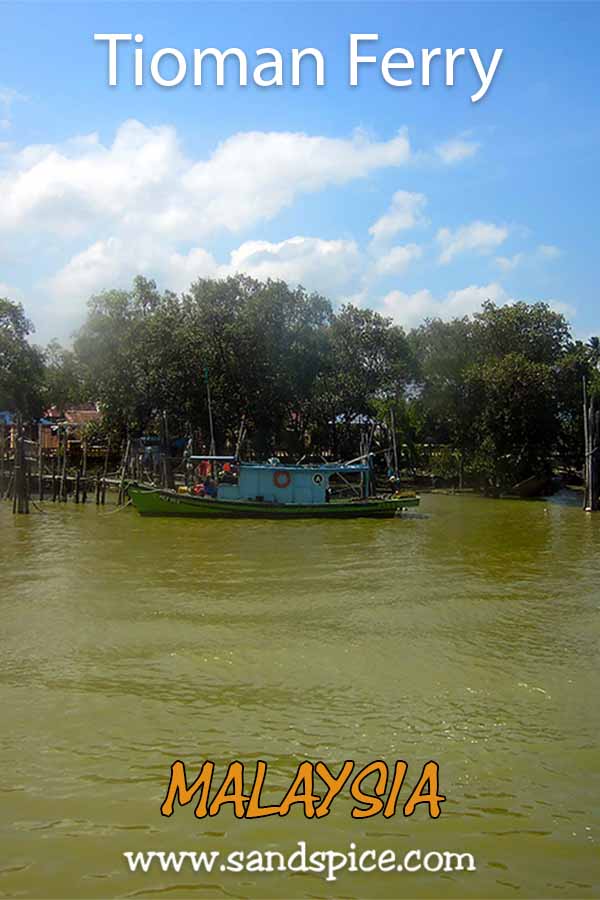 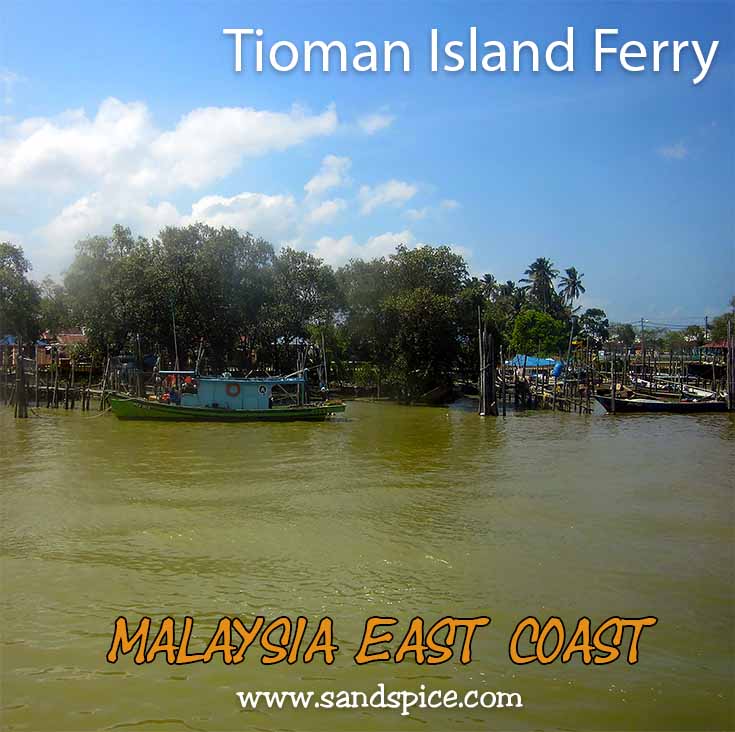 I would love to live there 😍

If it’s awesome diving, beautiful beaches and exquisite lounging you’re after, yes, Tioman will deliver. In spades. But just a quick note to repeat Tioman visitors, or those wishing to go there in the future. Since we go to Tioman quite regularly, we’re seeing more and more travellers, especially from overseas, arriving at the Mersing jetty too late to catch their ferry, because it’s full.

I think the reasons are: 1) The recent popularity boom Tioman has been enjoying. 2) The recent rule prohibiting passengers from sitting on the ferry sun-deck. 3) All other ferry types have discontinued, including the fast-ferries and the slow ferries, as well as the catamaran from Singapore. All this has resulted in a higher chance of passengers left stranded during the busy holiday spells and weekends.

In light of this, my advice to those who’ve booked a Tioman resort, or want to go to Tioman during the weekend or a public holiday: Book your ferry tickets in advance so you won’t need to worry about being stranded at the departure jetty due to the ferry for that day being already full.

Thanks for this useful and detailed update Tiara.
Do you have the website address where we can book ferry tickets online? We just took our chances when we arrived, and were lucky enough to get our tickets at the ticket office (it was a weekday, mind).