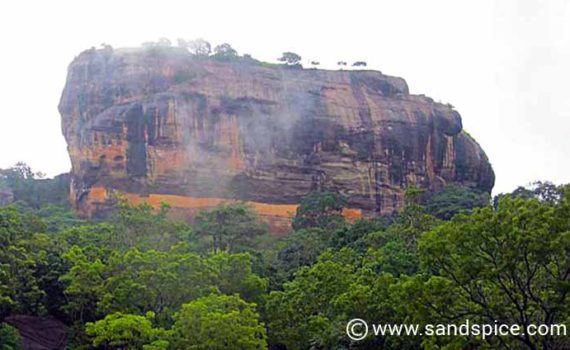 After spending our first wet night in Sigiriya, it was still raining the next morning. However, our plan was to climb to the top of Sri Lanka’s famous Lion Rock Buddhist monument, and a wet day wasn’t going to stop us doing that.

Before that, we had a look around the grounds of our guesthouse – The Paradise Inn. It was all very lush and green, with a clear unobstructed view across to the Lion Rock. There were tall teak trees growing in the gardens, and extended areas of rice paddy fields which our host cultivated and his wife used to prepare our meals. 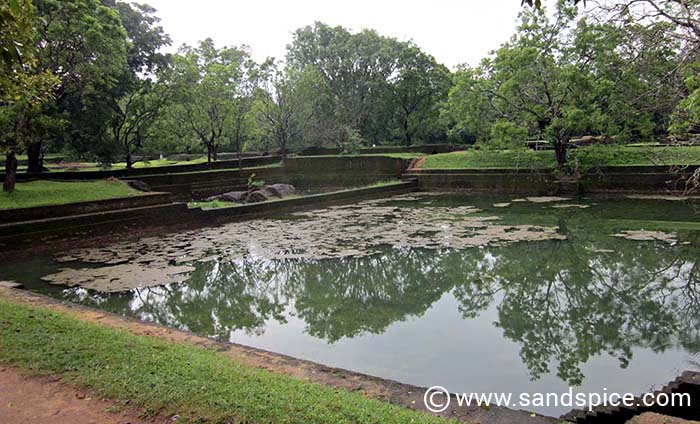 The name “Sigiriya” (literally “Lion Rock” in Sinhalese) refers to an ancient fortress palace built on top of a massive column of rock. The rock is nearly 200 metres high – so quite a steep climb. To climb up you need to be in reasonably good physical condition and obviously not afraid of heights.

The palace was built around 1600 years ago and is surrounded by picturesque water gardens and terraces. It was later abandoned, then used by Buddhist monks as a monastery.

By the time we reached the main entrance to the huge rectangular Lion Rock complex, it was beginning to pour down. We had borrowed an umbrella from the guesthouse, so had some shelter from the heavier downpours. The entrance fee is $30 per person (open 8:30 am to 5:30 pm). Once past the main gate, the area is quite large. Including visiting the gardens and the rock climb, the whole visit took us around 2-3 hours. 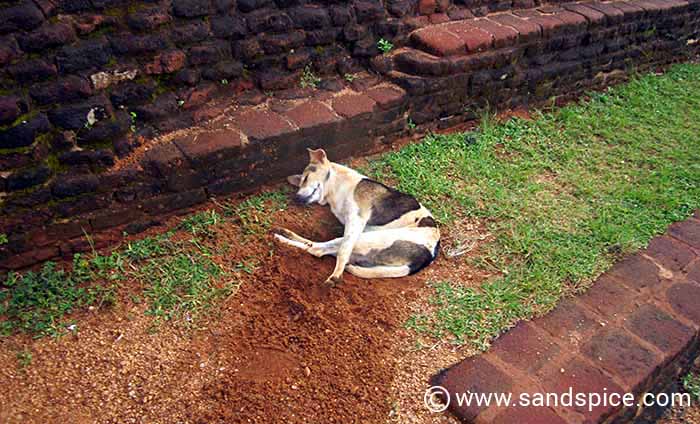 Yep! It’s that time of day

There are a lot of monkeys roaming around the lower areas of the rock, doubtless attracted by handouts from the tourists. There are also lots of dogs (much less active than the monkeys). The dogs seem more interested in digging out a hole in the ground and then tucking themselves inside for a cool afternoon kip. 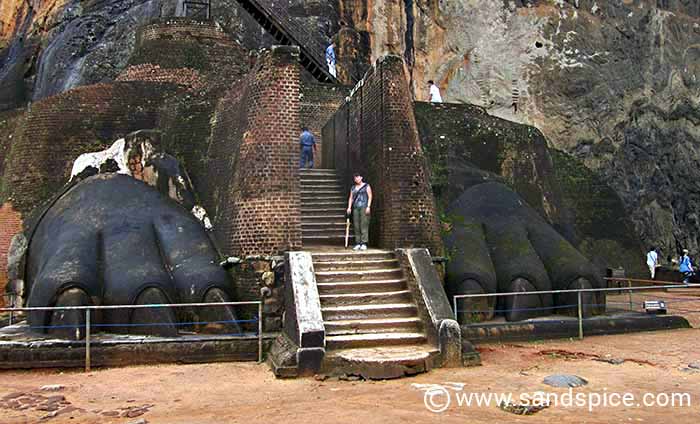 Pause between the Paws

On a small plateau about halfway up the side of the rock you arrive at a gateway in the form of two enormous lion paws. It’s from this point that the vertical ascent really starts. 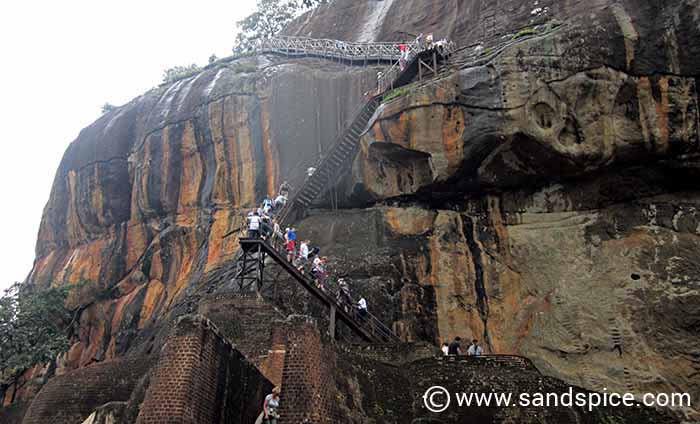 Those monks managed to get up without a nice walkway

There are narrow steel walkways across the sheer areas of the rock face. For the trickier areas, they provide double footbridges to allow for the 2-way traffic travelling up and down. It can also get quite windy higher up, and you can feel some movement in the walkways.

We stopped every hundred yards or so to catch our breathe and take in the spectacular views. 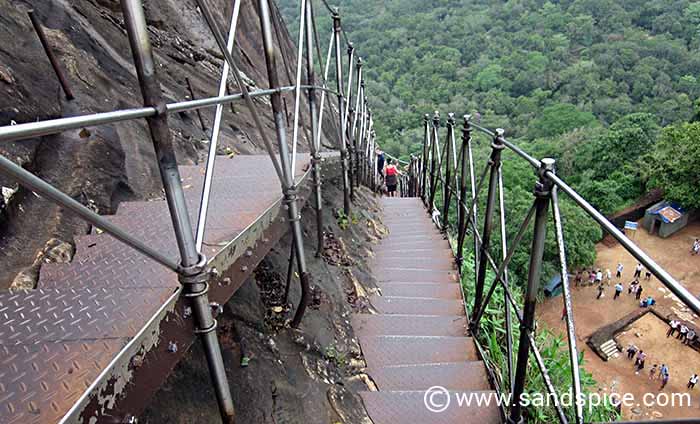 How on earth must the Lion Rock Buddhist monks have felt 500 years ago, climbing this rock without any of the stairs and safety rails that we were enjoying?

In some of the more protected areas of the rock face, there are colorfully painted frescoes: Mainly buxom ladies in skimpy attire. I assume it wasn’t the monks who painted these; there again, it must have gotten pretty lonely up on the rock for months on end. 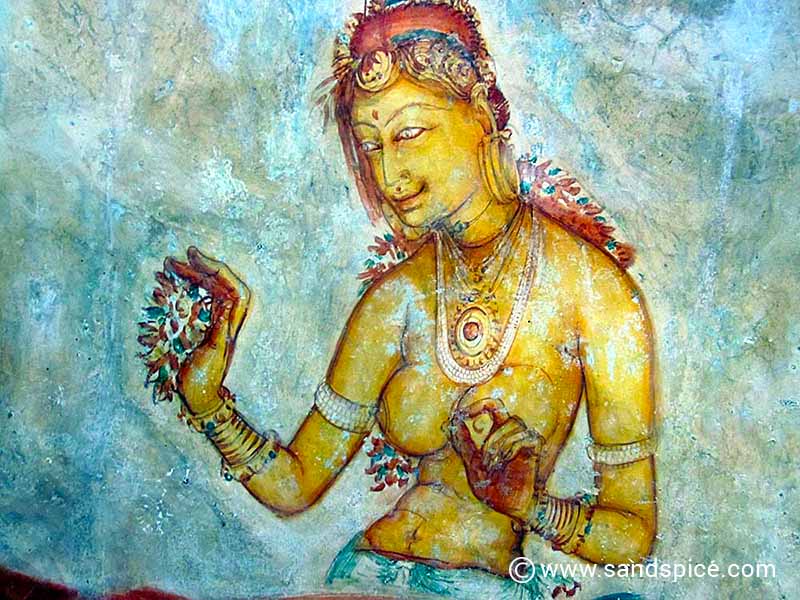 In this upper area, there is also a Mirror Wall. Apparently, it used to be so highly polished that the king could admire himself when he walked alongside it. Later, it became a place where visitors scribbled graffiti.

There’s no longer much to see there.

Summit of the Lion Rock

When we emerged at the top of the Lion Rock we were greeted with panoramic 360° views of the countryside. To the West, you can see a single White Buddha emerging from the surrounding jungle. This marks a small temple which is well worth a visit while you are in the area. 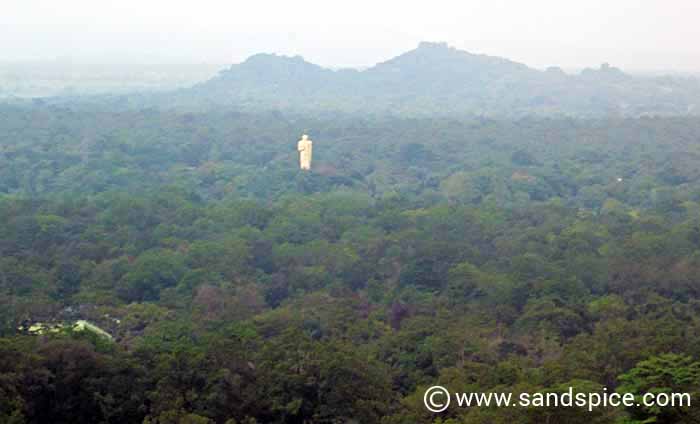 I can see my guesthouse from here!

The top of the Lion Rock is a very pleasant place to relax and observe how the wealthy used to live back in the day. In the remains of the palace you can still see the water gardens and trappings of luxury in a place which must have felt impregnable.

How long they could have survived a siege up here is another question altogether.

Build Your Own Stupa…

The Lion Rock Buddhist monks clearly left their mark here, and you can also pay your respects by constructing your own little stupa.

After climbing down from the Rock, you can take several pleasant routes through the lower terraces and gardens, and gradually work your way back to the Main Entrance. Not far from the Main Entrance, you can find the Sigiriya Museum. Here you can view some interesting exhibits and dioramas (the entrance price is included in your Sigiriya Rock Fortress ticket). 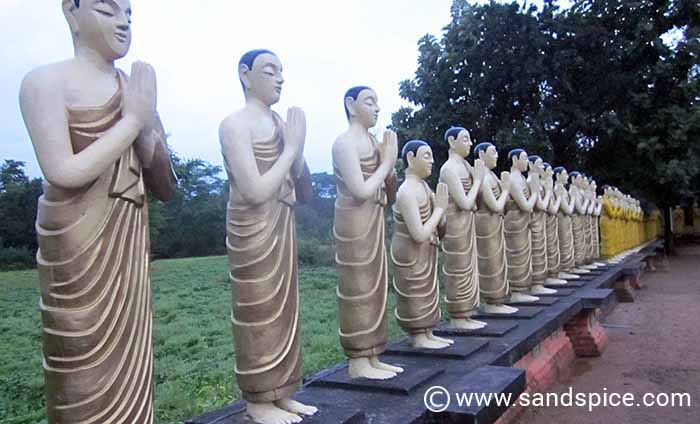 Temple Worshipers: Height is not an issue

Later in the afternoon we visited the Giant White Buddha temple that we had spotted earlier from the top of the Lion Rock. The temple features rows of statues depicting praying monks. Apparently, each statue is unique, with a personalized face, build and height. The story is that they are all based on real individuals who first lapsed from the faith, and later became monks.

The Giant White Buddha himself is impressive, and must be one of the tallest in existence. 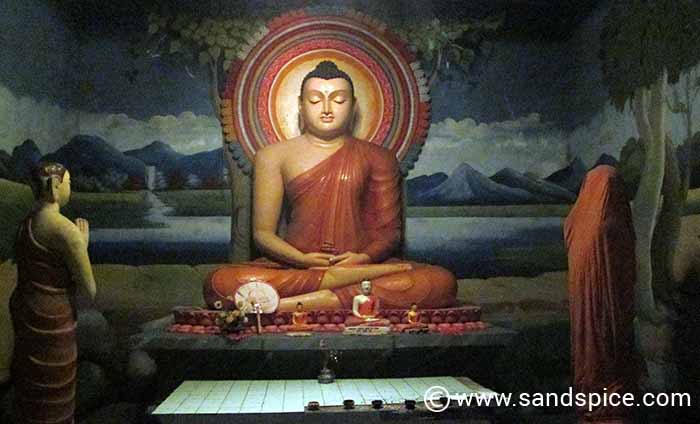 Inside one of the temple alcoves

Monkeys, Elephants and Crocodiles – What more do you want?

The following morning, around 4 am, we were woken by the sound of trumpeting elephants. Not far from our guesthouse is a lake where they come in the morning to wash, and from the sounds – boy do they enjoy it. Later in the morning we wandered 10 minutes down the path to visit the lake. On the way down, we spotted some black-faced Grey Langur monkeys.

There were rice fields dotted around the area – another attraction for the elephants and a headache for the local farmers. Wild elephants are protected by law, and are free to wander wherever they want. If the locals interfere with them in any way, they face really strict prison sentences. Each year, villagers are killed by elephants: They are not allowed to harm the elephants, even in self defense.

To try to protect their rice fields, farmers set up tall lookout towers. Whenever the elephants get near, they mount the towers and make as much noise as possible to deter the animals.

Sometimes it works, sometimes not. 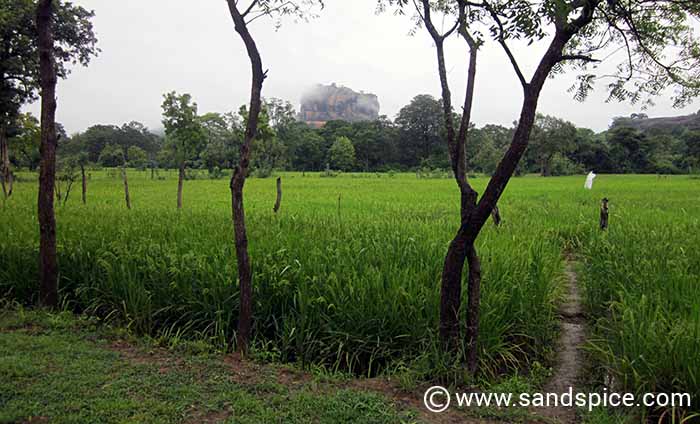 I was looking forward to a swim in the lake (now the elephants had gone). However, I was advised by our cute 12-year-old guide that it might not be a good idea: Maybe there were no elephants in sight, but you can’t see the crocodiles so easily.

In all, we spent 2 days in Sigiriya. It rained for most of the time, which limited our activities somewhat. If you’re travelling at this time of year (February/March), be aware that it can be very wet in much of the hill country. What’s more – when travelling on a budget – once you’re damp it can be hard to get your clothes dry again.

Our guesthouse hostess very kindly ironed my wife’s trousers just before we left to remove the dampness.

Next, we were heading south to the capital  – Kandy. Again, we were planning an early start in order to reach our next guesthouse in daylight.

If you enjoyed Lion Rock Buddhist Citadel, check out our Sri Lanka Travel Plan. You may also like: 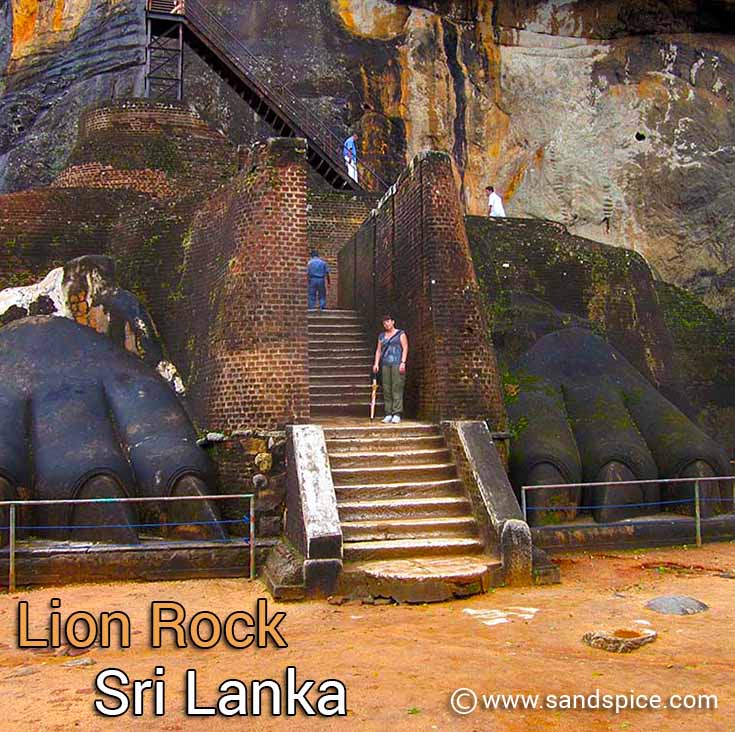 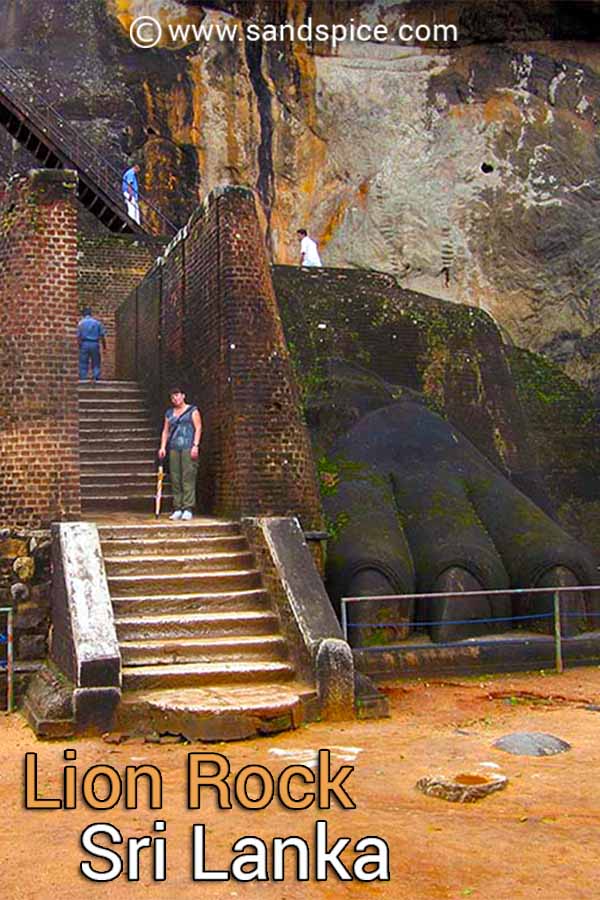 End of the trail. You are pretty much at the entrance of Lion Rock park. Quite nice I am told. Head left down the road.