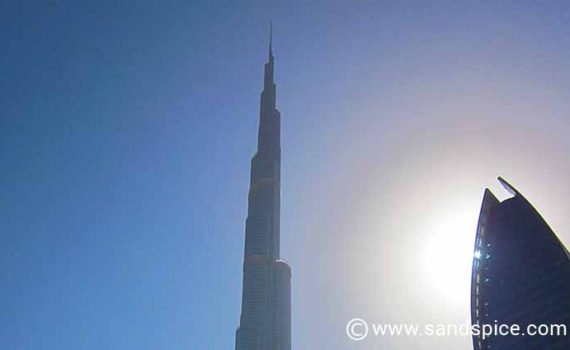 How can you visit Dubai in the United Arab Emirates and not experience the ear-popping heights of Burj Khalifa Dubai – the tallest building in the world?

We’re all used to the high-rise skyscrapers of Shang Hai, Hong Kong and NYC, but the Burj Khalifa exudes a slim eloquence, modernity and quality that surpasses them all. The tower comprises 160 storeys rising to 828 meters (2,716.5 feet).

For it’s height, Burj Khalifa is also a very narrow structure, becoming ever more narrow as it rises. Naturally, there is a limit on the number of people who can access the upper levels at any given time.

Booking your Visit to the World’s Tallest Building

Before we arrived in Dubai (at the end of our trip around Sri Lanka), we read that it is advisable to pre-book a visit to Burj Khalifa. There are nine 1-hour visits to the top per day, and the time-slots can be quickly filled up – especially the popular 5 pm sunset slot. Pre-booking is even more essential if you’ll be in Dubai for a just few days in a busy holiday period.

You can make an online booking at http://www.burjkhalifa.ae/en/

We booked the 5 pm slot, which fitted in nicely with a trip to the Dubai Mall (where the tower is located). This allowed us to do some shopping beforehand, and then get a meal at one of the many eateries afterwards. 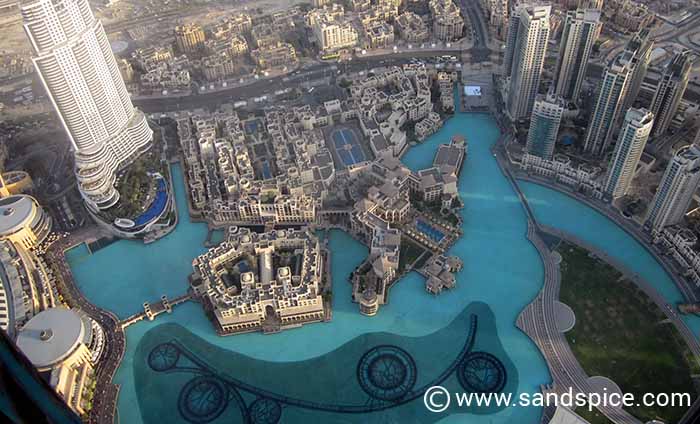 Looking down at the fountains from the top of Burj Khalifa

If you already have your tickets when you arrive, you need to check in around 15 minutes before your time slot. Otherwise, there is a risk your place may be sold off to somebody else arriving on the off-chance.

There is a pleasant reception area where you can wander around before being admitted to the 65 meter-long travelator. The travelator takes you on a trip through time from the earliest days of Dubai to the present. This is like an animated history of the building of the tower.

Somewhere during our wander, we were photographed against a blue screen. This is all very VIP red-carpet, but we didn’t find out what it was all about until near the end of our visit (see below).

At the end of the travelator, you begin your vertical ascent to the observation deck via a high-speed elevator, travelling at 10 meters per second. As the doors open, floor-to-ceiling glass walls provide a breath-taking unobstructed 360-degree view of the city, desert and ocean.

The ascent will make your ears pop, so remember to swallow frequently.  We ascended 125 floors in 40 seconds. 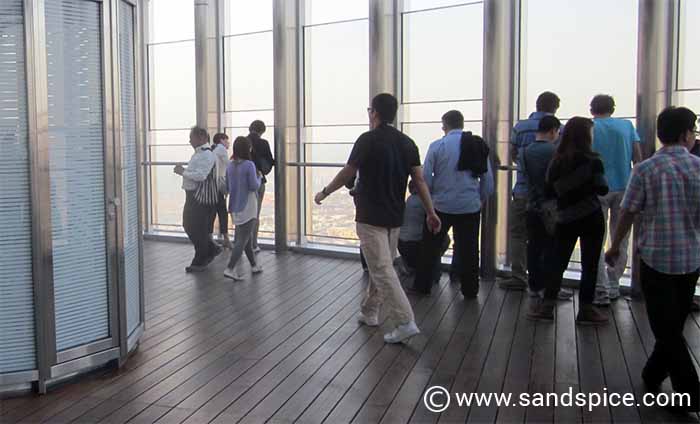 360 Degree Views At the Top

At the top, we were free to wander around the enclosed observation lounge, and take pictures. The At the Top Burj Khalifa tour typically lasts 1.5 hours. However, you can linger as long as you like before making the return journey to the base of Burj Khalifa.

You’ll be taking with you a fuller appreciation of this architectural wonder and a deeper understanding of Dubai’s remarkable vision.

You can shop At the Top and take home a souvenir of your visit. 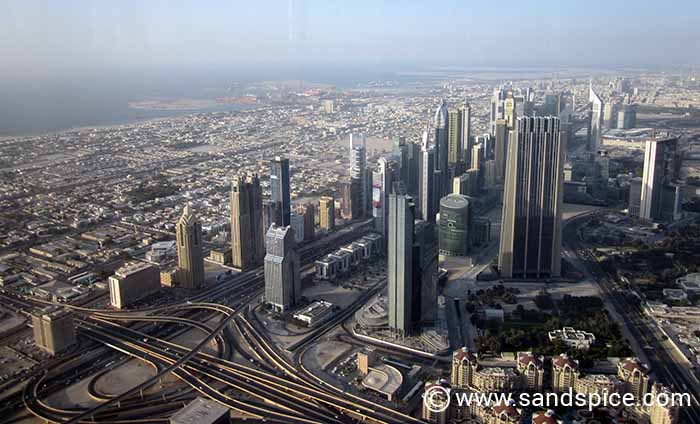 From the observation lounge, it’s clear to see that there is still a good way further up the tower to go before the very top.

Unfortunately, you won’t get the chance to experience the apogee of the tower. That is, not unless you happen to be Tom Cruise, who famously had himself filmed sitting on the very apex of the tower.

This incident took place during the filming of Mission Impossible 4, which used Burj Khalifa as a backdrop for various computer-enhanced shenanigans. 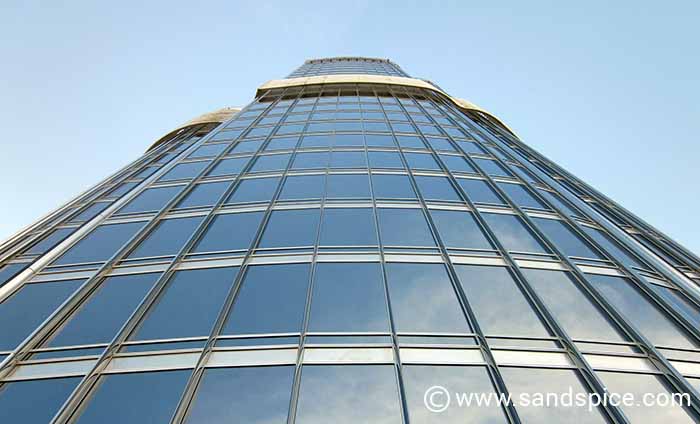 After descending back to ground level, you are subjected to some high-pressure marketing as a multitude of pretty young girls try to sell you personalized photographs of your visit to the tower. The photographs they took earlier have now been developed, featuring you posing in front of a magnificent tower backdrop.

Save yourself some money, politely refuse, and take your own photographs if you really want to impress the folks back home. 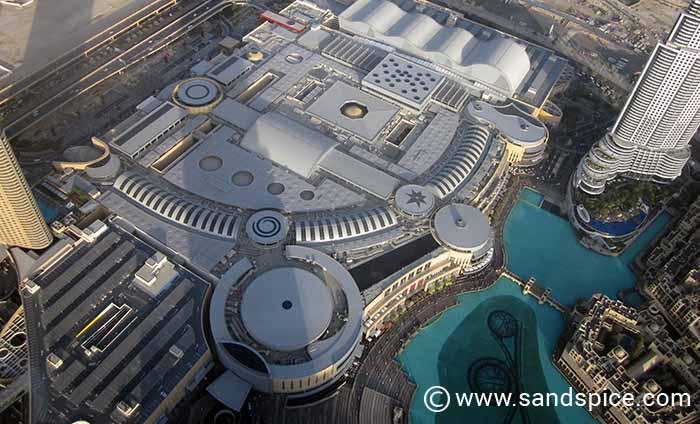 If you enjoyed Burj Khalifa Dubai, check out our other Short Breaks & City Stops. You may also like: 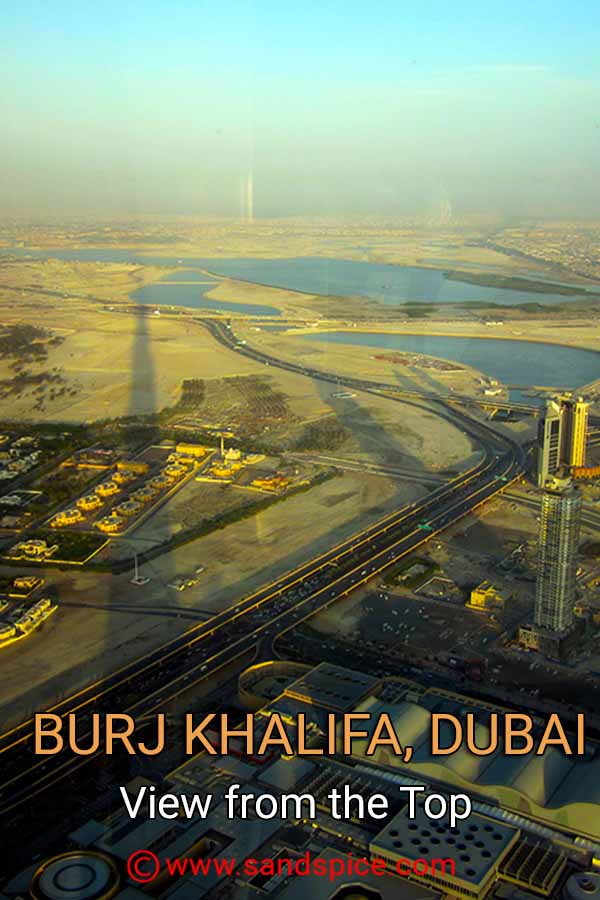 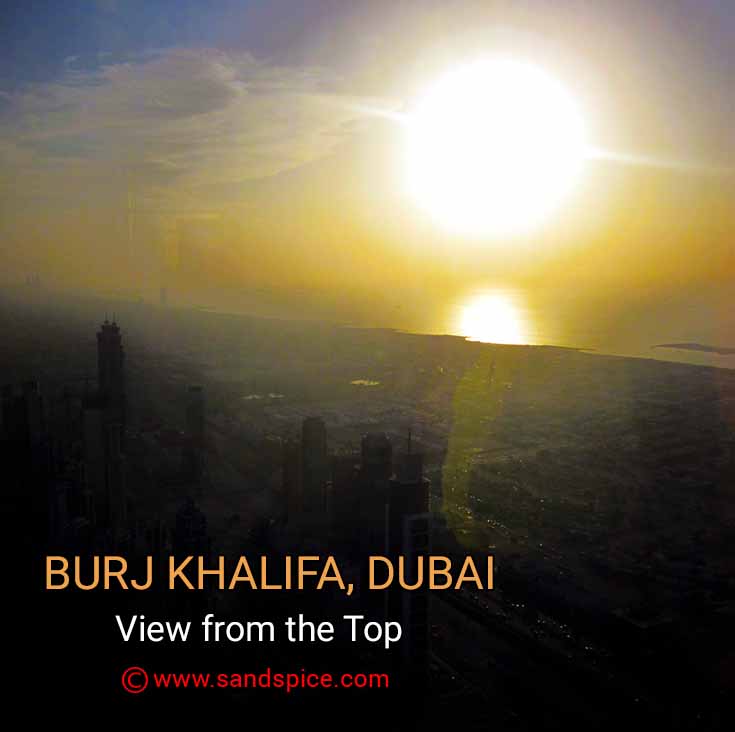 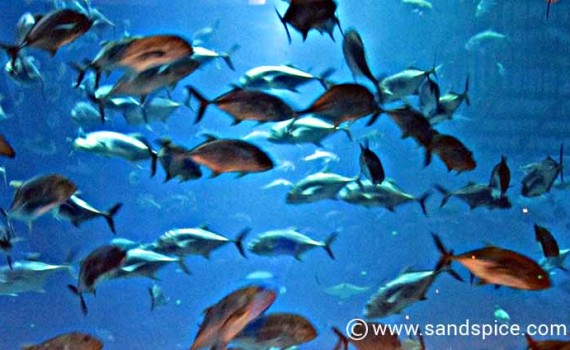 Dubai seems to be all about extremes. Not only do they have the tallest building in the world, they also boast the Dubai Mall – The largest shopping mall in the world. Here, you can find one of the largest suspended aquariums in the world, with the world’s largest acrylic panel.

…oh, and just for good measure (as they’re in the middle of a desert) they’ve also got an ice rink that can host up to 2,000 guests.

Following an extensive trip around Sri Lanka, we’d planned a 3-day stopover in Dubai on our return flight home. Shopping was therefore high priority, and where better to do it than the Dubai Mall?

If ever there was a zombie apocalypse, the Dubai Mall is the place I’d want to be holed up in. 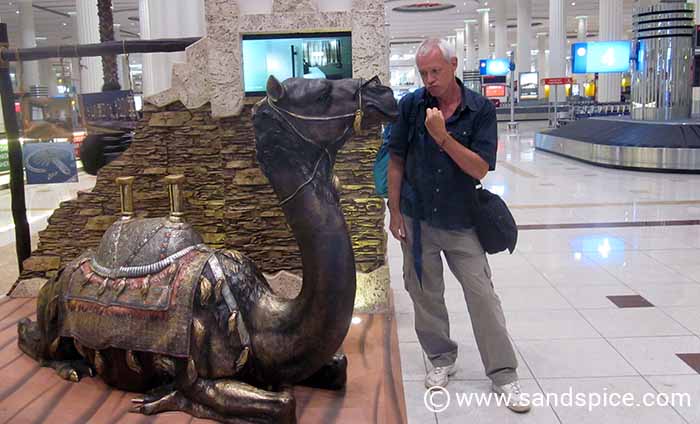 Don’t take no nonsense from these camels

A bit like the Vatican Museum in Rome, you will need several days to properly discover Dubai’s central shopping mall. Unlike the Vatican, you won’t have to queue up to do it (unless you’re going to the top of Burj Khalifa).

To give you an idea of the scope of the place, we wandered into a ladies fashion shoe area (more accurately, I was led into there by my wife…).

After what felt like an age, I felt a panic attack coming on as I realized I could see no way out. Wherever I looked  – for hundreds of yards in every direction – were display-after-display of ladies Italian and French designer fashion shoes. I’m talking Louis Vuitton, Gucci and Christian Louboutin.

Thank Heavens the prices were displayed in AED so I didn’t need to face up to the horror of the actual costs in denominations I understand.

Over 13 million square feet in total (equivalent in size to more than 50 football fields), the Dubai Mall has an internal floor area of 5.9 million square feet. It also has a 250-room luxury hotel, 22 cinema screens and 120 restaurants and cafes.

So getting a bite to eat is not a problem.

For me though, the big attraction had to be the Aquarium.

If you wander for long enough after escaping the designer fashion outlets, sooner or later you will be confronted with a huge blue-lit see-through wall behind which is contained more than 33,000 living animals, representing more than 85 species including over 400 sharks and rays combined.

As both centerpiece and counterpoint to the Mall, the effect is fascinating, relaxing and hypnotic. 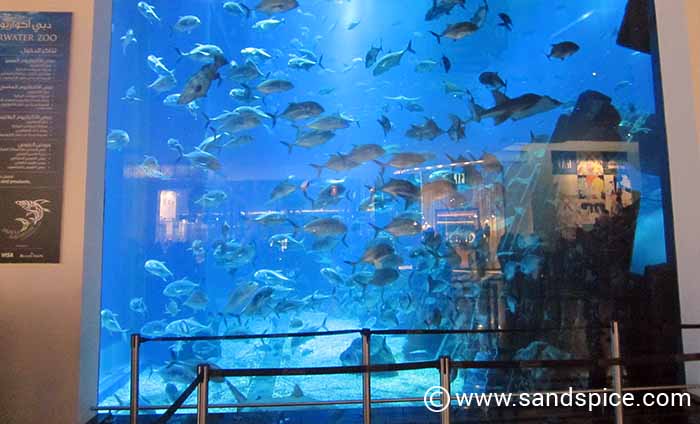 If you’re so inclined, you can even become an active part of the aquarium. You can opt for an even closer encounter with the aquarium’s inhabitants by booking a Cage Snorkeling Experience.

All you have to do is put on snorkeling gear, dive into the secure cage in the aquarium, and watch over 70 different marine species at close quarters.

For the more adventurous, qualified divers are allowed to dive freely with the sharks under the supervision of a dive master.

All of this is no doubt great entertainment for the shoppers looking in from the outside. 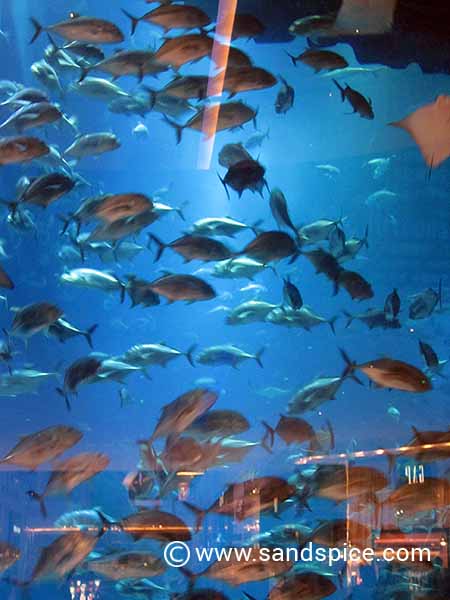 Outside the Mall – Dances With Water

When you’ve had enough of shopping and shark-feeding, why not mosey on outside and take a look at (yes, the World’s Largest…) Dancing Fountain.

From the Burj Khalifa Lake, the Fountain shoots water jets as high as 500 ft (150 meters), equivalent to that of a 50-story building. The Fountain has five circles of varying sizes with two central arcs, and operates in synchronization with classical, Arabic and world music.

The beam of light shining upward from the fountain can be seen from over 20 miles away, and is visible from space making it the brightest spot in the Middle East, and quite possibly (… you guessed it) in the entire world.

… and the Zombie Apocalypse really is coming

It seems the management of Dubai Mall took on board our earlier comments about the upcoming Zombie Apocalypse. They are now planning to open the first full-sized, virtual-reality Zombie Apocalypse Park.

The Zombie Apocalypse Park will span 65,000 square feet (plenty of room for the undead to roam), with zombie apocalypse attack and zombie runs.

If you enjoyed The Dubai Mall, check out our other Short Breaks and City Stops. You may also like: 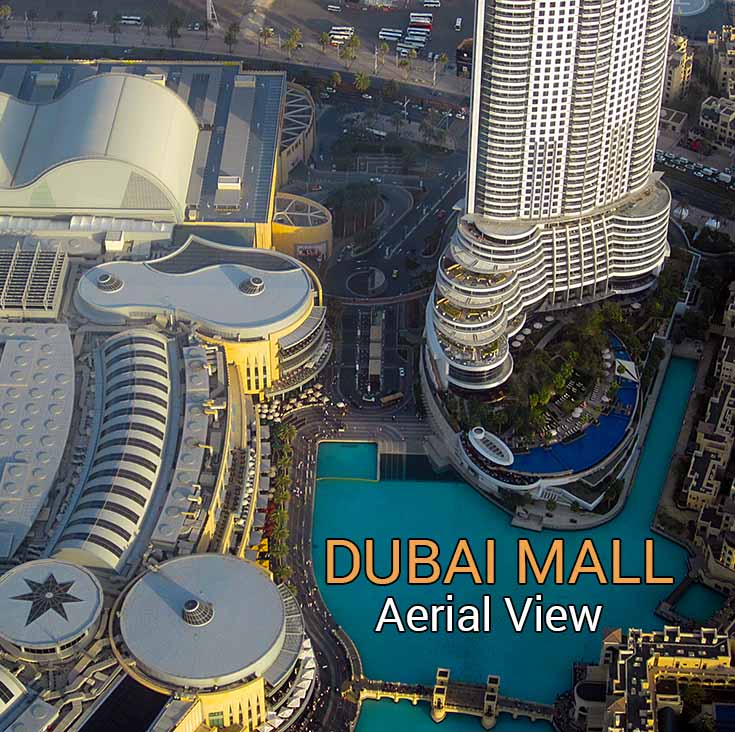 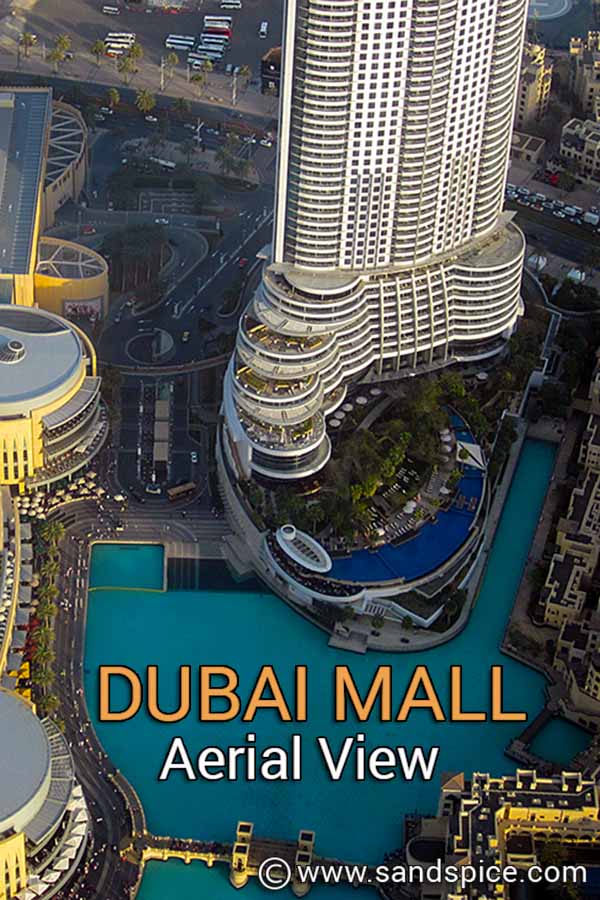 Our short 3-day layover in Dubai included visits to the largest shopping mall in the world as well a[...]

Dubai seems to be all about extremes. Not only do they have the tallest building in the world, they [...]

How can you visit Dubai in the United Arab Emirates and not experience the ear-popping heights of Bu[...]

Taking into account the ever-increasing restrictions and delays involved in long-haul travel, there [...]