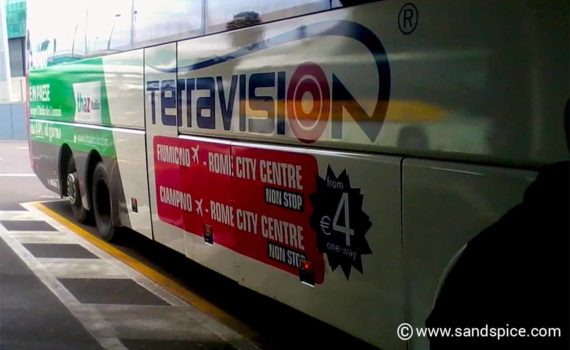 Getting from either of the airports outside Rome to the city center can be an expensive business. Fortunately, there are some inexpensive and efficient alternatives to taking a taxi. On different occasions, we’ve used the Terravision Rome airport bus service to travel between both Fiumicino and Ciampino airports and the center of Rome.

These services are apparently great value for just €5 (Ciampino-Rome one-way) and just €5.80 (Fiumicino-Rome one-way). This is a big saving over a taxi fare of €40 to €50.

You can safely purchase your bus tickets in advance online. This way the tickets are a bit cheaper and you’ll avoid any hassle finding the ticket booth and queuing to buy them when you arrive.

Our First Experience with Terravision

The first time we used Terravision (several years ago) the service was well organized and comfortable, with buses running every 40 minutes or so.

There was no scramble to grab seats. A very efficient young lady kept busy organizing customers into an orderly queue, resulting in quick and efficient boarding. 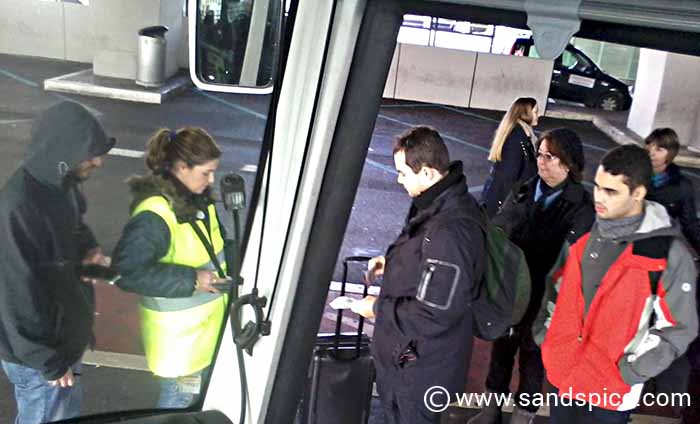 The bus travels directly (no stops) to the central bus and train terminal in Rome (Termini). From here, you can jump on the metro and travel on to your hotel/guesthouse. Although not extensive, the Rome metro system can usually get you within reasonable walking distance of your destination.

If you use the Terravision service to travel back to the airport, you need to exchange your travel voucher for a boarding card at the ticket office behind the Termini station (before boarding). It can get busy at the Termini office, but booking in advance will ensure you get a seat on the bus at the time you need to travel.

Give yourself plenty of time – there can be heavy traffic when travelling out of the city center.

You can also take a train from Fiumcino airport to Termini. Trains run every 30 minutes, but the tickets are considerably more expensive at €11 (one-way).

Our first experiences with Terravision had been positive. Fast-forward to the present, and things appear to be deteriorating into Terravision Turmoil.

As usual, we booked our tickets online, and arrived at the airport bus stop a good half-hour before our bus was due to leave. There was a large crowd of passengers waiting to board, in a very loose impression of a queue 🤨. 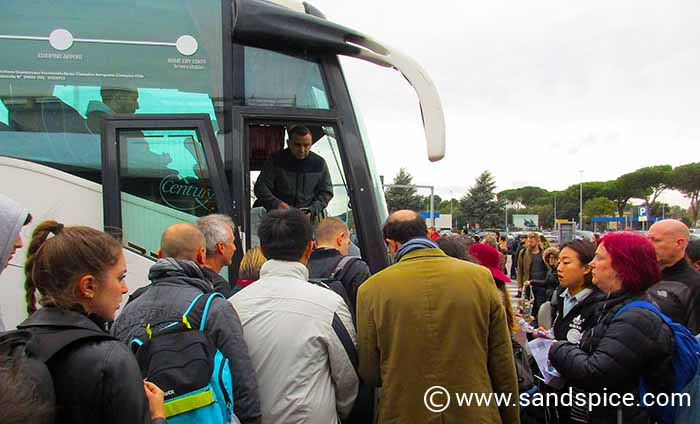 Apparently there was a shortage of buses. They were running only once per hour with a maximum seating of 58 passengers per bus. After waiting in line in the wind and rain for over an hour, the single Terravision representative informed us that there was no guarantee we would get on the next bus.

Since the next bus hadn’t even arrived, the prospects of getting into Rome anytime soon on a Terravision bus were looking bleak. 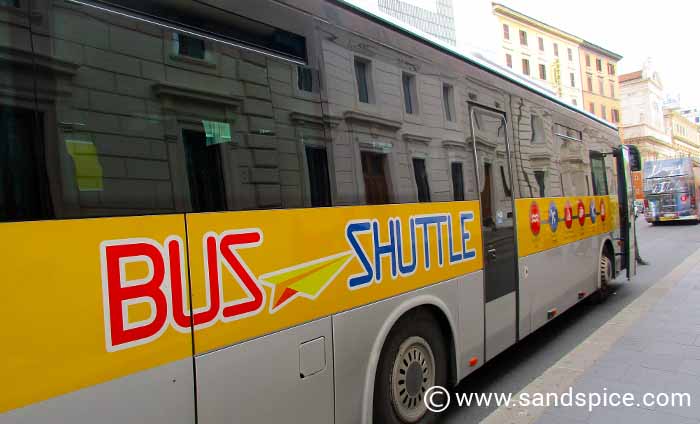 All this time, we’d noticed buses regularly arriving and leaving at the adjacent bus rank. After inquiring with the driver of the Bus Shuttle company, we discovered we could leave in 10 minutes on his double-decker bus for €5 each.

Wishing to waste no more time standing in the rain, we paid an extra €10 and took the more spacious double-decker bus. 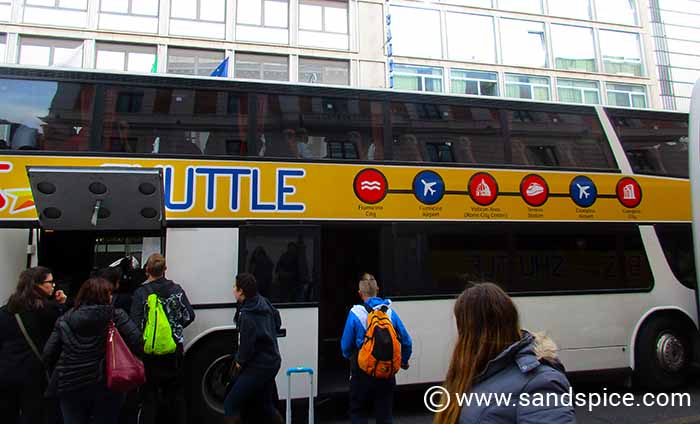 The Ciampino Bus Service is the Worst

The main problem seems to be with journeys from Ciampino airport to Rome. Since Ciampino deals mainly with budget airlines, there’s a larger number of travelers likely to choose the cheapest transfer option – which is Terravision.

Many of these travelers turn up without tickets and try to board ahead of the travelers who have tickets. Queues disintegrate, and with just one Terravision representative it all becomes a bit of a scrum. 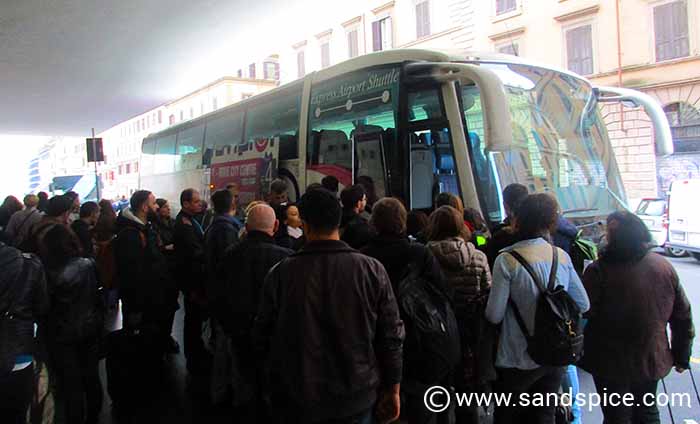 Terravision Rome Airport Bus – Is it worth the hassle? 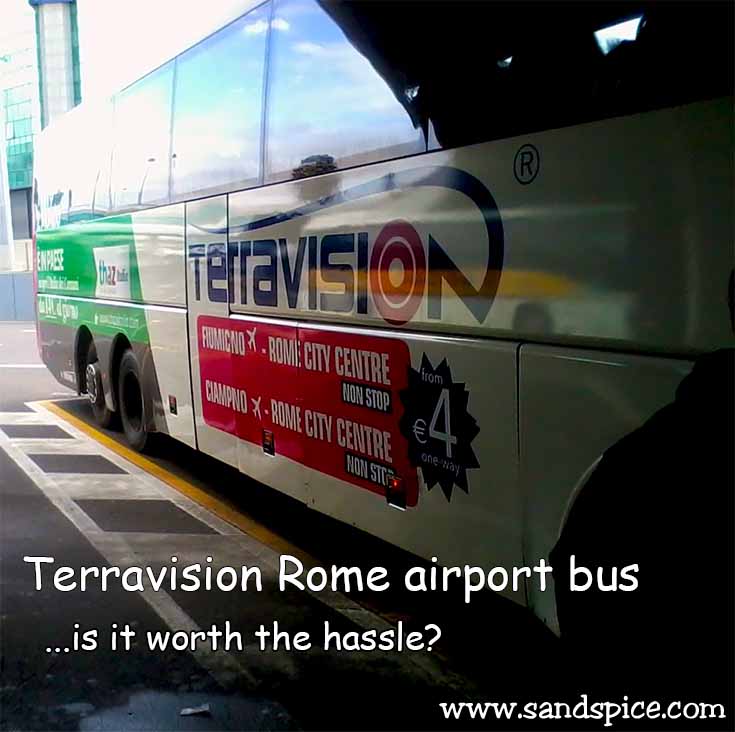 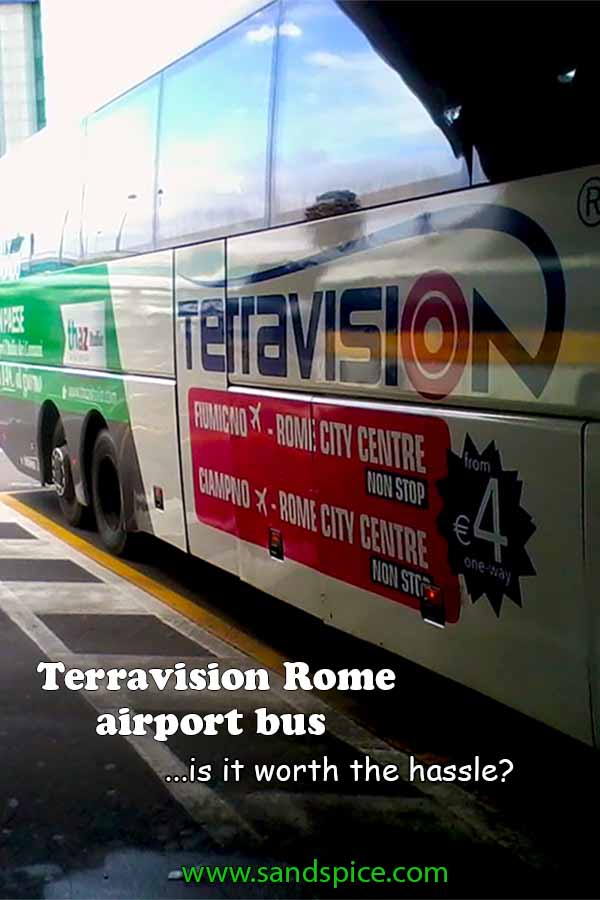 The train is way easier. Cheap too.

NEVER USE THEM !!! Bunch of crooks. Charge you for a service they don’t provide.

Never use them. Thieves!!!!

We had a similar negative experience with Terravision on our last trip. From a good beginning, it seems they now might be losing the plot…

They seem to be expanding their network to new cities, catering especially to Ryanair destinations like Liverpool, Eindhoven and Malta.
Good news for budget travellers!